Colourful and inexpensive fruit and veg in Cyprus

It's been a while since I wrote. We've had a very cold spell in Cyprus and, more recently, an unseasonably warm few days. We've had work done on the house, which means there's a lot of cleaning and some repainting to do next week before our next visitors.

There is a great deal that I could write about, and perhaps I will in the next few weeks.  But on Friday, Richard was out for the morning so I did my weekly shopping on foot, using my trolley to transport food home. The main part of what I bought - indeed, the main part of what we eat - was fruit and vegetables.

As I brought it all in, and started unpacking, I realised again what good value fruit and veg are in Cyprus. They're mostly fresh, they taste extremely good, and there are usually slightly older items on sale at even better value than normal.

So here's what I bought on Friday: 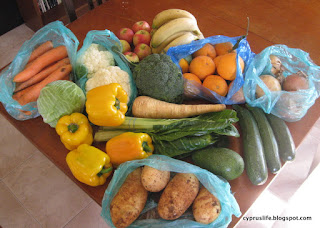 Some of the carrots, cauliflower, peppers and courgettes were to take to a shared meal on Friday evening. But other than that, I was only buying for the two of us for the weekend (three on Sunday), and a couple of days next week; I'll buy some more fruit and veg on Wednesday.

We already had some oranges, cucumbers, tomatoes and mushrooms, and also garlic, so I didn't need any of those; just as well, as my trolley was very full, even though, laid out like this, it doesn't look like a lot for five days. We needed some lemons, too, but our good friends have a prolific lemon tree so they gave us a couple of dozen of them this morning.

I've been so long out of the UK that I have no idea what this amount of fruit and veg would cost there. They're not organic - but they're unwaxed, loose, and - mostly - locally grown.  I had thought this would be around €15-18 and was pleased that the total was slightly less than €13.50.  That's about £10.50 in the UK by today's exchange rate (or just over $19 in the US).

Oh, and for those who are concerned about the environment, I did get a lot of small plastic bags (more than are shown in the picture) but I re-use them for cat litter, so they're not wasted. The shop has a system whereby pink bags are the special offer items, green (though they look turquoise in the photo) are the main ones, and the final aisle are blue. Not using bags would make everything more complicated for the checkout people - and I do take my own larger cloth bags to pack them in.

We bought a red pepper the other day for R15. Thats about 1 Euro. I see you had three yellow ones. Here they sometimes come packed as "robot peppers" -- one read, one yellow, one green. A "robot" isd a traffic light to you. We have taken to planting the seeds and growing them in our garden because they are so expensive. Our tomatoes have been doing quite well.