I mentioned at the end of my last post that we started using our air conditioners on Friday, very thankful that we had them cleaned in advance. It's not unusual to become warm enough for air conditioning towards the end of June (anything over 30C counts) and occasionally we've had heatwaves this early in the year, but they're not usually as lengthy as the one which the island is still coping with.

This brief article about Cyprus in summer, written nearly a week ago, explains that the usual temperatures for this time of year are around 35C inland, and just over 30C at the coast. However there was a low pressure system, and it was a great deal hotter already, with predictions of 41C inland by Tuesday.

All of which is inconvenient, but I am very grateful for the ability - mostly - to keep cool. Far worse are the horrendous forest fires which are blazing in parts of the mountains of Cyprus. Started by careless people burning rubbish, over 15 square km of land has been destroyed, and at least two fire-fighters have lost their lives.

Fires are still raging, and volunteers are being asked to help, as it spreads towards some of the villages. Aeroplanes from Cyprus and several other countries are using sea-water to quench the flames; inevitably the salt will damage the forests further.

Back to everyday life... I didn't get my walk by the Salt Lake last Saturday, due to Alex being stuck on a neighbouring balcony, and yesterday I didn't wake until nearly 6.00. It already felt warm by then; but I wanted to see how empty the lake had become, so suggested Sheila and I walk at least a little way.

Last year was cooler overall with quite a wet winter, but we haven't had nearly so much rain this year, and Summer has come earlier. So this is what we saw: 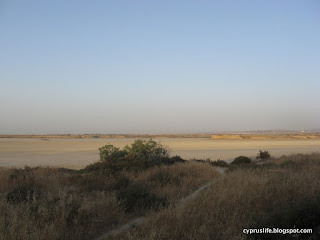 There's still a little water some way out, but if this heat continues, it will have dried out entirely by the end of June.

I was struck by how very tall some of the weeds had become. Sheila kindly agreed to be in the photo too, to give an idea of scale: 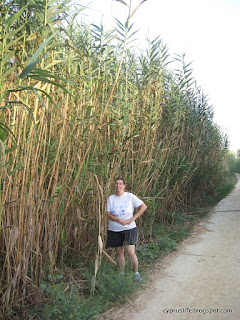 They're already looking brown, however, as is much of the other foliage.

We walked less than a kilometre, and I was already feeling too hot. We still had to go and feed my son's cat, as he was in the UK, so we made our way back; it was probably a bad idea to go at all as I felt very headachey by lunch-time, and unbelievably tired.

Our house is much cooler than outside but the thermometer on the kitchen scales was showing 32C by 8.00 in the morning.  I realised that although the humidity is still relatively low, it's a problem that the heatwave has come early, as it's the Summer Solstice period, meaning it's light before 5am, so the sun warms everything up much earlier than it does in August, when we expect higher temperatures.

The heatwave is predicted to continue for at least another week. The humidity is 'only' at around 39% at present, which means that evenings and nights are not as unpleasant as they can feel in July. But even 39% humidity means that the temperatures feel hotter than they actually are. According to this chart, we're at 'yellow' alert (great discomfort) as far as heatstroke and other dangers are concerned. Inland, where the temperatures are due to rise to 40C or higher, it will be 'orange' alert, defined as dangerous.

So as far as possible I am estivating.

We were under a heat warning on the weekend. Generally, spring was colder than usual, but we've had two rather torrid heat spells. The first didn't last long; the second was about 5 days. We are back to normal, or below normal, now.