Another Adventure for Alexander....

For his first year living with us, our cat Alexander kept his own blog. With a little help, of course. As our two-year-old grandson realised today, while having a conversation with me on Facetime, cats don't have hands. That makes it remarkably difficult for them to type.

Around the time he was a year old, Alex discovered how to get out of the house from our utility balcony (where the cat litter is kept), leaping over a metal roof and down. There was no longer any way of keeping him in, and we decided to install another cat flap over our spiral staircase, so that the other cats could get in and out relatively easily.

With Alex's increased explorations of the neighbourhood, I had far less idea of what he was doing and his blogging ceased. It had been fun, but - we thought - he was turning into a more sensible cat who was less likely to do anything silly.

Then just before Christmas his sister Joan disappeared, and Alex - we assume - was in some kind of accident. We weren't sure he was going to survive, at first, but with a lot of TLC, and some pain relief from the vet, he pulled through and by the end of January was back to his normal self, going out and about, trying to follow us when we walked places, and generally being a likeable, if sometimes demanding cat.

We had an incident in February, when our damp proof course was installed, and Alex got stuck up a tall pine tree. He made a great deal of noise but resisted all attempts to tempt him down, and struggled to get out of Richard's arms when he put a long ladder rather precariously up the tree in order to rescue him.

Then he was sensible for a while, lulling us into a sense of false security.

When I woke this morning, around 5.30am I realised that Alex had not been in the room all night. My toes had not been bitten, and I had not been woken by any scrabbling at the door. With the much warmer weather, he's been sleeping all day and going out at night, so I wasn't too worried at first. I got up, went to feed Cleo, and texted my friend Sheila to say that I was about ready to go for our usual early morning walk.

I didn't have a reply at first, so I thought perhaps she was still sleeping, and decided to see if I could find Alex.  As I went down the stairs I heard his mew, loudly and clearly.

I looked all round, and it took me a few moments to locate him... on the upstairs balcony of one of the neighbouring houses: 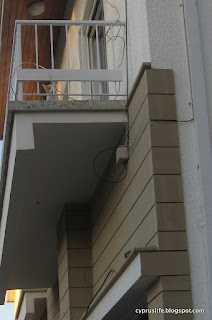 I assumed he could get down, since he had evidently got up there, and walked along the front of the house, calling to him. At one place there's a gap before another balcony, and there's a ledge below which is quite wide enough for Alex. It's less of a jump than he makes regularly to get out from our utility balcony. 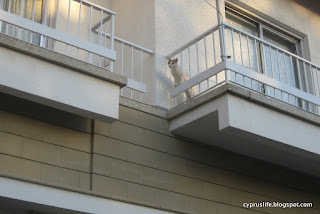 But he wouldn't do it. He jumped to the other balcony and back again, mewing the whole time. I began to wonder if the neighbours had gone away, as nobody was appearing from the house. This is Kataklysmos weekend - the Eastern and Orthodox Pentecost - and Monday will be a major public holiday, so I wouldn't have been surprised.

I wondered if he would do better if I stopped watching him but when I went back into our house for a minute, he stopped mewing and started howling. I was worried he might wake the entire street! So I went back outside.

At that point Sheila appeared and we discussed what to do. I'm not at all good in a crisis of any kind; I was prepared to keep walking up and down and encouraging Alex to try and jump down, but Sheila is better at taking action.  She went to try and get a ladder that we keep at the back of the house, but realised that it was impossible to get at currently. 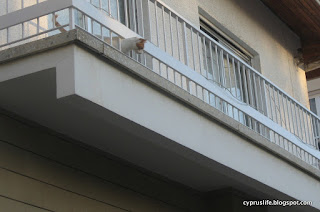 So I went to ask Richard where our step-ladder was, and then found it in our guest flat. It wasn't really high enough but Sheila went into the neighbours' front yard and climbed to the top, then reached up... and Alex pulled away from her grasp. As when he was in the tree, it appeared that he didn't want to be rescued, or didn't trust his rescuer.

Sheila then managed to climb onto the ledge itself. I was holding the ladder, which was wobbling precariously, so couldn't take any more photos...

Then a door on the other balcony opened, and a tousled head looked out. Sheila spoke to someone in Greek - there are new tenants in that part of the house, whom we don't know - and they opened another door for Alex to go in, and let him out of the front door. We thanked her profusely and she said it was nothing; that she had heard the mews but had not realised it was so close!

Alex was rather subdued, and we didn't go on our walk; perhaps just as well as there's been a major heatwave today with shade temperatures up to almost 40C. We are very glad that the air conditioners were cleaned a few weeks ago, and started using them, when needed, yesterday.