Back in Cyprus, Lady Jane and the gradual end of Summer

When our son Tim moved back to the UK early in August, his cat Lady Jane Grey moved to our house, at least for now. Tim's new job is temporary and his accommodation not appropriate for a cat. Lady Jane is Alexander the Great's sister. Yes, historical chronology is a little skewed. Their other sister, no longer with us as long-term readers might recall, was Joan of Arc. And our elderly, eighteen-year-old cat is Cleopatra...

However, Lady Jane had lived in Tim's flat for two years as an only cat, and had apparently forgotten that other felines exist. The first stage in her adoption into our house was to bring her to our guest flat, where Tim stayed for about three weeks after moving out of his flat, before flying to the UK.

That in itself wasn't too traumatic, although when she arrived she didn't want to emerge from the cat carrier for quite some time.  When she eventually did, she hid on some bookshelves: 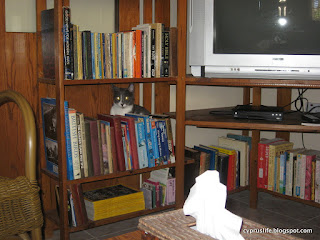 After a few days of very tentative exploration, she became rather more at home in the guest flat. Unfortunately her initial introduction to Alex was extremely stressful. We let them 'meet' through a gap in a sliding door, and Alex wanted to play. Jane saw this as a terrible threat; she growled and spat.

Then Alex managed to get into the flat - twice - when the door was briefly open. He saw a new playmate. Jane saw an enemy.  There was a great deal of noise and she refused to look at any human who was involved in the trauma, for quite some time.

But before Tim flew back, we knew we had to move Jane up to our part of the house. Tim's old bedroom became her 'safe haven', as advised on several websites, and we put some of his furniture there. She spent a lot of time sitting on her cat tree looking out of the windows: 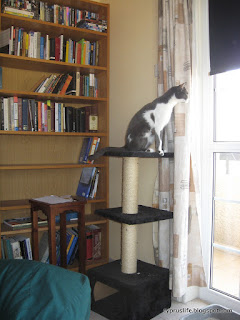 We tried letting Alex and Jane see each other through narrow doorways, but it wasn't encouraging. He lay down, evidently wanting to wait. She growled and hissed and spat, apparently terrified.

At the suggestion of a Facebook friend, we acquired some of the plug-in artificial pheromone Felliway to use in Jane's room and the living room for a month. She did seem a little calmer after a couple of days, but perhaps that was a coincidence.

When I went away to the UK for three weeks, we were still keeping her shut in her room most of the time. She didn't seem to mind, but did like exploring a little further when Alex and Cleo were shut downstairs.

Richard reported progress over the three weeks that I was away. She and Alex got a little closer. She didn't growl quite so much. She didn't seem to understand how to play, but he was very patient. He started letting them be loose in the house when he was home. Jane started having food in the living room...

By the time I got home, she was a lot more amicable than she had been. Was the Felliway responsible or would it have happened anyway? We have no idea. But we like to think it probably helped.

A day or two after I got back, Jane was in the kitchen asking for 'wet food' at lunchtime, so I put hers on the boot tray that we use for cat food dishes... and for the first time all three cats ate together: 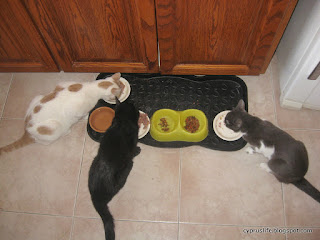 Since then, she and Alex have been very friendly, chasing each other, batting each other in a play-fighting way, and even rubbing noses sometimes. Jane still doesn't like Cleo and spits at her whenever she sees her, but we suspect that she's trying to establish dominance and doesn't understand that an elderly matriarch is de facto the queen of the feline household.

Meanwhile September's weather has, far too slowly for my liking, been cooling down, and the humidity reducing. So much so that a week ago I resumed my thrice-weekly early morning walks with my friend Sheila, along part of the Salt Lake trail.

The Salt Lake is entirely dried up this year: 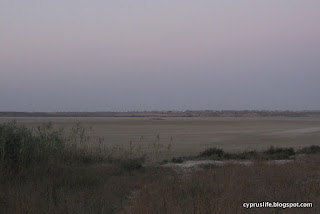 My break in the UK resulted in a great deal more energy than I had before I left, so, combined with the not-quite-so-hot weather, I've been doing more in the kitchen again. I have been using our latest Lakeland acquisition, a three-pot slow-cooker, so much more useful than the one large one which we were using (and which I still have, and will no doubt put into use again when cooking for large numbers).

I still haven't quite adjusted to cooking for just two of us, and last Sunday put together a casserole that wouldn't fit into just one of the pots, but it simmered nicely in two of them. A few days earlier I stewed a couple of large and rather soft apples, which was much easier than doing them in a pan that might boil dry. 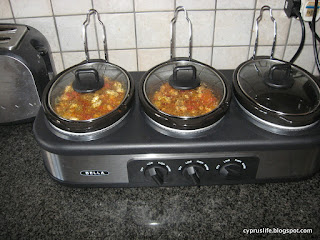 I expect to use this more as Autumn progresses, so I can make two different curries or soups at the same time, either for entertaining, or for us with plenty to freeze for future meals.

We had the first real rain this week, during Tuesday night. It hasn't made any noticeable difference to the Salt Lake itself, but the overall temperatures feel much more pleasant. It was almost chilly this morning when Sheila and I set out on our walk, and watched the sun rise behind some of the palm trees: 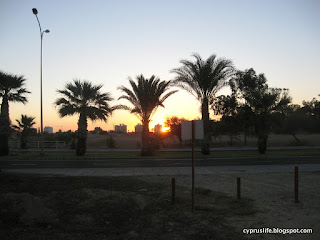 We wondered whether the new looking greenery in the park could have resulted so quickly from the first rain. 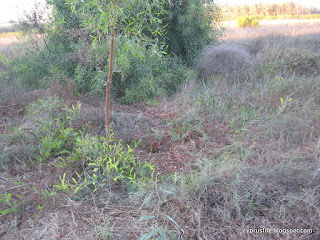 I was pleased to note that in the coming week temperatures are set to be between 28 and 30 degrees C at the most, which is very encouraging after being 30-33 in the past couple of weeks. Today I only used my study air conditioning for a couple of hours; the rest of the time the ceiling fan was sufficient.
Posted by Sue at 20:53