As my young friend Helen pointed out to me this morning, it's exactly two months until Christmas. Even after nineteen years in Cyprus, I can't get my head around the thought of the approaching season while the daytime temperatures are still in the upper twenties.

However, it seemed an appropriate date to write about a small knitting project which has been ongoing for the past six months, and in my mind for a great deal longer.

I used to knit regularly when I was younger. Among other things I knitted several soft toys for the boys, a long scarf and - peak of my achievements - a cable-knit sweater for Richard, back in the early 1990s.  But the boys grew out of soft toys, and I did less and less knitting as other activities took its place. From time to time I thought about it; but the last thing I made, some years ago, was a small chicken that I gave to Helen's sister when she was born, a little over six years ago.

I had brought my knitting needles and yarn to Cyprus, but had a hard time finding any stuffing, until I needed it for the chicken, and had to buy a huge bag: 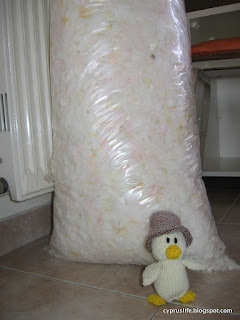 I thought that would motivate me to do more knitting, but it didn't. I started a cat, but got bored. I started a seasonal mouse, and got bored of that too. The pieces lay muddled up with my box of random yarns, and my knitting needles were idle.

In January this year, a friend on Facebook posted a link to an article giving the health benefits of knitting. Around the same time, I spotted on Amazon a booklet by Jean Greenhowe (the author who produced the booklet of knitting instructions for soft toys) featuring a knitted nativity scene. I had seen something similar at another friend's house many years ago and liked it very much. Our nativity figures are rather stylised - we were given them by people moving from the island - but I'd never found any affordable ones that I liked better.

So the Christmas knitting booklet went on my wishlist, and I was given it for my birthday, back in April. I hoped it might be - I would have ordered it myself, otherwise - and when I was in the UK earlier in the month I bought some very nice knitting yarn, a ten-pack of unusual colours that included some browns and greens; ideal, I thought, for my potential project.

One more thing to sort before getting started: I wanted a little drawer unit in which to store my knitting supplies, rather than keeping it in a box in a cupboard. I found exactly what I needed for around ten euros at the local thrift shop, and Alex gave it his stamp of approval: 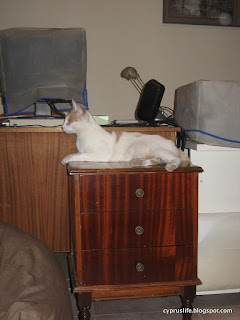 I had already decided that, rather than knitting the people with light pink/beige skin, as in the instructions, I would make their faces olive or light brown, as is much more appropriate for people from the Middle East and Asian areas. So I visited a very nice little craft shop not far from where we live, and bought some suitable shades of brown too.

All the yarn, including the oddments from previous projects, fitted in one of the drawers nicely: 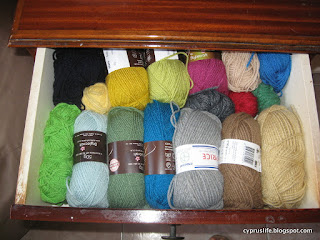 By then, it was the middle of May. I decided that if I knitted for half an hour each day, I might complete one figure per fortnight, meaning that I could finish all ten figures by about the middle of October.

I decided to start with one of the magi/kings/wise men. I opted for the 'green' one, since I had plenty of suitable colours. I followed instructions carefully, and was a little puzzled at the requirement to 'block' the outer cape, which seemed to require rather drastic acupuncture for the poor man overnight, after dampening it and turning it inside out: 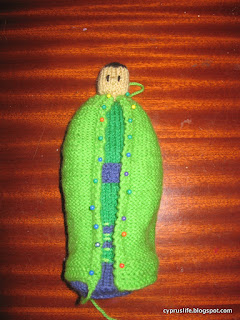 I do trust Jean Greenhowe's instructions although there were times when I had no idea how something was going to work out. I am not at all good at thinking in three dimensions. Knitting the wise man's gift, I wondered if I'd done something wrong when I ended up with this: 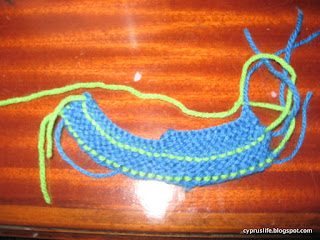 However, I kept following the directions, and it turned into this: 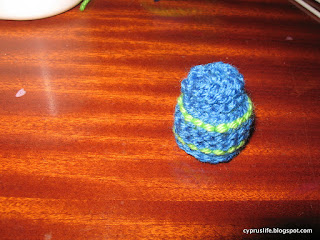 At last everything was complete, just before the end of May. The sewing process is my least favourite part, but I was quite pleased with the result: 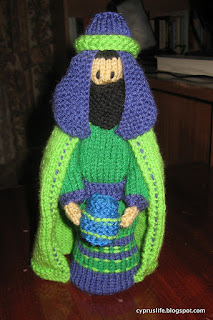 Next I decided to try Joseph. The main body was the same, with some variations, although I didn't think he looked as impressive as the wise man. Perhaps that's appropriate, since he was an ordinary carpenter: 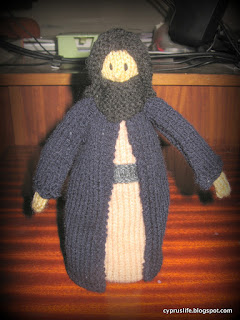 However, I finished him in just a week. Without the fiddly gift and headpiece, and with more confidence in the instructions (and no having to hunt for suitable pins...) it was considerably quicker.

Then I did a shepherd, and that took less than a week, though wrapping yarn around a bendy straw as the final touch was rather fiddly: 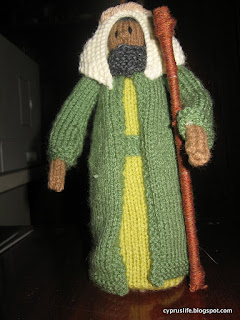 After three human figures, I decided to try something else. The manger wasn't a difficult pattern, but was remarkably difficult to knit as it required double thickness of yarn, which, on 3mm needles, took a great deal of effort. 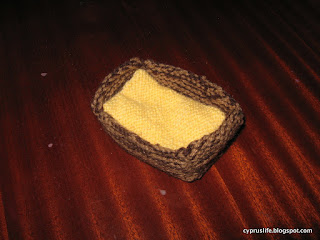 Mary was a bit more complicated than the men too, as she is in a permanent sitting-down position. Moreover, as there's no beard she needed a mouth; I found it impossible to get that to look right, but hope that won't show too much when the whole scene is in place.

I put off knitting baby Jesus, for a while, wondering if this fell into the category of making graven images... however I could hardly have a nativity scene without him, so I continued, and was pleased that he is able to be taken out of the manger and held in Mary's arms: 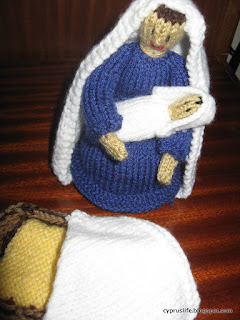 I had realised that the cream yarn which I used for the shepherd's headdress was thicker than double knitting, and I didn't want to use it for the lambs. I also realised that I didn't have bright enough colours for the other wise men.

But I learned that the Zako shop on the main road nearby sells knitting yarn, so we went there and I bought yet more supplies: 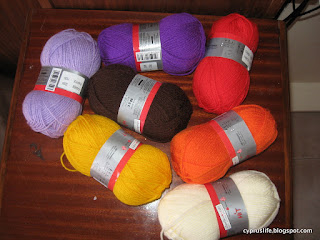 By this stage, it was the end of June and I was way ahead of my provisional schedule. I was also feeling a lot more confident about how the figures worked, so I decided that, rather than having all the standing figures the exact same height, I would make my next wise man a bit shorter. That meant he was quicker to knit, too; here he is next to the first one: 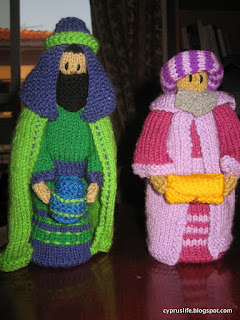 Next I embarked on a lamb. I wasn't too sure about the eventual result, which included quite a bit of fiddly sewing: 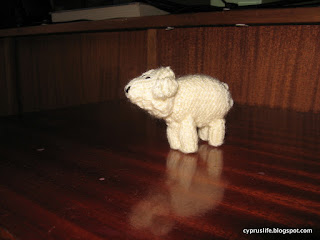 But when placed next to the shepherd, the effect isn't too bad: 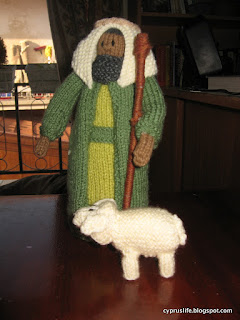 I did the third king mainly in yellow; I enjoyed making the wise men the most: 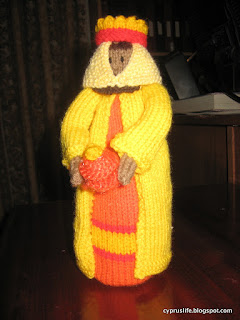 I know that there may have been more than three of the wise men; but there were three gifts mentioned in the Biblical accounts and there are three patterns, so I decided to stick with the traditional three.

I wanted one more shepherd, and thought I'd make him shorter than the first one too, as I was pleased with the effect of the shorter wise man.  I think perhaps I overdid it (or under-did it...) as he looks a bit too short; but never mind: 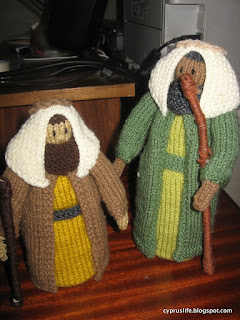 It was early August by now, and I'd completed almost everything well ahead of schedule. So I started a second lamb, but having knitted all the pieces, I realised there was no hurry to sew them together. And I started playing around with some of the tree decorations in the same booklet.

I also realised that I was lacking another important animal: the donkey that carried Mary and Joseph to Bethlehem. A brief search online revealed that Jean Greenhowe had been asked repeatedly for a donkey, and had included one in a different Christmas knitting pattern book. No longer in print, it could be found very inexpensively from the Amazon Marketplace.

I had arranged to spend three weeks in the UK in late August, so I ordered the booklet, and was delighted to receive it in 'as new' condition. But the donkey instructions looked remarkably complicated. I didn't start knitting that until nearly the end of September, and it was, indeed, a more complex set of instructions than any of the others.

I played around with starting to knit a couple of other things. Then, after discussion with my small friends, I began knitting a doll from yet another Jean Greenhowe book.

I realised, about a week ago, that my knitting drawers had become very muddled. So I took everything out, and sorted the different pieces from different items, and put them in bags so that I could see what I had: 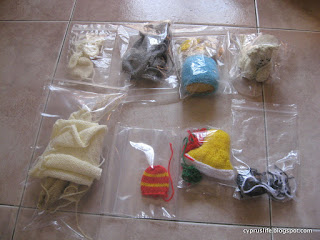 I set myself a target of finishing the donkey by Sunday.  Once again the sewing part was the most fiddly; the legs involved sections of straws as well as stuffing, to keep them sturdy, and the mane was very strange. But I was pleased with the result: 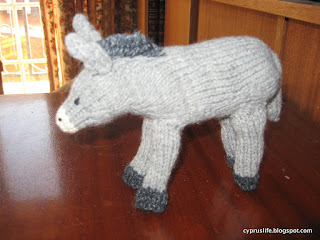 I also completed the second lamb. I haven't put everything out together to make the Nativity tableau, so that will happen mid-December, or whenever we decide to put up Christmas decorations.