When we lived in the UK, seasons were inevitably based on dates. We might argue whether Autumn started on the first or the 21st of September; we might comment that it was really quite warm and summery for September. But we were pretty clear: December to February were winter, March to May were Spring, June to August were Summer - even if it rained most of the time, as happened some years - and September to November were Autumn.

In Cyprus, seasons are a lot more predictable in one sense; during July and August it will be hot (over thirty degrees celcius) during the daytime, and probably humid too. However, the seasonal changes can happen at varying times. Some years we have some rain by early October, and it feels pleasantly cool after the summer, even if visitors tell us it's far too hot. Sometimes Summer starts in May, sometimes not until the end of June. Spring and Autumn can be tricky to spot sometimes, if we believe that it's Summer when we're comfortable spending all day in shorts and tee shirts.

So after many years I came up with my own indicators: Summer is when we have to use air conditioning for the computers during the day, and for at least an hour at night to enable us to sleep, but we can guarantee hot water any time we want it due to the solar heating panels on the roof. Winter is when we have to use the electric water heater regularly and usually have the central heating switched on morning and evening. Spring and Autumn are the in-between times, when we use neither the air conditioning nor the central heating, and rarely need the electric water heater.

This year, I was in the UK for the first ten days of September, and when I got back to Cyprus we didn't use the air conditioning much, if at all. By mid-September the humidity had dropped - mostly - and the daytime temperatures were no more than 30C. Autumn, I decided, was here. It advanced very slowly: it wasn't until early October that I started using a duvet cover rather than just a sheet on the bed, and the middle of October before we decided that the nights were cool enough to warrant the thin duvet. But we were still using the ceiling fan all night.

There was a bit of rain in September, and perhaps half an hour of rain in October, but by the end of the month reports said that the reservoirs were at 20% of capacity. Not as bad as it was eight or nine years ago, but not good. The Salt Lake doesn't dry out every year, but this year it was dry for most of the Summer, and right up to the end of October.

The days were getting shorter, even before the clock change, and I did put on a very light jacket a couple of times for my early morning walks by the Salt Lake; but whereas, some years, I took my camera every time to capture a variety of sunrises, I only did so once in October towards the end of the month when I spotted clouds in the sky, and was quite pleased with this: 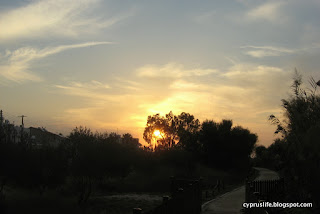 I keep an eye on the weather forecast, and had noted that thundery rain was due in the early hours of this morning, so I'd taken in dry laundry, and hoped I might not have to water the plants.

Apparently there was a major thunderstorm around 3.00am. Family members and friends woke, although I slept right through it. However I was awakened at 4.00am by Richard's phone, which reported a problem at his friend's shop at the marina. Most likely a false alarm, we knew, perhaps due to the winds. I was on the point of falling straight asleep again when Richard, who had decided to get up for a moment, said that there was water all over the bedroom floor.

My first thought was that the roof had been leaking, but we quickly realised that it was water flooding in from our outside balcony. It was evidently a LOT of rain, and something must have blocked the overflow. That had happened once or twice before, although never with enough rain to flood into the house.

I tried to take a photo of the water on the floor - at least a couple of centimetres of it - but it's not obvious at all, although this one does show the reflections in the water: 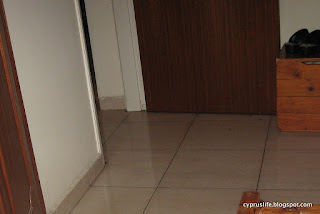 There was water on the landing, too, and in the bathroom, and the study, and the other bedroom....

Richard went to fetch one of the drain unblocking tools, then, splashing through the water on the balcony in his crocs, discovered that rather than being full of gunk, the overflow had been blocked by this: 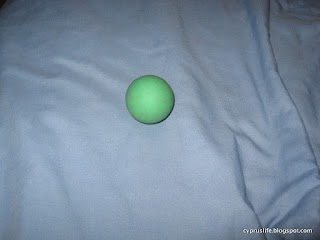 Yes, a cat toy. Most of them are table tennis balls that float, but this one is heavier, and clearly didn't.

We knew we had to get the water out, before it damaged the wood of the bed, and the chest of drawers, and the bookcases. So Richard fetched our Bissell Green Cleaning Machine: 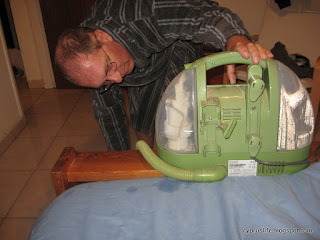 And an old-fashioned mop and bucket. 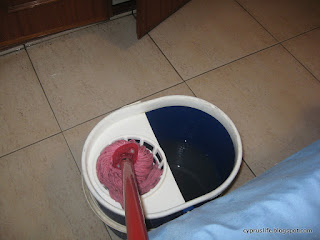 This Bissell machine, much smaller than our old one, only sucks up about a litre of water at a time, but it does so quite quickly and could easily be emptied into the bucket.  I used the mop to push some of the water towards the balcony, and more into the bucket. Richard must have emptied the bucket at least twenty times in the next hour, and gradually the water levels went down.

We then got rid of most of the water from the other rooms, and by then it was about 5.54 am and getting light. He went back to sleep for an hour, and I decided I might as well go for my planned early walk with Sheila, although we thought the trail might well be impassable. I decided to wear long trousers rather than shorts, and was glad I did.

On the way to the Salt Lake trail I saw fields full of water: 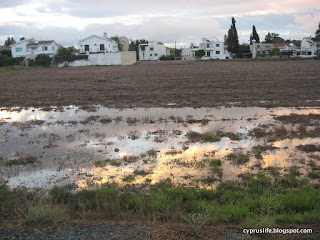 We were amazed to see that just one major downpour was sufficient to make the dried-out lake look almost full: 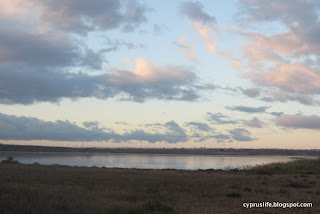 We walked perhaps 500 metres towards the Airport Road, and then saw this, with water flowing across the path: 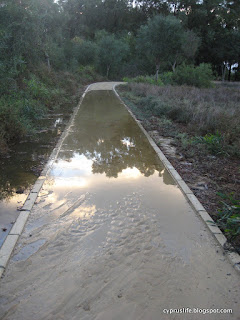 So we turned back and headed the other way.  The light was stunning over the outskirts of the town, although - as ever - a photo can only give a slight hint of how it looked: 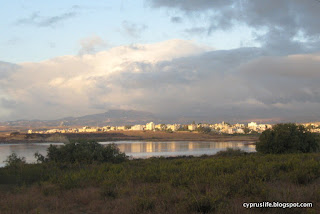 We walked perhaps a kilometre and a half of the trail before coming to this: 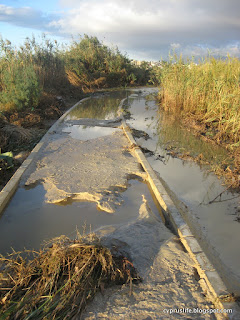 I was very tired by this point, so we headed back.

I didn't need the water heater for my shower this morning, as the sun was out by this time, and I waited until after nine o'clock. But I did decide to put on jeans rather than shorts, and I'm pretty sure Richard will need the water heater for his shower this evening. With the time change and increasingly shorter days, this will be the pattern for the next two or three months.

So, even though the daytime temperatures are predicted to be around 24-25 degrees next week, and we haven't yet had our central heating serviced so it won't be going on just yet... I'm unofficially declaring that, this year, winter in Larnaka started today.
Posted by Sue at 17:45