Visiting a taverna at Zygi

It had been a busy few weeks, but at last we had bought a comfortable and - we hope - reliable car. Richard wanted to take it on a slightly longer journey than just doing errands around Larnaka, and since we had not been on a 'date' for a long time, suggested we have lunch at the fishing village of Zygi.

My knowledge of Cyprus geography is extremely limited, and I vaguely assumed it was about ten or fifteen kilometres away, so was a bit surprised when it took us nearly half an hour to get there - it was, according to the signposts, nearly 40km away. Still, the journey was very comfortable and smooth; Cyprus roads are really very bumpy, particularly around town, but this Megane seems to smooth them out better than any other car we've previously had. 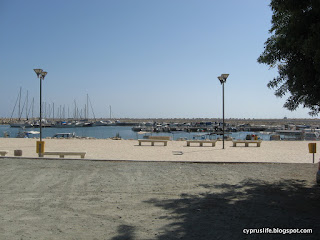 Richard had heard good things about the main restaurant looking out over Zygi marina, and it was easy enough to spot from the car park. A covered area had lots of tables and chairs, and there were several people eating. There was a big menu on the way in so we paused to take a look.

Just as well that we did. The theme - unsurprisingly, perhaps - was sea-food.  While Richard does quite like shellfish, I can't bear any of them.  Even looking at them makes me queasy. And the prices looked extremely high. So we glanced down... there was a section of the menu that said it was for people who wanted something different, but that was all steaks, at even higher prices. All we wanted was a light lunch... but there were no sandwiches, no baked potatoes with fillings. There was a pasta selection, but it was all related to sea-food.

I expect the food is excellent quality for people who like sea-food, want a large meal, and don't mind paying high prices. But I could not find a single thing on the menu that I could have eaten.

So we decided to walk into the village itself. We rejected one or two rather scruffy looking places, and then we spotted this: 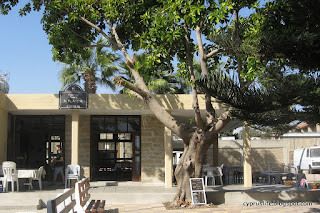 'The Plateia' looked like a pleasant little taverna. There was building work going on at the side: 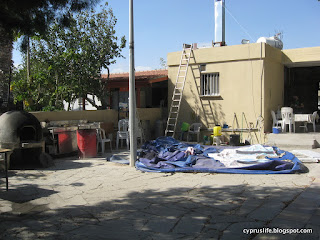 But it was open, and when we sat down we were brought a menu almost at once. It was exactly what we were looking for: sandwiches, filled pittas, or platters, at very reasonable cost.  We decided on the platters, after being told that they came with both chips and salad.

Richard chose sheftalia, a kind of Cyprus sausage, and I chose halloumi.  It wasn't particularly quick, but that didn't matter; evidently it was freshly cooked, and when it came was nicely presented and delicious: 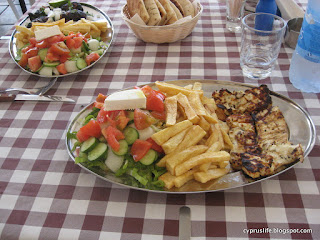 They brought us a bowl of pitta bread too, but we didn't want extra carbs so we didn't have them, although I'm sure they would have been good too.

We were there for about an hour, and nobody else came to eat there, but it didn't matter. The place was secluded and quiet, and while we couldn't look over the sea, there was greenery and fresh air and sunshine, and our table was pleasantly sheltered.