Meze at Kura Giorgina in Larnaka

A few weeks ago, some friends stayed in our guest flat, and, during the course of the week, offered to take us out for a meal. When they were here a year ago they took us to a meze at a taverna called Kura Georgina. It's in William Weir Street, about a kilometre away from where we live, so easy walking distance. We all liked it, and they suggested going there again.

We had booked a table, although it wasn't necessary when arriving at 6.30, as we tend to do. Cypriots often eat much later, arriving at restaurants at perhaps 8.00 or even 9.00pm. But my metabolism doesn't do well with late eating, and we much prefer to be in an uncrowded environment, free from smoke. Cypriot restaurants are now smoke-free indoors, but there's still usually smoking outside making it unpleasant to go in and out.

Kura Giorgina's is a traditional building with a bar near the entrance, and tables laid out in typical Cyprus style: 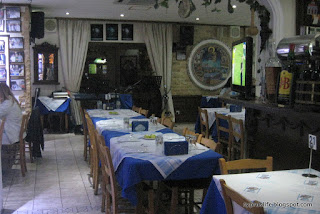 Since there were five of us - our younger son was visiting too - we ordered a meze for four. There's always so much food that it's normal to ask for fewer portions than the number of people, unless everyone has a huge appetite. We debated ordering for just three, and in retrospect that would have been plenty.

Two of us drank water, but the other three ordered a bottle of wine. It came in an unusual traditional bottle, and was poured into pottery cups, which were quite attractive: 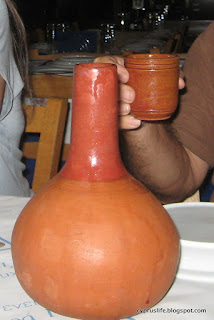 The 'first course' of a meze, if one thinks of it that way, is usually a Greek salad, complete with feta cheese, bread of some kind, and dips.  That's exactly what arrived on our table within a few minutes of our order: 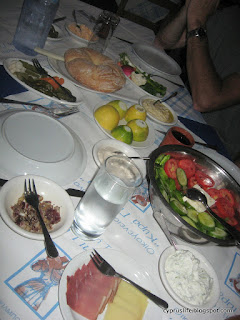 Unusually the bread was neither pittas nor village bread, but a warm, apparently freshly baked bread that was very good. There were also some slices of processed meat and cheese, and some capers. I had a lot of salad, some bread, tahini dip, tsatsiki, and a pepper/yogurt dip which was delicious. It's all too easy to eat a lot of the starter, when one is the most hungry, and feel almost full by the end but I know from experience that this is a bad idea.

It wasn't long before other dishes started to arrive. There were plates of meat of varying kinds, baked eggs, a plate of freshly cooked chips, and - my favourite of all - some deep-fried aubergine slices with Greek yogurt.  I had a lot of those! 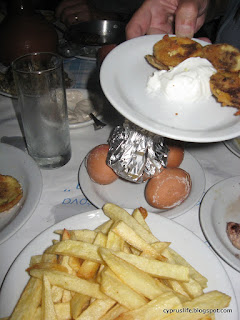 There was a great deal more which I forgot to photograph: halloumi, other vegetables, scrambled eggs with courgettes, olives, and much more. Each dish arrived just as we were wondering if we had come to the end. And, as so often, there was a large dish of different kinds of fried meat near the end. 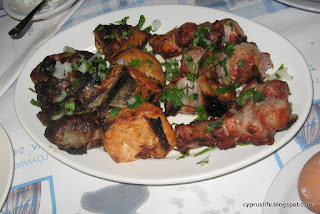 We were told that this was the end, which was fine since we were all quite full. I eat almost no meat but I had a small piece of chicken, and it was very good. The rest of the party managed to finish most of what remained.

We chatted a while, and nibbled at bits and pieces, and then, after the waitress cleared away most of the dishes, it was time for dessert. This is often included as part of a meze, but we were still pleasantly surprised and very impressed with what they brought.

There was a selection of fresh fruit, clearly only just prepared, and some candied fruit which was a bit too sweet for me, but which the others liked: 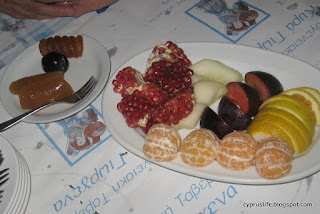 And then, when we thought we couldn't manage another bite, they brought out loukoumades: 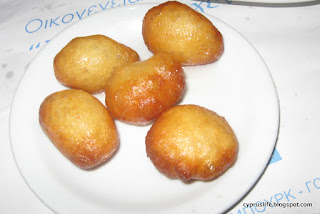 These are a sort of deep-fried doughnut batter with honey; probably very unhealthy, but rather scrumptious. And despite our order being for four people, they brought five loukoumades... so we decided we should each have one....

We were probably there for a couple of hours, and could see that the area outside was getting quite full. People started arriving to eat inside, too, but we thought it was about time to leave. We could have had coffee if we'd wanted to, but that would have kept us awake all night.

Here's what the front looks like after dark since I forgot to take a photo on the way in: 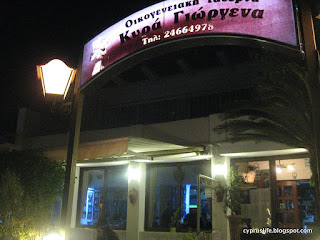 All in all, we thought it an excellent meal.  While some mezes can be very meat-focused, we liked the wide range of non-meat options at this one, and the friendly family atmosphere.
Posted by Sue at 18:01