A Cold and Frosty Cyprus

I know. It happens every year. Just as we think that Spring might be around the corner, as the days get longer... wham! We're in the middle of such a cold spell that it's almost impossible to stay warm.

December was bad enough; for most of the time Tim was here, hoping for a bit of sunshine, it rained or was grey and rather miserable. But although chilly, it wasn't bitterly cold.  Perhaps ten or twelve degrees, but the cloud cover meant that it didn't get much cooler at night. And our house isn't too badly insulated, at least compared to the majority of Cyprus homes.

Since we returned from our UK trip, it's been quite sunny, around 15 degrees in the daytime. Not too bad at all, I thought. We've been running our central heating for a couple of hours morning and evening, and the house has mostly stayed reasonably warm.

On Tuesday I could see quite a few clouds so took my camera when I went for my morning walk with Sheila. The flamingoes were in evidence, but I didn't want to get any closer to the Salt Lake, and my camera doesn't have much of a zoom... but for anyone interested, those little dots are hundreds of flamingoes; clicking the small photo should take you to a larger version: 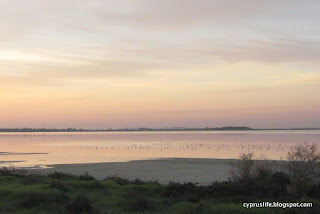 And yes, there was a pretty sunrise too, if a little spoiled by the overhead cables.... 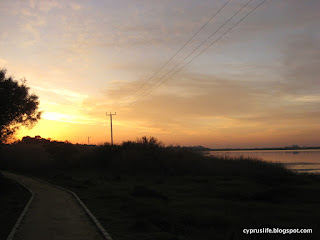 But this weekend was predicted by the local paper to be the coldest in a long time. As it was due to be around 2-3 degrees this morning, I wore a very warm jacket and gloves when I went out for my walk with Sheila.  That on top of two other warm layers. I did shed the gloves after about three kilometres of fairly fast walking, but put them on again before I got home.

The cats are spending a lot of time either racing around the house looking for things to knock over... 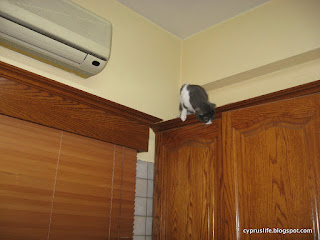 ...or huddled up near radiators. 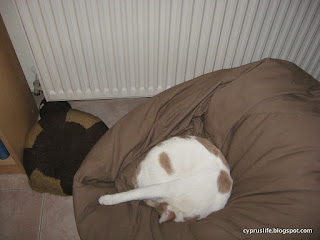 Jane doesn't go out at all, other than on our balcony, but Alex has always liked running around the rooftops nearby, so we let him out when he asks in the daytime. Today he's been out briefly perhaps three times, quickly returning through the incoming-only cat flap. At lunch-time I opened it for him and a blast of cold air came through. He turned and looked at me with a shocked expression. Surely I couldn't expect him to go out in THAT...?!

This morning I stayed somewhat active and warmish in the kitchen. The oven was on as I made my next month's granola, and I also needed to process 5kg tomatoes that I bought (for a euro) yesterday at the local fruit/veg stall. I made around 800ml tomato ketchup: 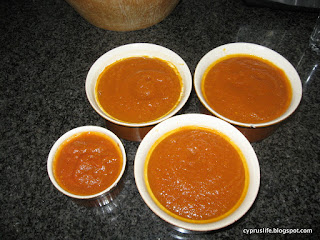 I stewed another couple of kilograms gently, then froze in four portions to use in place of canned tomatoes in future.  And I also decided to dehydrate another kilogram and a half, to give me dried tomatoes to use in one of our favourite bread recipes. 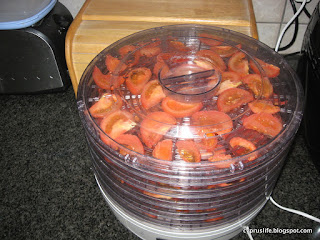 The dehydrator gives out a lot of hot air. While it's not exactly an efficient way to heat the kitchen, it's a great by-product at this time of year.

Even so, I gave the central heating an extra hour boost twice during the daytime, something I almost never do. Just as well it's only infrequently this cold.

Here's what the hourly weather forecast showed when I checked it just a few minutes ago: 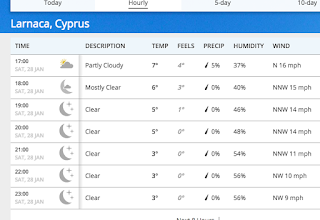 Still, I really don't mind the cold weather nearly as much as I dislike the heat and humidity of Cyprus in Summer.