Ordinary days in an ordinary life in Cyprus...

I'm sometimes asked what I 'do' with my time, since I don't go out to work and no longer have children at home. I never know quite how to respond. I'm not a 'career' person; I've never had much ambition beyond a reasonably comfortable home and family life. I loved being a full-time mother of small children, and also thoroughly enjoyed home educating our sons as teenagers.

I dreaded the 'empty nest', but, over eight years later, I'm mostly contented with life as it happens. As I was trying to think about what to say in this post - at the end of a week where nothing much has happened, yet I feel that it's been quite busy - I saw this link on Facebook: What if all I want is a mediocre life?  I don't much like the word 'mediocre', but that's how some more driven or ambitious people see those of us who are contented to live life a day at a time, doing what needs to be done, offering ideas or sympathies or just a listening ear as required by those around us.  A 'small, slow, simple life', as the writer of that article puts it.

I'm a strong Introvert (INFJ, for those who know and/or care about such things) and need quite significant time alone regularly. I'm also the kind of person who needs an approximate structure to the week, if I'm to get anything done, and a list of tasks to cross off as they are complete. I tend to think in terms of 'projects', and if I have one, I throw myself into it. So far, my favourite is being a hands-on grandma, but that can only happen when I'm in the same country as my grandchildren. Last year, I did a knitting project to create a Nativity scene, as mentioned elsewhere; then in December I spent many hours sorting, uploading and arranging all my 2016 photos to create a year's 'Photobook' to be printed.

I call myself a writer, since people seem to want some kind of label, and I've always loved writing. I have many potential writing projects in differing stages of completion, but in recent years have not felt much inspiration. I run a few websites but haven't felt much inclination to update those, either, unless specifically asked to add something. I update my books and DVD review blogs regularly, and am attempting to write on this one at least once a week, but have mostly neglected my other blogs. Since I aim to read and review at least 100 books each year, I read for perhaps an hour (in total) each day.

I have an ongoing project which I wrote about a year ago, to scan our entire collection of negatives. I think I'm about half-way through. I answer questions on online forums, sporadically, and I'm also using both the Memrise and DuoLingo sites to attempt to revise my schoolgirl French and learn more Greek.  I do some knitting each day... and I do our household cleaning, laundry and cooking, as well as weekly bookkeeping (on the computer) to keep track of all our income and expenditure.

My typical day starts between 6.00 and 6.30am. At this time of year I have no wish to get out of the warm bed after a chilly night, but at some point the bathroom calls, so I throw on my walking trousers and yesterday's shirt as quickly as possible...

Alexander the Great and Lady Jane Grey are always pleased to see me when I let them out of the kitchen/dining room area where they sleep at night. They don't snuggle together much, but sometimes we see this: 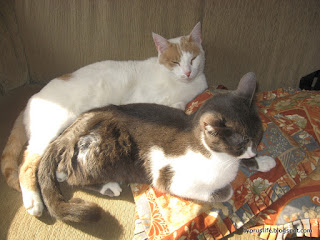 By the time I've walked for an hour with Sheila (three times a week), read for a while, chatted to God, thought about the day, cleaned the house (main floor on Mondays, upstairs on Wednesdays), squeezed orange juice and had breakfast, visited the local froutaria [greengrocer] for more fruit and veg (three times a week), taken my shower and put on clean clothes, it's usually about 9.00 or 9.30 - sometimes later - and I'm ready to sit down at my computer: 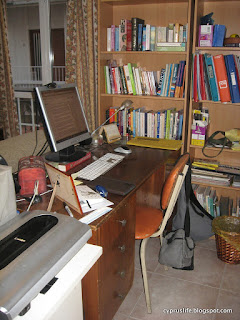 Not that I do so at 9.30 every day. On Sundays I try and avoid switching it on at all, and once a month on Mondays I go to the Larnaka Christian Writing group. On other Mondays - or perhaps Fridays - Richard and I do a supermarket shop, or catch up with paperwork, or household repairs or maintenance. On Tuesday mornings Sheila comes over with her three younger daughters, and on Thursday mornings the three girls are here while Sheila teaches English to adults.

We eat a cold lunch most days, with home-made bread, and salad vegetables, perhaps some leftovers from a previous night's evening meal, or hummus, or dairy-free cheese and chutney, or sometimes home-made soup if it's really cold.  It's fairly leisurely and a good break in the middle of the day.

In the afternoons I usually have three or four hours at my computer before I need to start meal preparation. I don't sit there solidly; I have an application that tells me to take a ten-minute break every hour, and that's when I might hang out laundry, or potter in the kitchen, or do some knitting, or sit and read.

I cook almost everything from scratch, but when I make hot meals it tends to be enough for at least four people, sometimes eight, so unless we're entertaining there's usually plenty to freeze.  I follow - roughly - a four-week menu plan that means I don't have to think about what we're eating each evening. If I'm making a new batch of granola, or ketchup, or chutney, I tend to do that at the weekend. And yes, just like the writer of the article I quoted, I believe strongly in real food and budgeting and planning, but sometimes break my own 'rules'.

We eat around 6.30 - 7.00pm most evenings. One evening per week we eat at our friends' house, and one evening per week they usually come over, after eating, to play a board game with us. Richard and I like to watch a film on DVD once a week, and occasionally we have someone over for an evening meal. But friends and acquaintances keep leaving the island, and that's not something we've done for a while.

Other evenings I might read, or we might play a two-person board game, or we might have a video call with one of our sons in the UK... or we might sit at our separate computers and continue what we were doing in the daytime.

When we were planning to move here, around twenty years ago, friends commented that it was exciting, and that they could never uproot, and how brave I was to embark on such an adventure. I didn't feel brave; I didn't want to leave my comfortable UK life behind. But my family mattered more, so we moved to Cyprus, and adapted, and adjusted, and I'm contented - mostly - even if my life seems dull or 'mediocre' to others.
Posted by Sue at 20:03

I don't think your life sounds dull at all! I love hearing about the things going on & your life. You communicate well in writing and really do give a picture of your life.