Family visits (not in Cyprus)

Ten days ago, we flew from Larnaka to Gatwick. Winter is not a time when we normally choose to be in the UK, but events came together this year in a way that really gave us little choice. I wrote in an earlier post about our new granddaughter, born a couple of weeks early in Carlisle (and now in excellent health). Naturally we wanted to meet her as soon as possible.

I had also mentioned back in September that our younger son Tim is now living and working in Surrey. At the time he had a temporary job and was living in temporary accommodation. So a great deal of his stuff (particularly books and kitchen equipment) was stored in Cyprus. In November he was offered a permanent post, and was then in a position to look for a flat to rent longer term. He found somewhere and took possession in the middle of December, but since he was spending Christmas with us in Cyprus, the only things he had bought for the flat so far were a bed, bedding, and some crockery.

After Christmas, Tim prioritised his stored stuff, and we booked two 20kg suitcases for each of us (yes, that's 120kg of checked luggage!) on our flight, and Richard - who is excellent at packing - worked out what would go where. 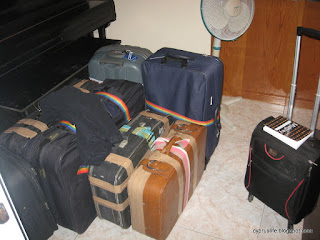 We needed two cars to get to the airport, and happily two of our friends were willing to drive us there. Checking in was no problem, the flight was on time, and all the luggage arrived safely. Since we got to Gatwick after 11pm we had booked overnight at the Travelodge which, as usual, offered good value and a large breakfast.

In the morning, Richard and Tim went to pick up the rental car we had booked. They were expecting to pick up a VW Golf. Tim was then planning to get the train from Gatwick to his new place, while we hoped to fit the luggage in the car in full estated form.

However, the only Golf available was 500 miles away from needing a service, so they were offered a free double upgrade. It's a car which Richard likes very much, and which easily took all the luggage, plus the three of us: 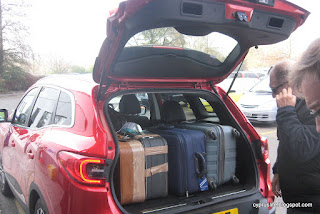 Our first view of Tim's flat was a bit mixed.  The living room area was bare and empty, the second bedroom filled entirely with packing material from Tim's purchases so far - but no furniture at all. However, we very much liked the kitchen. It's quite compact, but fully equipped with oven, hob, a large fridge-freezer, and even a dishwasher. 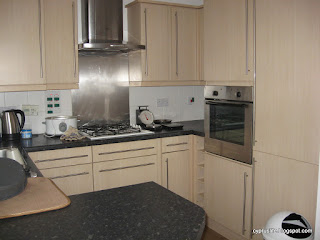 After we had brought the cases in, my job was to sort and tidy rubbish and packaging material, and unpack suitcases (other than the two containing books) while Richard and Tim went to collect a transit van, rented for the day, and then to drive around collecting various second-hand furniture that Tim had ordered through 'GumTree', a classified site that, in Surrey, seems to have a great deal of inexpensive and high quality items.

By the end of the day,Tim had acquired a sofa bed for us to sleep in, an office table and chair plus a computer monitor, an Ikea sofa (in pieces, still) a dining table and chairs, bedside cabinets, and - his favourite purchase - a gliding chair, all for a fraction of their worth. Thankfully, although it was very cold outside, it was not raining.

On the following day, which was cold and frosty, they returned the rental van and then we drove in the large car to Newbury, where my brother and sister-in-law were hosting my family's annual post-Christmas gathering. It's the first one Richard and I have been to since the tradition started about twelve years ago. Fourteen of us sat down to an excellent lunch, followed by present-opening. 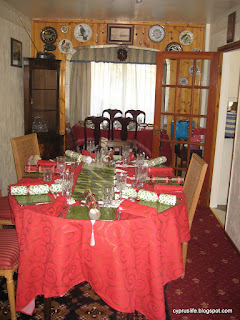 Yet more of Tim's stuff had been stored in my father's garage in Alcester, and that had been transferred to Newbury, so we collected a couple of boxes of kitchen and computer bits and pieces, and his bass guitar. We drove back through freezing fog, which was not pleasant: a cultural experience that we have never had in Cyprus.

On the Friday we spent the day with Richard's mother in Sussex, with lunch at a garden centre; then we managed to find some winter jackets, reduced by 70% or more. I'd been wanting a new waterproof winter jacket for a long time as my previous one was over thirty years old and rather falling to pieces.

On Saturday Richard and Tim put his sofa together, and he bought some more important items: a biggish bookcase, a digital piano, and even a picture for his wall. His living room was starting to look quite cosy by the end of the day: 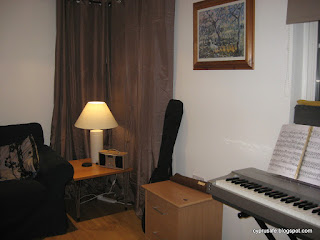 On Sunday - New Year's Day, though it felt like weeks since Christmas! - we visited Tim's church, which was friendly and welcoming, then had a rather worrying phone call from our friend Sheila who is cat-sitting for us while we're away. Cleo, who is now about eighteen-and-a-half, had been getting confused, wandering around in circles, and got herself into a tight spot where she had to be rescued after some furniture moving.

I happened to take a picture of Cleo shortly before we flew out; she was getting frail, and thinner than she used to be, but her coat was still reasonably clean, her eyes bright, and she was eating heartily. As far as we could tell, she was quite happy, and in full possession of her sight, hearing and other senses. She slept a lot, and had some arthritis and a swollen (but not painful) leg... but otherwise was fine. 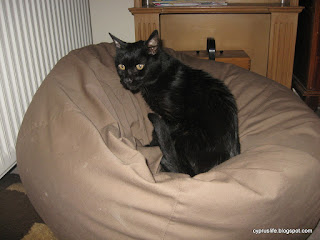 We wondered if she had suffered some kind of stroke.  However, since Sheila assured us that Cleo did not seem to be in any pain or distress, we suggested waiting to see what transpired. There would only be emergency vet services on New Year's Day, and it's not as if a vet could 'cure' such an elderly cat (she's around 112 in human year equivalency). Cleo has rallied before when we thought she was on her last legs...and indeed she was better on the Monday. Worse again on the Tuesday, but then livelier and very friendly to Sheila for the rest of the week... at least, so far. More than one person has suggested that Cleo may be missing us.

Back to our UK trip... we played a board game after lunch before setting off for Alcester, where we admired my father's wooden Santa collection, some of which was on display on the mantelpiece: 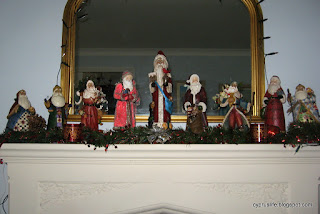 We relaxed there for a couple of days, though my father was plagued with a nasty chest infection and I was suffering from a nasty lingering cough. Then on Wednesday we drove the longer distance up to Carlisle to meet Esther: 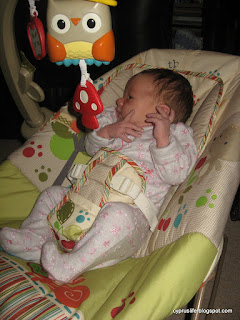 She was four weeks old yesterday, and still sleeps most of the time, though she's quite windy at night which keeps her parents awake rather too much. She's gorgeous, but not yet reacting much to other people. So, inevitably, we're spending more time with David, who, at two-and-a-half, is delightful. He rarely stops talking, and has an amazing imagination as well as an apparently insatiable appetite for books, something we're all happy to encourage: 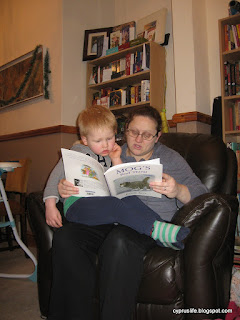 I had a bit of an adventure with him yesterday when I took him out for what I thought would be a fairly quick walk around a few blocks, to give him some fresh air and let him splash in puddles. I didn't take my bag, thinking I wouldn't want my camera, only to realise after he'd led me along several different roads and paths that I had NO idea where we were... and did not have my phone to call for help!

Thankfully he has a much better sense of direction than I do, and although we must have walked for more than a mile he led me back to the end of his street and home in time for lunch.

When he's not being read to, or playing with his diggers, or Duplo, or Postman Pat figures, or doing jigsaws (I was impressed to find that he can do a 12-piece puzzle without any help, and a 16 or 20-piece one with only a few suggestions) he's role playing in some way; here he is, in a cool hat, having clicked on his imaginary seat-belt, and donned his imaginary sunglasses, driving a car: 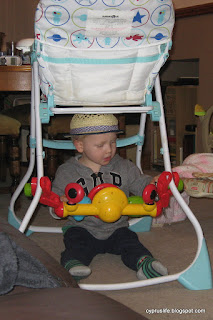 It's going to be harder than ever saying goodbye when we return to Cyprus in another week.
Posted by Sue at 22:56