It feels like several weeks since my last blog post. Travelling can have that effect, as can the collision of two worlds. Normally when we are in the UK, we're focussed on the people and places there, and life in Cyprus takes a back seat. The reverse happens when we return home. It's as if, at some point on the aeroplane, one scenario is faded down, and the other faded up.

But when a crisis occurs, or someone we love is ill, or struggling in some way in the 'other' country, our focus moves to them, and it feels discordant, as if I'm in the wrong place, not entirely sure what I'm supposed to be doing. It was like that in December when our new granddaughter was in hospital in Carlisle, with the threat of a nasty infection. I could hardly concentrate on anything else until we knew that all was well.

Something similar happened last Sunday. I had mentioned that Cleo, our very elderly cat, had become disorientated and confused on New Year's Day. Perhaps, we thought, she had a stroke. But she wasn't in pain, and our friends in Cyprus were looking after her. As the days progressed I thought about her less. Then last Sunday morning, quite unexpectedly while we were at a church service, I had a sense of Cleo slipping away; an image in my mind of her being greeted with some surprise by someone who died a few years ago. I suppose I knew then that we were losing her.

When I opened my computer a couple of hours later, I had two emails from Sheila, our friend who was cat-sitting in Cyprus; the first one let us know that Cleo had stopped eating and, that morning, seemed to have lost the ability to walk. If nothing changed, she and another friend felt they needed to take her to the vet on Monday morning.

The second email, sent an hour or so later, simply said that Cleo had died. It must have happened around the time she came to my mind so strongly.

We felt numb at first, with that sense of being in the wrong place. Then sad, along with a sense of inevitability and rightness. Her time had come, and she slipped away peacefully in her own home. We felt worst about our friends having to see her go downhill so rapidly, and deal with what happened.

Daniel and Becky's close friends came over in the evening for a meal and a Settlers game, and it was good to be distracted, though I had an underlying sense of sadness and disorientation.

I don't remember what happened on most of Monday. I didn't take any photos at all. On Tuesday Richard drove them to have Esther's birth registered in the morning. He spent some time at Daniel's office helping him with some projects, and also sorting out some equipment he had ordered to take back to Cyprus.

On Tuesday evening, Daniel and Becky decided that it was time for David to have his 'main' Christmas present. For a long time they had been talking about getting him some kind of keyboard. They didn't want a 'kiddie' one with poor quality sound, but of course full-sized ones are expensive. They thought they should wait, in any case, until they know where they will be working next.

Then they managed to acquire an old but good quality keyboard that would otherwise be thrown away. Daniel checked that it was working, but didn't want David to have it amidst the excitement of Christmas and other presents. But on Tuesday evening they were starting to take down Christmas decorations, so David was given his 'plano', as he called it. He was thrilled, and quickly figured out how most of the buttons worked: 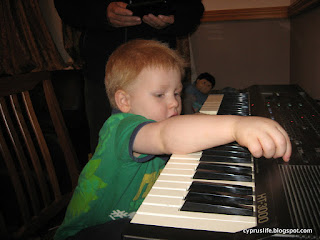 Meanwhile, Esther was growing stronger and more alert each day. Unfortunately being awake in the daytime did not mean that she slept any better at night, but it made a good opportunity for me to start reading some books to her, and she seemed to find the pictures interesting: 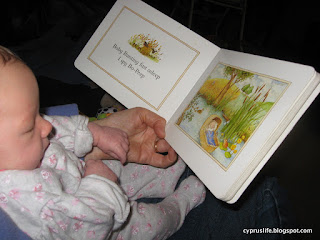 On Thursday we went into town, and Becky could not resist buying an inexpensive set of  four 'Tiger who came to tea' jigsaw puzzles from 'The Works'. David, it seems to me, is remarkably good at jigsaws; I've never before seen a child so young look at the colours and shapes, and deliberately find pieces showing faces or bodies to match one he had found already. He put the 12-piece jigsaw together in a couple of minutes, without any help, and then needed only a few hints to put together the 20-piece puzzle: 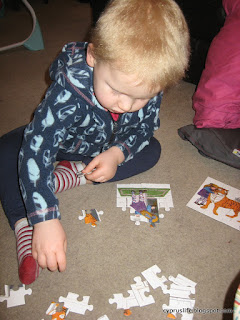 Our time in Carlisle was rapidly drawing to a close. I read large numbers of books, I played with David's Postman Pat figures, I helped him build structures with Duplo. He doesn't in the least mind his different worlds not just colliding but colluding: if Postman Pat has a breakdown, he calls Bob the Builder to help him. Mog the cat fell through the roof of the Duplo house and tried to make friends with Postman Pat's cat Jess. David himself was, by turns, Mr Strong and Mr Happy and Mr Slow.. and sometimes 'just David'.

Every so often he spent another five minutes at his 'plano', content to use a fairly low volume, and mostly very careful. I'm sure all grandparents believe their grandchildren to be uncommonly wonderful - as, indeed, toddlers are pretty much universally. At times he showed that he's still just a small child; he sometimes confuses words, telling us that a 'bandage' is a 'bank', for instance, or asking Becky to put Marmite on his 'Bridget' when he meant 'crumpet'.

I didn't understand what he meant by a 'bock' at first, until I realised that he was using it as the singular of 'box'. When I told him that one of them is a 'box' and two are 'boxes', he muttered, 'books and bookses'.  English is a very confusing language.

At last, it was time to leave. We had to book four pieces of checked luggage; in addition to the modest single case of clothes that we had taken out, we had been given a lot of Christmas presents, and bought some new jackets with Christmas money. We also had rather a lot of equipment which Richard had ordered, which needed flight cases to take them back.

Our flight was at 1pm Saturday from Liverpool. We had decided to drive to Liverpool on Friday evening rather than having to leave early on the Saturday morning; the weather was unpredictable (much of the country had snow, though we didn't see any) and we didn't want the stress of traffic jams or other holdups when we had a flight to catch. So we said our goodbyes and left around 7.15pm, just before David went to bed.

The drive was straightforward and took about two and a half hours; we stayed overnight at the Holiday Inn Express, which is much like a Travelodge but (in our view) somewhat nicer. Our flight was on time and, since we had so much luggage, two friends met us, with two cars, at the airport.

We mostly unpacked last night, feeling sad that there was no Cleo to greet us, but pleased that Alex and Jane seemed so lively and (after pointedly ignoring us for a while) very friendly to us, and each other. 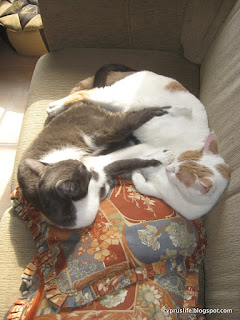 We went to the PO Box this evening. There were 21 Christmas cards waiting for us. Some had been posted as long ago as Dec 12th; yet they had not arrived by the 27th, when we flew out. For some reason, post to Cyprus always seems extremely slow during the second half of December and we usually receive most of our Christmas cards in January.

So, once again, we'll keep them with the Christmas decorations and next December will display them all and think of the recipients as we put them up.

So very sorry to learn of Cleo's passing, and I am not at all surprised that she came into your mind about the time she shed her mortal coil. The news about Esther, and clever David, is most encouraging; it must surely be a real joy to be in their presence. I sometimes wish that I had the trust, simplicity and openness of a child. My God bless them abundantly.