Although we've lived in Cyprus for twenty years now, there are still occasions when we smile, or roll our eyes, and mutter, 'This is Cyprus!' It's a phrase used by Cypriots as well as ex-pats, often with a sense of pride in the way the island functions. Below are three recent examples:

Our main floor and the upstairs have separate pumps in our central heating system. About a year ago, we weren't getting any heat on our main floor. Not such a problem in Cyprus as it would be in, for instance, the UK; but some days are decidedly chilly. Our builder recommended a central heating engineer who came to have a look. He said we needed a new pump, so we asked him to fit one. However, instead of buying a new one, he found one that was being discarded by a school, and fitted that. The heating worked - mostly - for the rest of the winter.

But by the time it got cold again a few weeks ago, it was obvious we needed another replacement. Richard decided we would buy one ourselves, and then just ask a plumber to fit it, rather than risk another poor quality one. We went to a suitable local shop, where we were told that yes, they could sell us the exact same pump as our original one but that they recommended another which worked the same and was half the price. We would have bought the most expensive one if they hadn't been so insistent that their own brand was as good (and guaranteed). It was a positive 'This is Cyprus!' moment.

So we asked the shop if they had a recommended engineer who could fit it; preferably one who speaks English.  Yes, they told us, we should speak to George.  I don't know how many scraps of paper we've seen over the years with a phone number and the name 'George'.  Richard phoned him, and he said he would come later that day, or the following morning.

We waited, but nobody appeared. So Richard called, and he said yes, he would come later in the day.  He didn't.  He had many good reasons for not coming when he said he did, but after about the fifth day we were starting to feel rather frustrated. It was a not so good 'This is Cyprus!' experience that is all too familiar.

However, he did eventually come, fitted the pump efficiently and quickly, and even told us why the gas-powered part of our water heating has never worked.  He looked at a drip on the roof and said that one of our water tanks was faulty.  He then looked at a toilet which was very difficult to flush, and made a quick adjustment.  He was competent, quick (once he got here) and charged us just €30 for his time.

Most of the curtains in our house have pull-cords.  And for about ten years or so, they worked just fine to open them in the morning, and close them at night. 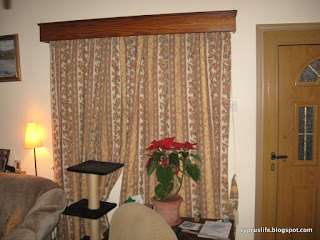 Perhaps it's not obvious from that photo, so here's a close-up of the bit we pull: 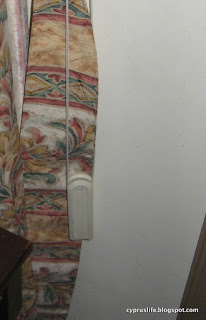 In the past few months, however, first one curtain and then a couple of others started to jam. They wouldn't open - or wouldn't close - using the pull-cord.  We thought perhaps the cord needed to be replaced, as it looked a little frayed in places, so we bought some new cord. But quickly realised, when we took one down to try and replace the cord, that the problem is in fact with the mechanism at the end of the track that guides the cords: 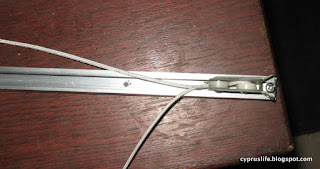 There are two little wheels at each end, in a metal enclosure, and they were stuck. One of them broke off completely. We realised that the pelmets with the curtain rails have probably been here for thirty years or so... and the little wheel mechanism things needed to be replaced.

So Richard took the track off, and we went to a local shop that sells curtains and fittings.  The person on duty shook her head, and said it was a 'very old' fitting, one that could not be replaced. She said we would have to replace the entire metal track with a new fitting, and that each one would cost at least €25.  Since we have ten of them in all, which will need to be replaced eventually, this seemed a bit steep.  Moreover, the new track which the shop assistant showed us was exactly the same size as the one we have already. "Couldn't we buy just the new mechanism and fit it in the track?" we asked.  No, they insisted, it was too old.

Another oddity of Cyprus is that similar shops tend to congregate in the same area. So we thanked the shop assistant, and went to the next curtain shop, a couple of doors down the same street. We asked the same question.  They, too, said that our mechanisms were too old to be replaced, and that we would need a new track.

But they said it would only be €10 for the replacement.

We were startled at such a price difference, but thought we might as well pop into the third curtain shop that was in the same street, just another couple of doors down.

This time, however, the assistant assured us that yes, 'of course' we could replace the old mechanisms. They don't have them in stock right now, she said, but they could get some in. No, we don't need to make an order, just come back next Friday.  The cost?  €5 for two.

So, we'll go back there next week and see if they really can provide an exact replacement.

Larnaka's old airport was replaced many years ago with a new, improved and mostly pretty efficient airport.

Unfortunately,  they have never really sorted out how the parking works.

At first, when dropping someone off or meeting a flight, there was twenty minutes of free parking in the short-term car park. If one parked for longer, there was a parking cost, but it wasn't too excessive. Of course, we, like many of our friends, would sometimes go back to the car after fifteen minutes, drive it out of the car park and then park somewhere else, so as to avoid paying - but in most cases, twenty minutes was plenty.

Then they started charging for all parking.  So people started not using the car park; instead they (and we..) would drive around while waiting for a call, or have one person get out to meet arriving guests, while the driver would find somewhere to stay temporarily, until a phone call alerted them of the arrival. But more and more people did this, and the roads around the airport became clogged, and then the authorities started putting up barriers, or cones, to stop even temporary parking.  They blocked off some of the car parks completely... but the main short-stay car park really isn't big enough.  So at times when we do want to park, sometimes Richard drives around for five minutes or more, just looking for a space.

On Wednesday morning we took Tim to the airport.  We decided to go in with him for half an hour or so, and were there in plenty of time. As usual, the car park looked absolutely packed. So Richard dropped Tim and me near the entrance while he went to look for a parking space.  We thought the airport would be heaving with people, as it often is, given the number of cars that were parked.

To our surprise, it was extremely quiet. There was no queue at all, so Tim checked his luggage in immediately.  Apparently the flight was almost empty.  We sat down and chatted for a while, and during that time saw very few people. Evidently December 27th is not a popular time for flying out of Cyprus. There didn't seem to be many arrivals, either.

So we were not just saying, 'This is Cyprus' in a frustrated way about the lack of parking spaces at the airport, we were genuinely puzzled:  why, with so few people in the airport, was the car park as full as ever...?

We wondered if it was long-term parking, for people who had gone away for a week or two over Christmas, but thought that was unlikely, as there's a separate covered long-term car park.  Could it be for staff?  No, they too have their own separate car park.