Out of Cyprus Summer 2018: The Panama Canal

When we learned that the Logos Hope was due to travel through the Panama Canal at the end of July, we organised our visit to see the family on dates that would take in this experience. Friends told us it wasn't all that interesting, but for those who like ships and navigation, it's a 'bucket list' kind of adventure.

So the ship arrived in Panama waters around lunch-time on July 30th. We could see dry land... but had to be at anchor for at least 24 hours. This was so that a local pilot could come on board, to check that the ship followed all the necessary safety requirements, and also to familiarise himself with the navigation systems. The pilot would be responsible for getting us through the canal the following day.

All was okay, although our original lunch-time slot on July 31st ended up starting nearer 5.00pm. We went outside about half an hour earlier and watched the anchor being drawn up, which took quite some time. The sky was quite cloudy as we set off, and caught our first view of the initial bridge over the canal: 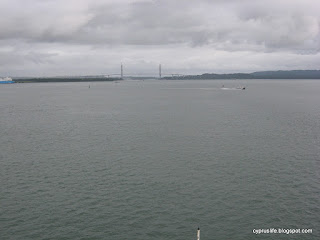 Lots of people in the crew and staff went outside on the viewing decks, to watch our progress. Esther was in the sling Becky made last year, switching between Daniel and Becky, and I mostly looked after David. However he has many friends on the ship, and several other people kept an eye on him and explained what was going on at various points, as we approached the canal. He and I went up to deck nine - at the top, where we had a great view. 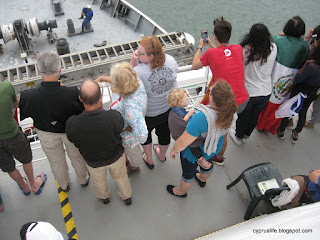 The ship seemed to move very slowly, and David was quite worried as we neared the bridge, thinking that we wouldn't fit underneath. I assured him that the pilot and the Logos Hope officials would have measured it carefully, but he was still concerned. It didn't help that there was a (joking!) announcement made, asking those on deck nine to duck as we went under... 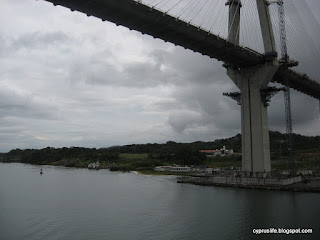 After we were safely through the bridge, and the Logos Hope was still intact, David spotted that there were some 'different deckies': 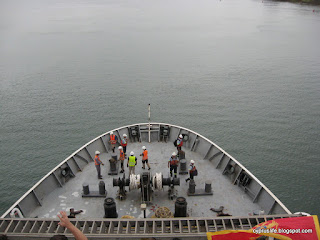 They had come on board to help with the locks. There was a local TV crew at the side, filming the ship - so lots of the crew were waving their national flags - and the 'line-up' team were spotted waving, too. These are the Logos Hope staff who spend two or three months at each port in advance of the ship, preparing for the visit and finding out how they can best help the local people.

I was surprised by how green everywhere looked; but Panama is quite a wet country, and this is the rainy season. My only previous experience of locks was the small ones in Birmingham canals in the UK; these were similar on a larger scale. At the side little engines pulled the ship slowly along, guiding it into each lock: 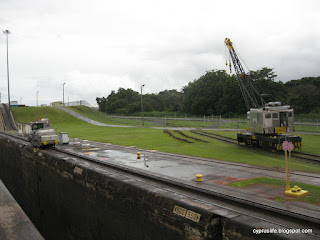 This is a view of the other side - there really wasn't a lot of spare room! 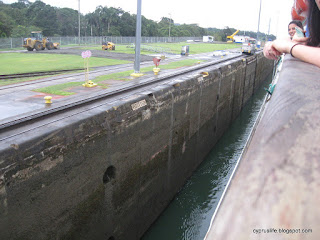 By the time we were through the first lock, it was dinner time; and it started raining. So we went inside to eat, emerging half an hour later with raincoats. More people had come out to watch, so Becky put David on her shoulders to see another lock filling up: 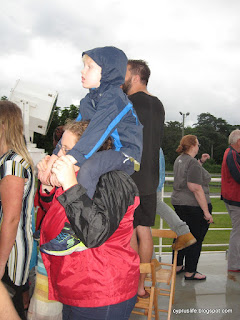 It was beginning to get dark by this time, but this just about shows the second set of lock gates closing: 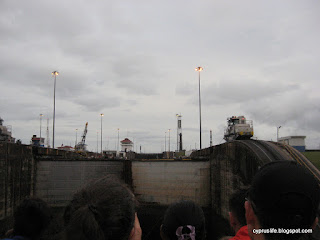 It really doesn't look like much water coming through in the middle, but the ship rose surprisingly quickly: 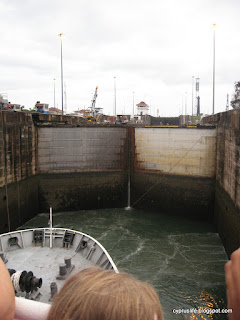 By the time we were in the final lock of the first stage, it was getting dark: 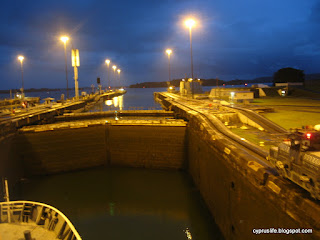 Richard had been tracking everything with his phone. The next stage, he t. old us, was a lake with no locks. It's apparently full of alligators (or perhaps crocodiles; I'm a bit vague about the difference) but since they can't get on board ships, and nobody was planning to swim, this wasn't too worrying. Had it still been light, I might have stayed on deck a bit longer, but it was almost pitch dark by this stage.

Richard had said he was going to stay up until the end, but since that was likely to be at least 1am, probably later, and I need my sleep, I went to bed leaving him to watch with a few other hardy people: 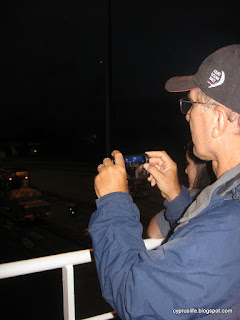 The next thing I knew, it was morning and we were in the port near Panama City. It was good to see dry land after six days at sea, although nobody could leave until the ship had cleared customs, and dealt with everybody's passports. Richard told me it was about 3am when he finally got to bed. The last locks were like the reverse of the first ones - going 'downhill' rather than up. 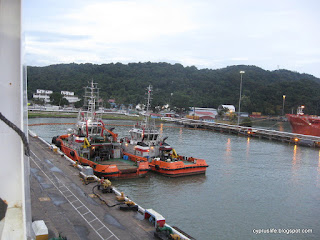 I knew the port was fairly close to the Panama Canal, but hadn't realised quite how close until I looked out in another direction and saw the bridge at the other end: 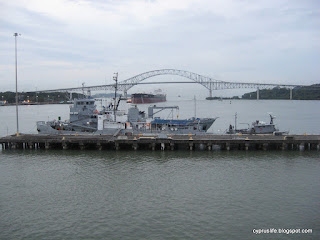 So Richard has now experienced something he's wanted to do for years, and can also now say that he's visited all the continents other than Antarctica - and he has no desire to go there!
Posted by Sue at 21:26