I didn't even have a mobile phone until 2007. By then, almost everyone else in Cyprus had one, and landlines were starting to vanish. After a couple of occasions when I realised it would have been useful to have a mobile, I was persuaded to buy one. As simple as possible, just enabling me to make and receiving phone calls and text messages.

And yes, it was useful. Four years later, when its battery was almost worn out, it was much less expensive to buy a new phone than a new battery. I opted for a similar kind of phone, which had the addition of predictive text, and slightly better storage capacities. And it's done well. 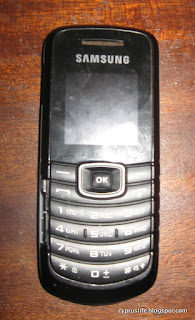 It's been dropped a few times - hence, if you look closely, some missing plastic at the side of the keypad - but has continued to function. It fits nicely in the side pocket of my handbag. I have a camera for photos, and a computer for accessing the Internet, so I had no need for anything more advanced.

I'm also extremely sensitive to vibrations and radiation, even harmless kinds, and when I've had to hold other people's iPhones, they have become uncomfortably 'tingly' within a minute or two. And I found the navigation and usage very confusing. No way did I want anything like that...

In the past six months or so, however, our family on the Logos Hope have been sending photos to Richard and other relatives via WhatsApp, which - for some reason - is one of the few things that works reasonably well on the ship's slow Internet connection. Each time I had to ask Richard to download them on his phone and forward them to my email address, so I could see them on my computer.  It was a bit frustrating to learn that WhatsApp can be used on a computer - but only when connected to a smartphone WhatsApp account.

In April, when I was in the UK, I remembered that my father had stopped using a basic smartphone which he found frustrating, and moved on to an iPhone. I asked my resident technical experts if it would be able to use WhatsApp, and learned that it could.  My father was delighted to pass it on to me, and when I got home I was equally delighted that, so long as I kept it charged and near my computer, I could get WhatsApp photos directly on my computer.

But in the meantime, my basic phone was starting to feel squidgy. In the UK, it refused to send messages to my son's phone. Every time I tried to send a text message to anyone, I had to keep re-typing because the space key wasn't working well.  I realised it was reaching the end of its useful life - I suppose seven years isn't too bad these days.

When we were on holiday in Panama in August, I had to use Richard's second (Android) phone (with a UK chip) to send text messages a couple of times, while he was driving. To my astonishment, it didn't make my hands tingle, and I found it surprisingly easy to use - at least, for sending messages. For the first time, the idea of actually using a smartphone began to seem less unreasonable.

I'm told it's still possible to buy non-smartphones, and I may still decide that's the best option. But in the meantime, I asked Richard if it would be possible to put my Cyprus sim chip in my father's old phone (which is on the Android system) so I could see how easy - or not - it is to use. 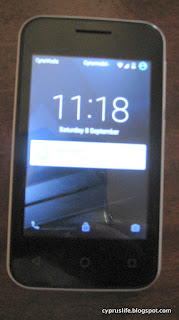 The only way I knew how to remove the chip from the phone was by dropping it. Happily, he knew a better method, and was able to snip it to the right size for the smartphone. Then we learned we needed to unlock it from Vodaphone UK, but since I'd had it for a few months, that simply required an email with some details. A day or two later, the unlock code was sent, and worked easily.

It 's a lot more complicated to send text messages than either of my basic phones, and I seem to have lost my phone contacts... all twenty of them. But there are only two or three people I tend to get in touch with via text messages, so those are now entered. Along with all my gmail contacts, which apparently imported themselves, but aren't much use as they mostly don't have phone numbers attached.

I suspect I'll stick with it, as other friends have done when given smartphones, at least for now.  Which, I suppose,  means that I've finally been dragged through the gate into the 21st century...
Posted by Sue at 13:07

We got our iphones last fall and have adapted well enough after a bit of a learning curve. Not sure what that tingling that you experience is all about though. Mine will vibrate when I have a message and it's in my pocket, but I'm sure it's all configurable.