It took me nearly a week to feel as if I'd recovered from returning to Cyprus. Not that I had any trouble adjusting to the two-hour time difference. And although I'd had a bit of a broken night before flying (continually waking in case I'd missed my alarm...) a couple of good nights' sleep easily made up for that.

Instead, I felt unutterably weary, my brain foggy, my actions slow. Partly it was returning to the heat, I'm sure; yet the humidity is down, less than it was in July before we left, and the temperatures are no more than 31-32C in the hottest part of the day. As I type, it's almost 6.00pm and a not-too-warm 28 outside. It will be dark in a little over an hour.  I had air conditioning on in my study earlier, when the temperature was a bit higher, but not now.

But partly it's something I've come to expect each time I return to Cyprus. Perhaps it's resuming responsibilities for looking after the house, and the cooking, and so on. Perhaps it's a kind of reaction to the end of an enjoyable holiday. Or perhaps it's the way I experience jet-lag, though it's odd that it only ever seems to happen when I'm back in Cyprus after a break.

Still, by Tuesday I'd decided I could manage an early-morning walk with my friend Sheila. It's mostly light by about 6.00am and a pleasantly cool 23C.  We exchanged text messages, and I put on some socks and my trainers, untouched for the past three months.

I grabbed my camera as I left, and took my first photo as we approached the entrance to the trail: 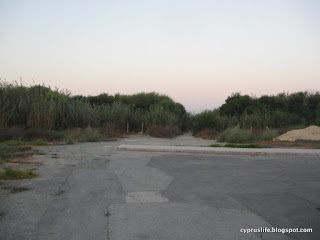 The Salt Lake, when we saw it, has completely dried up. 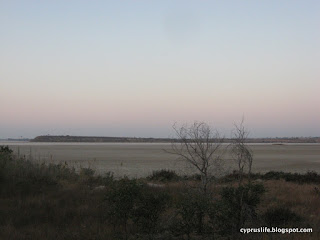 That doesn't happen every year, but we'd had no rain since at least May, and far less than the normal amount in the past year. There are strict water restrictions in place. Not that water gets turned off, as it did when we were first here. But heavy fines are being imposed for people who use hoses to wash their cars, or their patios/verandas, or the pavement outside the house.  Or rather....fines are imposed for people caught doing these things. First thing in the morning, and late at night, we've seen neighbours use their hoses, surreptitiously, to clean their outside areas anyway.

The lack of recent water shows in the general brownness of the sides of the trail: 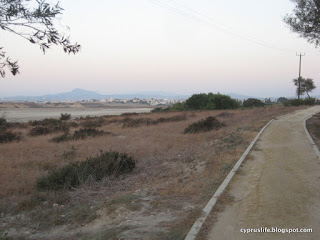 We walked, as usual, to the aqueduct and then back to the opening. About two km in each direction. We weren't walking at all fast, but then neither of us has done much walking in the past few months.

On the way back, I was struck by this rather pretty display of purple flowers: 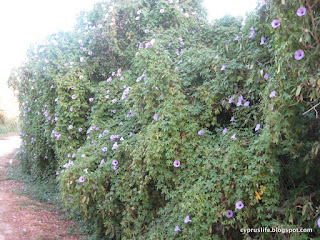 However, some long-forgotten memory of the basic horticultural education given me by my parents told me that it was bindweed. I don't know why I thought that, as the bindweed I vaguely remember from my childhood was white. I suppose there's something about the shape of the flowers.  And, as we looked more closely, we realised that this plant is wrapping itself around branches and even leaves of other plants. 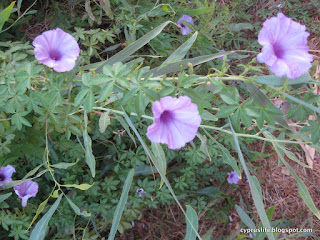 Neither of us recall such a profusion of these purple flowers in previous years. But bindweed is insidious. I doubt if anyone will do anything about it. Most people will admire its beauty rather than worry about what it's doing.

There's a rather obvious spiritual lesson there, which I won't expound upon.

We walked again on Thursday.  Yesterday, there was some rain in the late afternoon. It wasn't heavy, but it was enough to make the whole street look wet. Inevitable, perhaps, as we were planning to barbecue with our friends in the evening - but happily the rain finished in plenty of time to do so.

It was nowhere near sufficient rain to make any different to the Salt Lake, but as I looked out of the window prior to walking this morning, I saw some clouds and wondered if there would be a pretty sunrise.  I was about to grab my camera when I remembered that my new-to-me phone had a built-in camera.

When the moment came that I wanted to take a photo, I wasn't entirely sure how to use the phone. But it wasn't difficult to find the camera icon and press the button on screen.

This afternoon I wondered how I would get the photo from my phone to my computer. Google searching suggested plugging them together via the charging wire, and installing an Android connection app on my computer.  I did that... but the app wouldn't recognise the phone. Perhaps it's too basic.

I looked at the photo, wondering if I could email it to myself, or download it, but there were no options to do so.

Finally, I opened Google Photos, wondering if I could put it there temporarily....

... and to my astonishment, the photo was already there. So I opened Google Photos on my computer, and was able to use it.  Not that it's great quality. It's nowhere near as sharp as my camera photos. I certainly won't be abandoning my camera any time soon.

But it gives a general idea of the colours in the sky; not as impressive as some we've seen in previous years, but still: my first phone photo: 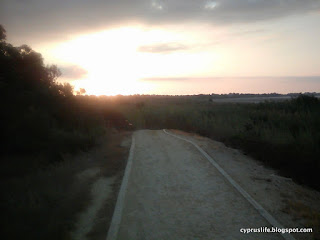 Now that I've got used to using an on-screen keyboard, I don't miss my old phone at all.  I haven't yet worked out how to make phone calls on the smartphone... but I can send texts, and WhatsApp messages, and even quickly browse Facebook without having to switch my computer on.  Richard installed some more hard drive a few days ago - the tiniest hard drive I've ever seen - which means I'm not running out of space any more.

The weather forecast sites don't show any indication that the temperatures are going to drop in the next ten days; 30-32C remains the expected maximum temperature, 22-24C the expected overnight minimum. But with humidity no more than 50%, it's not unpleasant.

September usually marks the last month of summer in Cyprus. Perhaps in October it will cool down a little.