Christmas Decorations... and a few aberrations!

We don't do a great deal in the way of decorating the house for Christmas. I'm not artistic, so we tend towards minimalism - anything more would look cluttered rather than attractive.

But we always put up our artificial tree, bought nearly thirty years ago in the UK when we left it a bit late, and there were no real Christmas trees to be had (or not for a price we were prepared to pay). It has become an annual tradition, over the past nine years, for me to have help from my friend Sheila and her daughters. As they gave grown older, they have started decorating without much assistance, and this year they put the tree together by themselves. 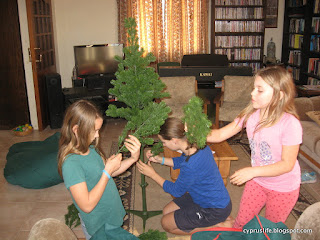 They all remembered that the branches are of differing sizes, marked with letters of the alphabet to match the slots in which they go.

We were amused that K (13) was finding one branch at a time, locating its hole, and slotting it in.  H (10) was checking each branch in turn as she searched for those marked 'A', which she wanted to put in first. And E (8) was trying to sort them all into alphabetical piles before starting.

Despite these differences in approach, the tree was put together with surprisingly little argument. K then lost interest, and the younger girls did most of the decorating. I wasn't watching what they were doing... they decided to be creative, and made it look (as they explained) like a face: 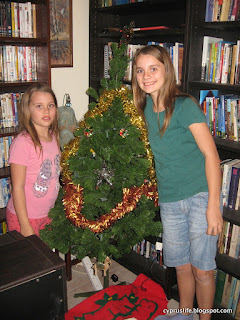 They didn't expect me to keep it like that, so after I'd taken the photo H decorated more traditionally, and I didn't have to change anything later:

Well... other than picking it up and replacing a few items more firmly, after the cats knocked it down. But that has only happened twice so far, within a couple of hours of it going up. Since then, they have ignored it.

Meanwhile, E decided to get out the nativity characters which I knitted back in 2016.  Again, I wasn't taking too much notice, until she told me it was set up: 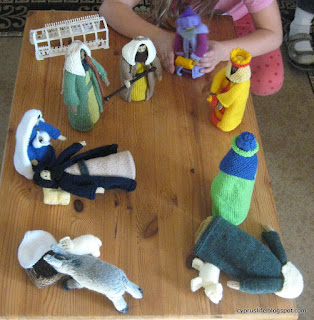 The donkey and sheep, she told me, were having a snack at the manger. Joseph had just acted as midwife for Mary, so he was exhausted and taking a nap (when I said I thought Mary would have been even more tired she rolled her eyes). One of the shepherds was so worn out from his walk to the stable that he had fallen over. And E was still not quite sure what to do with the Magi, since (as she pointed out correctly) they arrived some time afterwards (probably days later, maybe a couple of years later) when the shepherds would have gone home.

I adjusted them later to a more traditional scene: 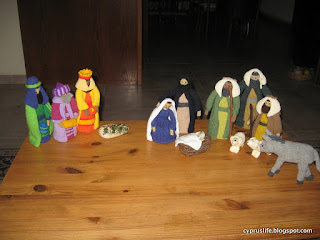 The post to Cyprus at this time of year is remarkably slow. Most years we receive at least half of our Christmas cards after the New Year.  I've got into the habit of keeping the current year's cards in an envelope, to hang up the following December - not that there are as many as even five years ago, as fewer and fewer people send cards.  Only five have arrived so far this year, and they're up on a bookcase. But I had thirty-three from a year ago.

Yesterday I decided it was time to hang up last year's cards.  I managed to get the shorter string up, and hung eleven of the cards only to have Lady Jane take a decided interest: 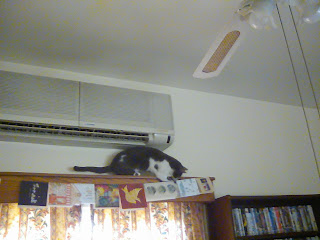 While she was occupied, I started putting up the other string, which is a bit more complicated. I didn't expect her to come leaping towards me along the pelmets.  She didn't expect that brushing against the clock would knock it down and shatter the glass front...

I swept up the smithereens, and thought the clock was history. Then I noticed that it was still ticking. So I thought that perhaps we could at least rescue the mechanism. Further investigation revealed that the oval frame at the front of the clock was undamaged, as was the face, although the two had come apart and there were several broken-off pieces from around the edge. Richard said he thought that perhaps he could repair it... 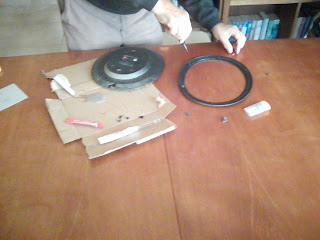 ... and succeeded in doing so.  So the clock, without a cover, is now back on the wall, as are the rest of last year's cards. 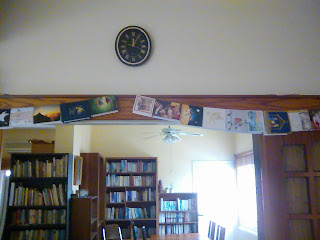 Oddly enough, Lady Jane has not been back to check on the Christmas cards or the string... and since 'her' human will be arriving this evening, for nine days in Cyprus, I hope she'll be too occupied over the next week or so to think about them again.
Posted by Sue at 14:27