When we first moved to Cyprus, we regularly bought bread at an excellent bakery nearby. I knew that it would be less expensive and more healthy to make my own bread, but I didn't get around to it very often. Kneading by hand was hard work - exhausting in the summer! - and although I had a food processor with a kneading blade, I didn't like to use it too often as it felt as if the motor was struggling, sometimes.

Then just before Christmas 2005 we bought a breadmaker. After a couple of false starts, it began to make excellent bread, and we used it several times per week until the summer of 2012 when something went wrong with the motor. It had more than paid for itself in the savings on bread over six-and-a-half years, so we decided to buy a new breadmaker. It was a fairly inexpensive one, a shop's own brand: 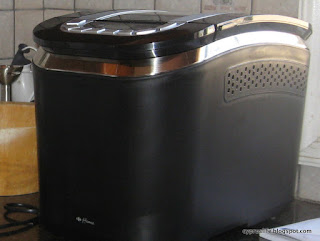 Then it started going wrong. I don't remember what happened, or why we were unable to take it back, as I'm pretty sure it was still under warranty.  Or maybe it still worked, somewhat, but the bread was heavy. Perhaps we had it fixed under warranty, and it still didn't work properly.

I didn't blog about it.. and so have no reference point, other than in our accounts application, where I can see that we bought our next breadmaker in April 2014.  It was from Lidl, on special offer. I remember having a discussion about whether or not it was a good idea to buy another inexpensive shop-brand one, and deciding that we'd try just one more time. 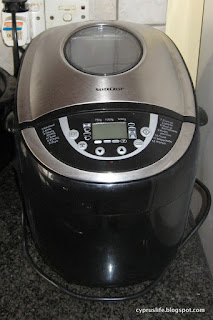 It was a good breadmaker. It had various functions, although as with most appliances I used just a couple of them probably 99% of the time.  I wasn't making bread nearly as often as I did when we had our sons living here, but every couple of weeks our friends with several children come over for a kind of high tea on Sunday afternoons, and I usually make two loaves then, slicing and freezing any leftovers. I sometimes make a loaf at other times, too.

All was well until just over a week ago when we were hosting a birthday party for a visiting friend. I decided to make a loaf of bread for the evening buffet, so put the breadmaker on, only to realise that only one paddle was working.  I tried turning the tin around, so the dough would mix at both ends, and it made some unpleasant graunching noises.  Eventually I took it out, mixed and kneaded it by hand, then put the dough back in the breadmaker, without the paddles, on 'dough' setting so that it would rise.  I made some bread rolls which I cooked in the oven, and they were fine. But I didn't want to do that every time.

Nor did I want to go back to buying all our bread from a bakery. We like home-made bread, and I love the convenience of a breadmaker. Perhaps this one could have been mended, but it was over four years old, and didn't owe us anything; we worked out that using a breadmaker for about six months means it pays for itself in the savings on buying bread.  We hate the fact that so many modern appliances are 'disposable' - getting it mended would probably cost almost as much as a new one, and with no guarantee of continuing to work.

So I went to the website of George Theodorou, where we usually buy large appliances/white goods. Relationships are important in Cyprus, as is customer loyalty.  And they've always given us good service. However they only had one breadmaker listed; it was over 100 euros, and when we checked against Amazon, it was evidently somewhat over-priced and not very highly reviewed.

Last Friday we decided to see what else we could find in Larnaka. Lidl didn't have any on offer, although they probably will at some point. But I didn't want to wait, possibly months. I looked at the website of another shop that sells appliances, but they didn't have any breadmakers at all.  We went to a couple of big DIY shops that sell electrical appliances: Leroy Merlin didn't have any breadmakers. Super Home Centre had one, but it was even more expensive than the one I had seen online, and looked a bit flimsy. We went over the road to Debenhams, but although they have some kitchen things, they don't appear to have any electrical appliances.

We were almost ready to give up, but I suggested we go to the 1st April Street thrift shop, where we've occasionally bought appliances in the past.  And there, in the corner, was a breadmaker. Phillips brand, twenty-five euros.

It looked almost new, so we thought we would try it. It's not a design I would have chosen: 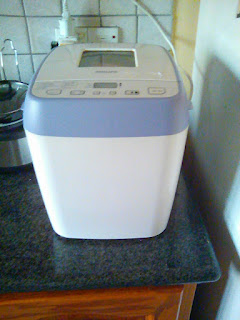 Nor did it have an instruction guide or recipe book included. I was able to find them online, though - the advantage of an unusual looking breadmaker with a purple stripe is that it was easy to find the model via an image search - but decided that I would try, first of all, my normal recipe which has worked in all my other breadmakers. 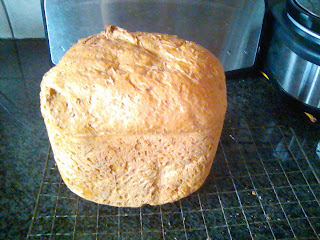 We've got used to longer loaves with our previous two-paddle breadmakers, but this one has the advantage that the bread comes out very easily, rather than getting stuck (which was the worst problem with the Lidl one).

So we're very pleased with this new (to us) breadmaker, and hope it will last us at least as long as the previous ones.
Posted by Sue at 18:30