Once again I take keyboard in hand to write a Christmas Eve blog post.  As usual, I'm illustrating with this year's Christmas cake.  I made it at the start of November, and decided - for a change, I thought - to make it square rather than round.

I thought I might do something a bit different with the icing, but although the home-made marzipan came out beautifully, the royal icing wasn't very co-operative, and I ended up just sloshing it over the cake and then putting ribbon around, and a few of the less tacky cake ornaments on top. 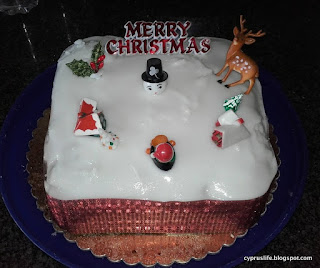 (Yes. These are the less tacky ones.  The ones I didn't use are much worse).

Looking at last year's photo, I realised it's really not much different from last year's cake, which I mentioned in last year's Christmas Eve post.  It was also square. It used four of the same ornaments, although I was a tad more creative with little marzipan snowballs last year.

I wrote about most of our Christmas preparation in my last blog post.  Since then, I've done one or two extra bits and pieces in preparation; but nothing of great import, other than the arrival of our son Tim on Thursday evening last week.  On Sunday we went to the local church Nine Lessons and Carols service, where Tim was the guest pianist (ten years ago he was their organist and choir director).  I very much liked the new Nativity scene, with the communion table as backdrop: 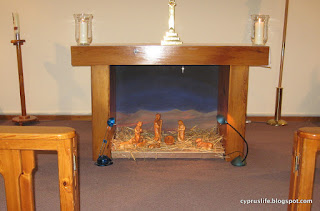 Today Tim cooked the turkey, with two kinds of stuffing inside. Richard carved it, and it's sitting in the fridge now, ready for re-heating tomorrow.  Our menu is much the same as always: in addition we'll have chipolata sausages, veggie sausages (already prepared), roast potatoes, carrots cooked in a little non-dairy spread, steamed brussel sprouts, peas (if we remember to put them on) and sweetcorn.  Plus cranberry sauce, of course, which is very easy to make.

One year we did broccoli instead of brussels sprouts, thinking more people would like it. But there was an uproar from two of the visiting children.  Brussels sprouts, they insist, are their favourite part of the meal.  I don't mind them too much, once a year, and will probably have two or three myself.

I made mince pies and Christmas puddings weeks ago, so they just need re-heating.  Lemon drizzle cake will be the alternative dessert, and some dried fruit (dates/figs/apricots).   Nothing complicated.  There will be ten of us, which is a good number. We'll all fit around the extended table easily.  Of course we'd much rather have our other son and his family here too, even if it meant a much more crowded dining room, but it's not to be. Not this year, anyway.

I've printed the newsletters which have arrived from friends.  I've sent out brief greetings to our email contacts, since we didn't write a newsletter this year.

And our knitted nativity members have been taking a nap, in preparation for the big day, courtesy of our friends' youngest daughter: 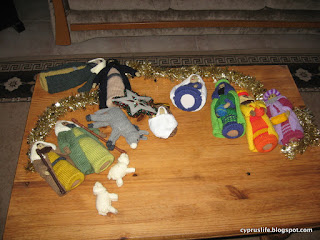 I knew there was something missing from our Christmas -- mince pies. Reading about yours reminded me.