The first two weeks of December in Cyprus

Over the years, Christmas preparation has become easier and more relaxed in our household.  It helps that I have become a tad more organised, and give myself a kind of timetable to get things done. It also helps that we keep it fairly low-key, on the whole, and - most of all - that all the gift shopping is done online.  With no children living at home, no stockings to organise, no grandchildren visiting this year, it's all quite straightforward.

Early in November, I made this year's Christmas cake.  Later in the month I made a batch of mincemeat and some Christmas puddings. I organised and ordered our photo calendars for next year in plenty of time, and also gifts for the family members who will be here in Cyprus.

December 1st, very neatly, was also the first Sunday in Advent.  We went to the morning service at the local church where we're becoming more involved and later I thought about what still had to be done. It seemed remarkably little.

Ten years ago, I wrote and posted at least eighty Christmas cards, mostly to the UK, as well as family newsletters.  Gradually we started moving to email for many of our correspondents, and have lost touch with others. This year, we only sent thirty cards, mostly to family and very long-standing friends in the UK. We also decided, for the first time in thirty years, not to do a 'round robin' newsletter.

On Fridays we use the morning for what we loosely call 'house admin' - in theory doing any odd jobs that we wouldn't otherwise get around to. But more often than not, we do our grocery shopping and check our PO Box, and most of the morning is used up.  However, on December 6th, I had a strange urge to visit this large shop: 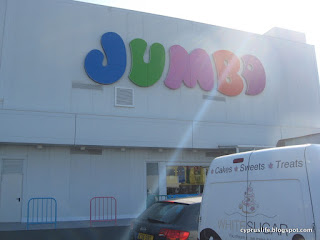 Yes, a lot of what it sells is rather tacky.  But although I don't in general like shopping, it's kind of fun to browse through the kitchen section, amusing ourselves by pointing out all the things we would never buy, and even considering one or two that we might (but don't need).

The Christmas section is huge, and there were plenty of things that didn't tempt us in the slighest.  A dancing Santa and tree, for instance: 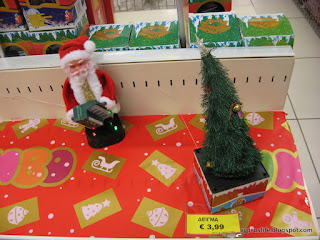 There were a lot of quite attractive decorations too, some of which might have tempted us if we hadn't had two lively cats who would probably destroy them. Unfortunately they only had one kind of Christmas crackers; we had almost run out of our supply from the UK, and I had thought Jumbo would be a good source. We did buy one pack from there but they were a bit gaudy looking.

We also emerged with a sort of snowflake star and a string of LED lights for our tree, some cushion covers for my study and one or two other bits and pieces. But we were mostly quite restrained.

December is the only time of year we go to Jumbo, and it made me feel as if the countdown had truly begun.  We bought stamps and posted the cards, too.  And bought some more crackers at Metro, which had a much better selection than Jumbo.

Later in the day, I started ordering Christmas presents for family members in the UK.  We all have Amazon wish-lists so it's easy to do, and I send them directly.  It's not quite the same in that I don't get to wrap them - but I'm very happy not to have to go to any real shops to buy them.

On Sunday 8th December, the second Sunday in Advent, we went with our friends to the Christingle service. A local choir was taking part, and it was a friendly, enjoyable service.  Several people had prepared large numbers of Christingles the day before, so we all collected them, with the candles lit, and then sang 'Away in a Manger' by candlelight.

While many people ate the raisins and sweets afterwards, I decided to keep ours in the fridge for a few days and then use it as a decoration until the orange starts to go bad: 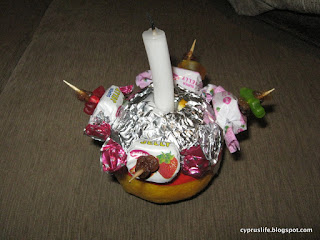 The following day it was the last meeting of the year for the local Christian writers' group, followed by our annual Christmas bring-and-share (potluck) lunch.  Twelve of us were there, and as always there was an excellent spread of food: 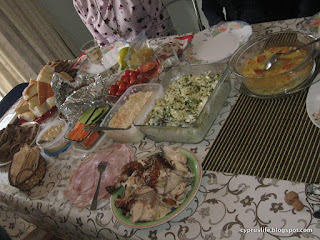 I suppose there's a lot of comfort in familiar traditions such as this.  And on Tuesday morning, another annual tradition was followed.  I got out our modest supply of decorations: 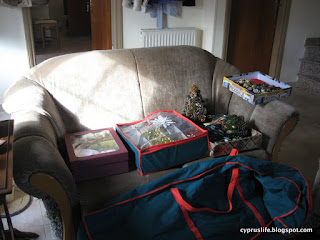 One of my young friends set up the Nativity scene, with the addition of some tinsel and a former Christmas tree star.  The figure at the back, lying down, was supposed to be the third shepherd. But I didn't make a staff for him.  So my small friend announced that it must be the innkeeper, not a shepherd at all.  And she also decreed that he should be asleep.  I suppose he probably was, when Jesus was born... 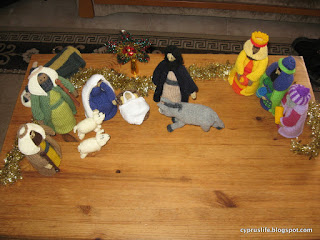 The Kings, of course, should be further away but we always put them all together.

Each year we send and receive fewer and fewer Christmas cards, but I keep those from previous years (many of which don't arrive until January anyway) and hang them up in a couple of places.  And my young friends (two of whom are no longer small) not only assembled the tree without help, but decorated it too. 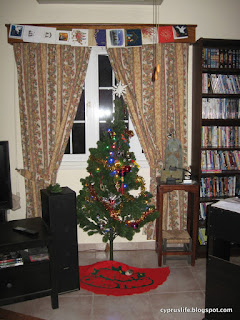 Later in the day, I ordered the last of the Christmas presents for family members in the UK.

On Wednesday, we had an appointment at Immigration, where - in theory - our permanent residency was granted.  We have to wait up to three months for the actual paperwork to come through.

On Thursday we went to a pleasant and thoughtful advent meditation/discussion at the vicarage, followed by another potluck lunch.  Thursday was also the UK general election date. We're not eligible to vote, but we did hope the result might be different from what transpired.  However, this is not a political blog, so I will refrain from further comment on that topic.

On Saturday 14th, we celebrated 40 years since we got engaged, 42 years since our first date.  We went out to lunch in the pouring rain, and had to park in the Marina as Larnaka was packed with shoppers, most of whom had cars.  We had decided to go to the friendly, low-key 'To Kafe' restaurant, which was the other end of the town, but the rain mostly abated while we walked there.  We celebrated in burgers (a veggie one for me) and then discovered that they had a 'fasting' carrot cake (ie dairy free) so Richard had that, and I had a very delicious (and decadent) lemon cheesecake: 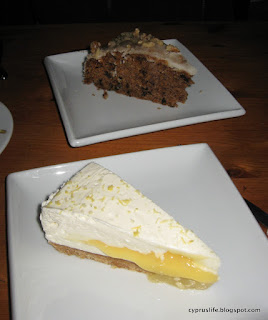 As an added bonus, our friends had been able to get tickets for a local ballet school production of 'The Nutcracker' at the Municipal Theatre.  I don't think I've ever seen it live before; the scenery was excellent, and the whole thing was most enjoyable. 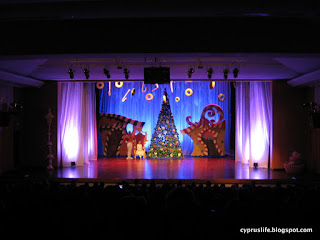 Then on Sunday, among other things, I made our first batch of mince pies: 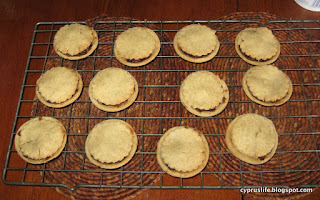 We finished them today so I shall make more tomorrow, along with a few other goodies. On Thursday evening our younger son arrives to stay for a week, and that's when we'll feel as if the Christmas period has truly begun.

I very much like the idea of the pot luck lunches, think we must start doing these again st St.Helenas,

With regards to Jumbos it a must in the heat of summer, I find I can get my daily exercise done here and keep cool at the same time. Marvellous place! It’s also a good place to see how much stuff they sell which you had no idea existed or had and need for. Ie a tea bag squeezer, I obviously have been doing it wrong I use a spoon and fingers.

Good blog Sue . Oh my just looked at the bottom m of the page and I have to tick the box to prove I am not a robot.😂😂😂😂 This is goi g to take some think8 g about xx