Insects in Spices in Cyprus

It was a normal Saturday, late in September.  I usually change the sheets and clean the house on Saturday mornings, in a fairly leisurely way.  Before that on this particular morning I planned to prepare our favourite pinto bean curry for the evening, and put it to simmer in the slow-cooker.  I had also bought a small crate of tomatoes, and was going to make apple and tomato chutney, as we had run out.

I had forgotten to soak the beans overnight, but put them in cold water before going for my early morning walk with my friend Sheila. So when I had finished breakfast (and turned on the air conditioning) I decided to make the chutney first. I chopped onions and apples and tomatoes, and crushed garlic... and realised I didn't have enough malt vinegar.

So I popped out, despite the heat, to the supermarket just around the corner, and bought another bottle of vinegar.

Next I wanted to add the spices.  I opened the jar of cayenne, to add a quarter teaspoonful.... and something moved inside it.  I closed it quickly, and tipped it on its side, and held it up to the light.  To my horror, there were several tiny insects crawling around.  I shuddered, and decided not to use cayenne.  I picked up the chili flakes... and they were crawling too.  Both jars were only about a quarter full, and I could see that the tops weren't fully closed - although we have never had insects in them before.

So I checked every other spice jar carefully. Most were fine, but I also found insects in the ginger and the paprika.  (When I googled later, curious as to what insects could possibly live on hot spices, I learned that they are not unusual.  They were most likely either cigarette beetles or drugstore beetles. I did not research too deeply so have no idea which one it might have been. I don't really want to know).

I have to confess that I temporarily abandoned both my humanitarian and ecological principles.  I did not empty the jars somewhere outside to let the insects escape, and to allow me to put the jars for recycling. No, I sealed the lids as tightly as I could, and put the infested jars, in a sealed plastic produced bag, in the dustbin.

Then I went to the supermarket again, despite it being even hotter, and bought new jars of the four relevant spices.

By this time the beans were ready to be boiled, so I finished making the chutney and put that to simmer. Then I thoroughly cleaned the spice rack, and sprayed it with biokill, before replacing the jars. 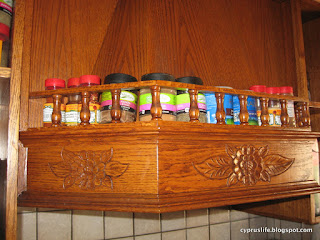 It was past eleven o'clock by the time I put the curry in the slow-cooker, but it's a fairly forgiving recipe and was fine.  It was later still when I finished the chutney.  The kitchen surfaces were chaotic so I sorted them... and I still hadn't started cleaning the house.  So much for a relaxed afternoon reading and possibly writing....

The dusting and mopping was rather cursory that day. But at least the spice shelf was considerably cleaner than it had been, and I had - hopefully - a year's supply of apple and tomato chutney in the cupboard. 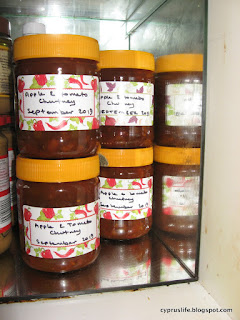