A week of lockdown in Cyprus

As I said in the last post, from 6.00pm a week ago, Cyprus has been in 'lock down' mode. We aren't just advised to stay at home, we are required to do so by law, unless we have an acceptable reason for going out. And when we need to go out, we either send a mobile text message, or fill in a form (printed or hand-written) stating the reason. At least, that was the case until today; now anyone under 65 must request authorisation by SMS, and we can only go out once a day at most (other than for urgent medical problems, or to walk a dog).

There are those who find this extremely irritating, or even an infringement of liberty. Every day in the past week, the police have booked over 100 people around the island, either on foot or in a car, flouting the rules. Last night there were reported to be around 300 violations. It's not stated whether they didn't have the right documentation, or were in groups bigger than two people, or had been out too long, or something else. But each time someone is booked, they are either fined 150 euros on the spot. or taken to court.  I assume the latter is for the more dangerous violations, or perhaps for resisting the police. From today, that fine has doubled.

For us, while of course we don't LIKE being stuck at home without seeing anyone else, it seems like an acceptable way of trying to fight this awful pandemic. Cyprus is still seeing 10-20 new cases each day, and seven people in the main part of the island have died so far.  Possibly one of them, who was already ill, might have died anyway; but at least one was otherwise fit and healthy with no prior conditions.  The fewer people everyone sees, the easier it is to track contacts when someone is diagnosed with the virus, and - hopefully - the quicker it will be stopped.

Wednesday felt a bit strange. My phone alerted me to the monthly church book sale, which was, of course, cancelled. I was watching the news, and the worldometers site too closely - but fortunately for me, I had a project: to check continuity and proof-read a novel which my father has been writing and tweaking for at least five years. We decided at the end of last week to go ahead and self-publish it via Amazon KDP.  The title is 'The Finneal Solution'.

It was helpful having something specific to focus on for a few hours each day - and as of a couple of days ago, the novel is online, available for purchase.  Unfortunately, with postal restrictions and delays, the paperback edition won't be delivered for weeks.  So we've made the novel free in its Kindle version, until the end of this week. (If you try to download it, and your Kindle is registered to a different country, you should be able to find it, using the same code, at any of the other Amazon sites).

On both Tuesday and Wednesday evening, we couldn't really concentrate on anything. The pandemic keeps spreading. We can pray, and we can self-isolate, but there's nothing else we can do to help.  However, I realised, as the week progressed, that I actually felt less anxious than I was the previous week. We knew a full lockdown was possible, maybe imminent; but we didn't know when it would happen, or what it would involve. But now we know. We can no longer decide whether or not to see anyone else - it's forbidden.

On Thursday night we decided to play a two-person came of Cities and Knights, for the first time in many months.  Usually our closest friends here come over to play the game with us - usually on Wednesday nights, but sometimes Thursdays.  We also play it with them every other Sunday. But that won't be happening for a while.

Alexander the Great was surprisingly disturbed. Instead of settling in the box lid, as he usually does, or even walking over the game to get our attention, he kept nuzzling the chair that Richard usually sits on to play the game, and mewing. It appeared that he was telling us we should wait for our friends... 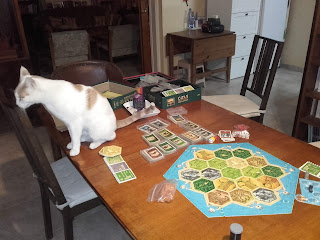 One of the regulations which has been in force for a couple of weeks now is that supermarkets and other food stores are open only for over-60s and other vulnerable people between the hours of 6.00am-10.00am.  I won't be sixty for another few weeks, so although I prefer to buy fruit and vegetables at the fruitaria when it opens around 6.00am, I went at around 6.00pm on the Monday, before the lockdown, to make sure we had sufficient produce for the week.

I had hoped to wait until yesterday before going again, but by Friday it was clear that we were running low on fruit. It's important to stay as healthy as possible during this crisis, and to build up our immune system as far as possible. We've both had colds which seemed to be lingering, though not serious. We've been taking extra Vitamin C, and a little Manuka honey to ease sore throats.  But I didn't want to run out of fruit.

So on Friday, feeling oddly nervous, I sent a text message in the required format to the number given in the online press, and received a reply within a couple of seconds, telling me I was authorised to go out for a reasonable time. So I took my shopping trolley and ventured out.

Here's some of what I wrote on Facebook after the event:

The streets were pretty quiet as I walked there with my shopping trolley although there were a few people zooming up and down on motorbikes. At the fruitaria, which is about 500m from our house, there were disposable gloves by the door, but nobody enforcing them, nor checking my age, or ID, or stopping me going in.

It wasn't very crowded, so I'm sure there weren't more people there than there should have been, but nobody seemed to be practising social distancing... Nobody was coughing or sneezing, so I guess there's no problem but it felt a bit disturbing.

When I got home (with no spot check from the police) I looked at my receipt out of curiosity, as local delivery folk charge per 4kg of produce (I believe).  Apparently I bought around 15kg fruit and veg (at a cost of about 18 euros in total). We have plenty of other groceries in the cupboard and freezer, so all we need is fresh produce.

It occurred to me after writing this that 15kg fruit and veg sounded like quite a lot for two people for one week.  Then I remembered that 7kg of that was the oranges which I use to squeeze fresh juice each morning;  from about a kilogram of oranges we get around 400-500ml juice.  So in fact it's only about eight kilograms of fruit and veg for the two of us, or a little over 500g each per day (plus the juice). And that sounds like not much at all... according to the BBC site, 400g is the absolute minimum anyone should have each day. We're over that - but not much.

But that's a digression. I expect to go to the fruitaria again on Thursday or Friday this week, but hope not to have to do any other shopping for the next couple of weeks. I know some people like to shop more often, and some don't have the funds to do a big shop once a month, but we're in the fortunate position of being able to - and we went a little more often right before the lock-down, to make sure we had plenty of crucial things like cat food and cat litter!  We had also visited the nut warehouse to stock up on nuts a couple of weeks earlier than we needed to.

As well as his regular work, and doing the cover design and layout for my father's novel, Richard was working with St Helena's Church staff to try to arrange a live streaming from their house, since we're not supposed to go out or meet other people, even in a church building.  He tried various things, and hoped to make it work - unfortunately, this morning, it didn't upload properly. He was using a Skype link to the vicarage, and trying to livestream at the same time; we have quite a lot of bandwidth in our contract, and he used data on his phone too, but it wasn't good enough.  So, an hour later, they did the service again (about twenty minutes, all spoken) which he recorded, and then uploaded later.

So although the lockdown didn't actually come into force until a week ago this evening, by the end of Sunday it felt as if we had come to the end of the first week, and it had been fairly constructive.

Monday morning did not feel so positive. I don't have the same need of socialising as Richard does, but even I was beginning to wonder when this will all end. We have a lot to be thankful for, I know; we're safe and healthy in a spacious and comfortable house, we have good Internet connections with family and friends even if we can't see them for the foreseeable future.  Video chatting with our grandchildren most days, even for a few minutes, lifts the mood a little. And we have each other. It's much more difficult for those who live alone, or who are vulnerable and cannot get out, even for half an hour, to buy groceries.

But still. Cabin fever is setting in.
Posted by Sue at 17:43