When I wrote the last post, things were basically okay. We could see a limited number of people, we were washing our hands regularly and mostly staying at home, but it was fine to go out for walks with family or friends.

On Sunday, we drove to the St Helena's Church building so that Richard could live-stream a short service. There were only four of us there, keeping our distance from each other, and although there was a problem with the sound, it went well and people seemed to appreciate it. We hoped to repeat the exercise next Sunday.

In the afternoon, our closest friends came over for a game, a film for the children, and a shared meal.  This has happened every other Sunday afternoon for years; I wondered if it would be the last one for a while.  At 7.00pm we lit a candle in the window, in solidarity with family and friends in the UK (and many in Cyprus) doing the same thing, to indicate that we were praying about the coronavirus pandemic. 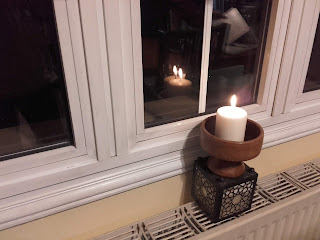 It was a little precarious, so we couldn't leave it there once we left the room.  After our friends had gone home, we went out for a walk, along the deserted sea front where we saw a handful of people and cars. We were rather concerned at the number of teenagers and young adults who seemed to be hanging out together, laughing and chatting and not even moving aside to pass in the street.

So it was no surprise, really, when yesterday evening the President announced that Cyprus was going into lockdown mode for three weeks from today at 6.00pm.  It wasn't immediately clear what this meant, but the article kept being updated.  We can no longer go out for walks or to each other's houses; the parks and beaches and other public areas outside will be closed down.

Apparently, over the weekend, groups of young people and families had been out socialising, disregarding all advice.  Not just in twos and threes for exercise, but in large groups.  This kind of thing potentially spreads the virus easily, and makes it much harder to trace all contacts if someone does contract it.

It didn't help that there were 21 new cases of the disease in Cyprus on Monday; over double the number reported on Sunday.  It's a small island, and the government wants to stop this thing so that, at least internally, we can go back to some measure of normality.

So this morning my friend Sheila and I went out for our last walk for three weeks.  We thought about it as we went into the Salt Lake Park, which will be closed from tonight onwards: 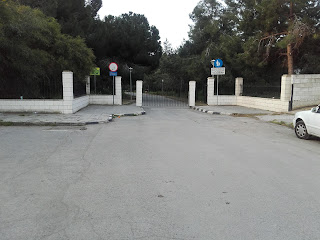 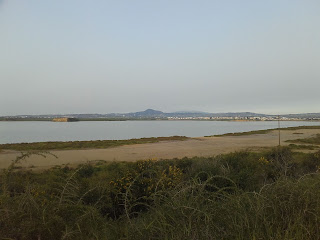 And I realised I hadn't even thought about the fact that March is 'yellow month' in Cyprus.  There didn't seem to be nearly as many yellow wild flowers as usual, but this one stood out: 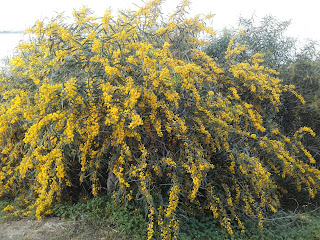 Sheila came over with her girls, mid-morning, for our last Tuesday morning of games for a while... we hope our goodbyes are only for three weeks, but nobody knows.

This afternoon I learned that not only do we need to have a good reason for leaving the house at any time in the next three weeks, but we must either send a text or fill in a form explaining who we are and where we're going. The authorities won't refuse requests, so long as we're not asking all the time... but it feels quite disturbing.  Not complying with the regulations will lead to an on-the-spot fine of 150 euros.