The middle of April, still under Covid-19 lockdown in Cyprus

Two weeks ago, the last time I posted, we hoped that the lockdown in Cyprus would prevent the spread of the coronavirus, and that the island might start to open up again on April 13th, as was first proposed.

It was no surprise, however, that this didn't happen.  Instead, the lockdown was extended until April 30th. And most recent news reports suggest that it might continue beyond that, with a few changes starting to happen mid-May.  That's another month. I like being at home, and my own company. But I'm finding it increasingly stressful, not being able to go out any time I wish, not seeing friends, not going for early morning walks. For those more active and extraverted than I am, it's extremely frustrating.

So we take one day at a time.  We try to stick to our normal daily routines as far as possible, eating regular meals, taking showers and getting dressed at the usual times.  I've been waking up around 6.30-7.00am most days. I have taken the opportunity to do a bit of watering and weeding amongst the plants in our side garden and front patio.  The herb planter has survived this winter much better than it did last year.  The basil and oregano died off, but the rosemary and aloe vera are still thriving, and the mint is threatening to take over entirely: 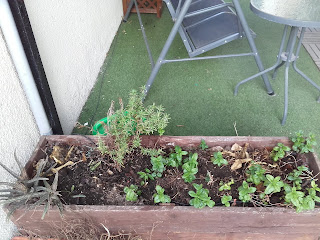 I was also pleased to see that a plant given to me by our younger son a year ago has not just survived, but is about to start flowering again: 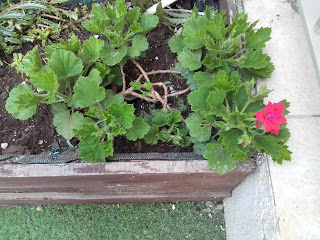 After doing a bit of gardening each morning, I walk up and down around the side garden until I've done around 1000 steps. A very small amount, but at least I start the day with some fresh air and a tiny bit of exercise, without having to get permission to go out.

We've been out for a few walks in the evenings.  We have to ensure we stay within about a kilometre of our house, but that still gives scope for a fair bit of walking. We haven't been every day; sometimes it rained, sometimes Richard was too busy, sometimes we just didn't feel any inclination.  On Fridays I use up my once-a-day permission going to the local shops.

A few days ago when we set off to walk we realised that our white-and-brown cat Alex was accompanying us: 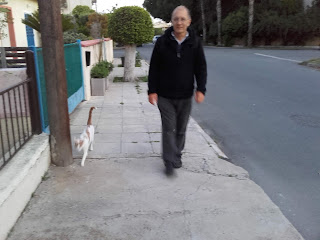 He used to do that when I went for early walks, until we shut the cats in the kitchen area overnight.  This is the first time he's done this in a long time.  So we walked around our block, Alex trotting with us all the way. When we got home again, we took him inside, and then went on our longer walk.  We did wonder what would happen if we put a collar and lead on him; Alex has a few dog-like tendencies. But we really don't want him to learn about routes that go further from home than he goes already, and suspect, in any case, that he would hate it.

Alex has not been so popular with either of us on three occasions in the past week, including this morning, when he caught a bird out on the balcony at the top of the house, then took it into Richard's study to eat.  It always leaves a terrible mess of feathers and worse.  He's caught birds on occasion before, but never quite so many in a short period of time.

I have continued going to the local fruit shop on Friday afternoons, as described in the post a couple of weeks ago.  The second time, on April 3rd, my experience was very similar.  I returned home with around 15kg fruit and veg, hoping I was not infected with anything as social distancing wasn't enforced, although most people were being careful. There were rubber gloves and open doors. Nobody was coughing.

Last Friday we needed a few extra things in addition to fresh fruit and veg:  grape juice, sugar, coconut milk, chocolate chips, matches.  Perhaps they weren't 'essential' in the way that fruit and veg are; I could make coconut milk with desiccated coconut again, Richard could drink water instead of diluted juice; we could not have any chocolate mug cakes on Sundays.  But they seemed important enough to me that I went to the mini-market opposite the fruitaria first. I did also buy some extra cat food, which is certainly essential in our household.

My trolley wasn't big enough for everything so I carried two bags back over my shoulders in addition, and this is what I unpacked: 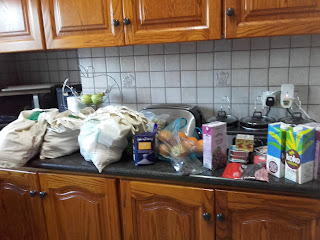 I wiped down all the tetrapacks with kitchen roll and liquid soap, just in case they were infected. But didn't want to do that with the sugar, which is just in a paper pack.  So I put it in the back of the cupboard. We still have some open sugar, so by the time I start this one any viruses should have vanished.

It's not supposed to be possible to catch the virus from actually eating anything, but I still separated the new fruit and from the few that were left from the previous week: 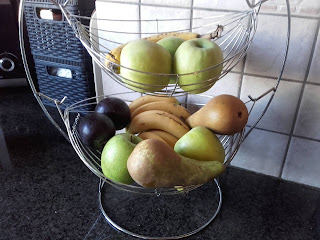 (If that looks like a pitiful amount of fruit for two people for a week, I should add that there were also about 24 oranges and 500g strawberries which went straight in the fridge).

Unlike many of my online friends, I haven't done lots of extra baking in the past few weeks. I've made bread with the breadmaker, of course, and Richard makes a chocolate mug cake to share each Sunday after lunch.  But we've felt the need for extra sweet stuff. The first week, I had found a pack of Lidl chocolate biscuits at the back of a cupboard, well past their sell-by date, but still in good condition. So we ate those over the course of that week.

Then I decided to bake a coconut-chocolate thing that's very quick and easy:  just sugar, eggs and coconut on a chocolate base.  Except that we were a bit low on eggs, so I decided to use a substitute and thought a chia egg would work. It looked a bit odd - almost like the inside of a dragonfruit - but tasted just the same as the usual recipe, and, if anything, held together better. 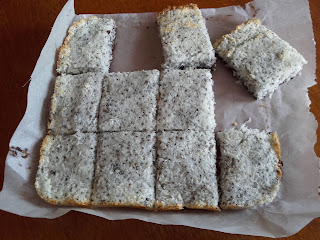 When we had finished that, I decided to try our family favourite one-bowl brownie recipe.  When our son makes it, it's always perfect.  I did substitute three tablespoons of aquafaba for one of the eggs, but basically followed the same directions.... and failed. At least, I failed in making brownies.  Straight out of the oven, it was messy and gooey (albeit tasty).  But after a night in the fridge, it  turned into delicious brownie-flavoured fudge. 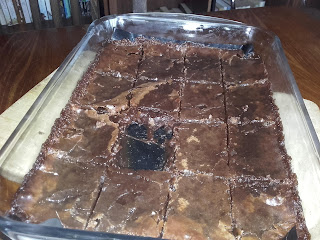 As for communication with others, it's been limited to online. We've had some lovely Whatsapp video chats with our grandchildren, and an enjoyable Zoom family meeting last weekend for a birthday.  Since none of us would have been together even without the lockdown, it's one small benefit, I suppose, that we've made the effort to connect the family this way.  I hope that will continue.

We've had Zoom meetings, too, of some of the St Helena's church congregation after (or before, last Sunday) the online services which Richard has recorded remotely, edited and uploaded.  And despite my being an Introvert, I find these online chats encouraging and even energising.

We've played a few games online, too. My friend Sheila and her daughters usually come over on Tuesday mornings to play board games. We can no longer do that, so we've managed to play 'One Word' and also 'Taboo' via Facebook messenger: 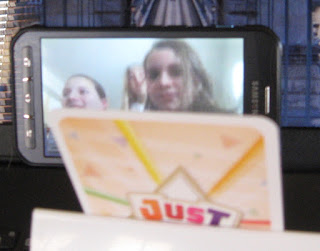 We had a family game of 'Drawful' one night, with our sons and daughter-in-law.  It's a short game, and perhaps a tad silly, but very enjoyable nonetheless.  It worked very well in three different locations. 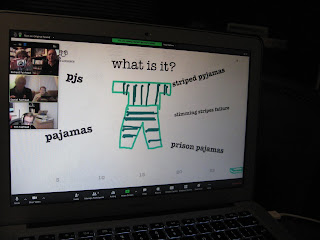 Naturally we also played Settlers of Catan with our local friends which worked well by Zoom. 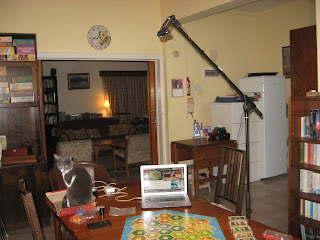 We did a five-player version with our sons, although it was a bit slow-going. Then last week, Alex tried to stop us.  We call this picture 'Cat-on': 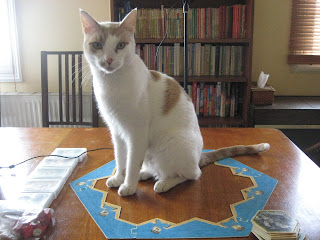 Zoom allows one camera to show the board, and the other to show us so we can chat while playing. Much easier than when we first thought started playing Settlers via Skype with our younger son nearly ten years ago. 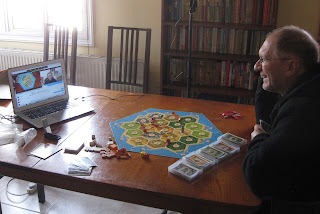 So three weeks have passed. In addition to a bit of cleaning, regular cooking and laundry etc, I have read books and written reviews, scanned slides, posted on help forums, updated the St Helena's website, and spent far too much time reading online news updates.  They are mostly very depressing. So many people have lost loved ones. Many more are struggling for their lives, without even being able to have their loved ones at their sides. We may be a bit frustrated here, but we are safe and healthy, at least so far.

By the end of yesterday, Cyprus had 695 people who have tested positive to Covid-19,  and twelve people who have died of it.  The government has opted for extensive testing, tracking down every contact of everyone who tests positive, so many are found who are asymptomatic. Numbers are not increasing significantly, but they're not yet decreasing either.

Not knowing much about the illness makes it worse.  We know that people with underlying health conditions, or who smoke, are more likely to have it more seriously than those who are fit and healthy.  We also know that older people are more likely to have it badly than younger people.  But there are exceptions, and some young, apparently healthy people have died through complications.

Are there people who are naturally immune? It would seem likely, as many who come into contact with affected people do not test positive. In countries where there is limited testing, it's possible that contacts had the illness asymptomatically. But that's not the case here, where every possible contact of affected people, all hospital workers and most other frontline workers have been tested.  Does virus load make a difference?  Probably.  Hence the importance of self-isolating as far as possible.

So we wash our hands a lot, and keep away from everyone, giving a wide berth if we're out for a walk and meet anyone.  We eat plenty of fruit and veg in the hope of staying healthy. We also eat the extra cakes and chocolate to reduce stress (at least, that's the theory).  We've heard all kinds of speculations about possible drugs or other things that can help, many of them either untrue, or exaggerated, or potentially dangerous. Most are not available over the counter anyway.  But we do take extra Vitamin C and try to get a bit of sunshine each day for Vitamin D. If we feel any hint of cough or sore throat, we take manuka honey, which has some anti-viral properties. Perhaps these things don't make any difference, but they're unlikely to do any harm.

In the next week we really need to visit our PO Box; we're not sure quite what category of authorisation that falls under. But we might combine it with a visit to a supermarket, which will become necessary soon as our supply of cat litter is running low. It will probably be the highlight of the week.
Posted by Sue at 17:39