After the first week of relaxed regulations

Living in Cyprus, where the infection rate is low and where we don't personally know anyone who has been diagnosed with Covid-19, the situation still feels almost surreal at times. We read news sites, both local and international, and our hearts go out to the families and friends of those who have died.  But when we come across people who don't believe it's nearly as bad as reported, we can almost understand why they feel this way.  For most, the disease is mild. Many are exposed but don't catch it. Every day the Cyprus papers report hundreds of tests of known contacts, yet only a handful test positive.

Since I last wrote, we celebrated Greek Easter, albeit in a somewhat subdued way.  On Greek Good Friday (April 17th) I made hot cross buns for the first time in many years. Half a recipe was sufficient to make eight, and while they weren't very beautiful, they tasted good on Good Friday and Easter Saturday: 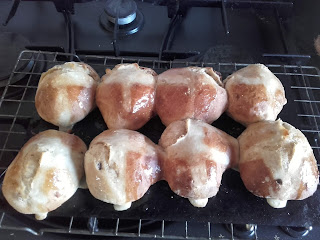 For Easter Sunday, we decided to have a proper roast lunch.  We almost always have a cooked meal at lunch-time on Sunday, although for the rest of the week I cook in the evening. But we don't usually bother with a roast chicken.  However, I made an expedition - using up my one authorised absence from home for the day - to the supermarket around the corner on Easter Saturday, to buy a chicken. 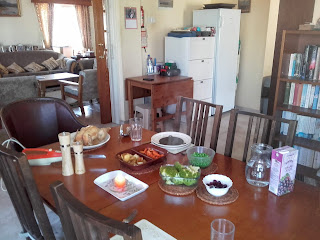 I also made cranberry sauce, as we had frozen some cranberries left from Christmas, roast potatoes and three kinds of vegetable.

Last year we bought some silicon moulds for chocolates, and I filled them in two different ways, wanting to make an equivalent of creme eggs that were dairy-free.  This year I simply made a dairy-free coconut mixture, something like the middle of a Bounty chocolate bar, and filled a variety of chocolates with that. They worked very well. 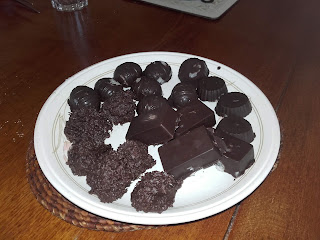 Of course, since we couldn't share either the lunch or the chocolates with anyone else, they lasted us a long time.  We had cold chicken on the Tuesday, fajitas on the Wednesday, and still froze some more for future pies. The chocolates lasted us all week.

I celebrated a milestone birthday that week, too.  I made a carrot cake, and for the evening spanokopita, my favourite food (dairy-free versions of both). We were eating them for several days, as we had nobody to share them with. In the evening, we went out for a walk. It was a very low-key birthday. I'm not sure what we'd have done if we had not been in lockdown; we hadn't made any plans. Just as well, really.

I mentioned in my last blog post that we were running low on cat litter.  But we had sufficient for the Easter weekend, even though it makes me a little anxious when we're close to the end of something. I usually buy new cat litter when we are down to our last couple of bags.  Instead, we almost reached the end by the time we went out shopping together, with the car, for the first time in over five weeks.  We did remember in time that Friday May 1st was a public holiday, so we went the day before.

To make it worthwhile both getting authorisation for shopping, we went to three shops (and the Post Office before that).  The first one was the shop we call the Nut Warehouse, where usually we can select different kinds of nuts to put in paper bags, though seeds and dried fruit come ready-packaged.

This time, however, even almonds and walnuts were pre-bagged.  The staff were wearing masks, but as there were no other customers we both went in.  When we got home, knowing that the coronavirus lasts less than 24 hours at around 20 degrees, but potentially up to two weeks in the fridge, I spread our purchases out on the work surface and left them until the following day: 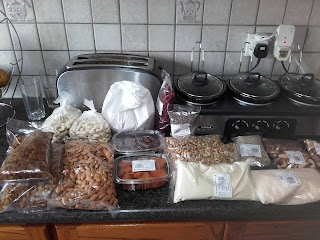 Not that there have been any recorded cases of people becoming infected through stray viruses left on packaging, but it seemed safer not to refrigerated anything, even though it had all been at room temperature in the shop probably for at least a day or two already.

We went to Metro too; since they were counting people in and out, Richard stayed in the car and I went in. Someone waved a thermometer at my forehead, and told me to sanitise my hands and put on plastic gloves, People were pretty good about social distancing, and since they were limiting customers, it wasn't crowded. I bought four bags of cat litter and a few other bits and pieces that we were running low on.  We also went to the froutaria together, for a change.

When we got home, I noticed our glass recycling, which we'd forgotten to put in the car.  This is what six weeks of glass looks like for us: 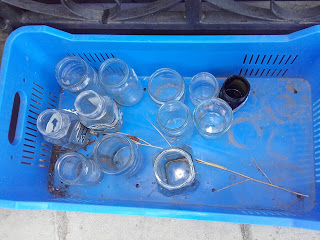 One empty Marmite, two small instant coffee jars, one honey jar, one jam, a mayonnaise, and a few others.   We'll take them next time we venture to Metro.

May Day was inevitably muted; the government was wise to extend the full lockdown until the following Monday, rather than relaxing regulations on May 1st, as it would have been difficult for people not to want to march and congregate.

But on May 4th, since the statistics were pretty good, the first phase of relaxation began.  During lockdown, we were supposed to stay at home unless we had to get out for essential reasons (which included exercise) and could only go out once per day, sending a coded text message to get authorisation.  Now we can go out three times per day, and are no longer limited to 'essential' outings.  The construction industry has started up again, and many shops have opened.  We're no longer limited to exercising within a kilometre of our house, though we must stay in our district. And it's permitted for two unrelated people to exercise together, so long as they observe social distancing.

What a difference it makes to be allowed out three times per day!  I had not been out for any early morning walks for six weeks, not wanting to use up my one chance of getting out of the house in cases I needed to shop later, or go out for a walk with Richard.

So on May 4th I went out for a local walk on my own, just because I could, first thing. And in the evening we went down to the marina for the first time in six weeks.  It's about a kilometre and a half away, and certainly not 'essential'.  Richard was worried that there would be a lot of growth around the sides of the boat, but was pleased to find that it wasn't too bad at all.  He opened her up for a bit of fresh air, and emptied out the dehumidifier, but it wasn't overflowing. 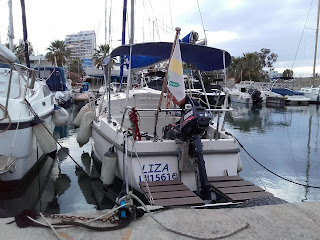 It was strange seeing Europe Square, opposite the marina, almost deserted: 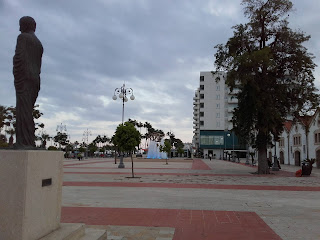 On Tuesday, since two unrelated people can now exercise together, I resumed walking with my friend Sheila. 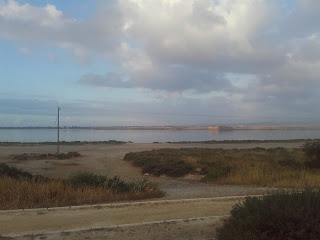 We weren't sure about the Salt Lake trail, as it's only about 1.8 metres wide, but mostly we walked on either side, or one of us was slightly in front of the other.  Perhaps we weren't always quite 2 metres apart, but we observed the social distancing principles, and when both facing forward and walking it would be almost impossible for a virus to be transferred if one of us happened to be infectious.

Then on Wednesday evening, Richard and I went for a short walk along a part of the trail, so - for once - I saw the Salt Lake at sunset: 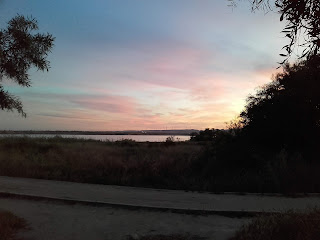 We still can't have any gatherings in our house, or go to anyone else's home. Not that our neighbours seem to be taking this too seriously, but they have many fewer visitors than they used to. Richard can't take his boat out for a sail, though he hopes to do some work on her in the next week.

If all is well, the next phase of the relaxation will start on May 21st, and he'll be able to sail then. We'll also be able to gather in groups of up to ten people, and are very much looking forward to doing so.  Yesterday there were only two new cases of covid-19 in Cyprus, and today only one new case.

This is very encouraging;  with six days of relaxed regulations, a spike was expected.  That may still happen next week, but figures suggest that the virus is almost entirely gone from the community.  There are still around 400 active cases, around ten of them serious, but extensive testing is not revealing widespread infection. Early lockdown with rigorous tracing, isolating and testing seems to be a good method of combating this horrible thing.

So life plods on.  We're still playing Settlers of Catan by a Zoom online meeting with our friends one evening per week. Richard is still recording (again via Zoom) and uploading services for St Helena's Church to premiere on Sunday mornings.

But, all being well, we're hopeful of resuming something closer to normality within the next couple of weeks.
Posted by Sue at 18:52