Life in Cyprus as lockdown eases

The heatwave I wrote about in my last post reached the hottest temperatures recorded in May, and lasted almost a week. So despite being allowed to exercise with a friend, I didn't go out much at all. Even at 6am - the earliest we could leave our premises, during the curfew - the temperatures reached 27 degrees and by 8am it was over 30.

So I was very thankful that we cleaned the air conditioners, and even more thankful for the new air conditioning units which were installed just over a week ago. They are quiet, and efficient, and the air feels fresher when we use them.

On Thursday May 21st, since the new coronavirus cases remained in single figures in Cyprus, phase two of the lockdown release started. The curfew was abolished, and we no longer had to send text messages for authorisation to leave the house. Restrictions on travel are gone, so we can visit other parts of the island if we wish.  Best of all, we can meet friends, outside or in houses, so long as there are no more than ten people (including children) at a time.

So although it was still too hot to walk first thing, my friend Sheila and her daughters came over on Thursday mid-morning to play some games in the air conditioning in my study.  And in the evening, when it wasn't quite so hot, we had a barbecue in our side garden.

I didn't leave the premises at all on Thursday, but on Friday we did some grocery shopping, feeling a little strange not sending a text message. I don't know what would have happened if we had sent one anyway.  And in the evening we went to our friends' house for a meal, as we normally do. Thankfully it was significantly cooler then, and on Saturday morning cool enough for me to walk first thing. We went to the aqueduct, for a change. The foliage along the Salt Lake trail was already starting to look very brown: 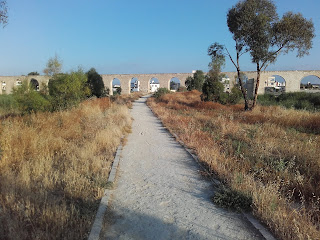 Later I cleaned the house, as I usually do on Saturdays - although the previous week it had been so hot I did almost nothing - and in the evening Sheila came over for a non-Catan board game.  Agricola was the one on the top of the pile, which we had not played for about three months with the lockdown. 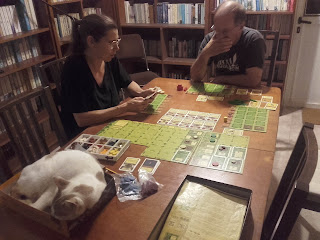 With the statistics for Cyprus being so good, the government decided to allow churches to begin meeting again that weekend, so long as the official protocols were observed. So they required hand sanitiser on the way in, no more than one person per 8 square metres of space indoors, no hugging or shaking hands.  Doors and windows must be open, and general physical distancing is expected. External loudspeakers can enable people to sit or stand outside if there isn't room inside, or if they prefer to stay in the sunshine and fresh air.

This was mainly for the benefit of the Greek Orthodox church, of course. But St Helena's folk were keen to meet again rather than having online services, so Richard set up a speaker for the courtyard, and the clergy arranged the seating to allow for physical distancing in the building. 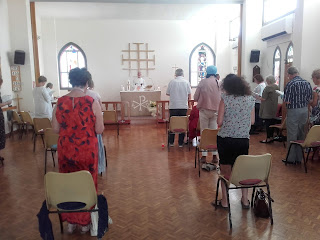 It was a bit strange, but good to be there. Some people decided to continue isolating at home so Richard recorded the service on a webcam and it went out later. A few people sat outside, where - thankfully - the temperatures were much milder than the week before.

In the afternoon our friends came over, so I made extra bread and a cake, and we played a game while the children watched a film. Life is beginning to feel much more normal... even if a rather different normality than the one we took for granted until two months ago.

Yesterday, Cyprus reported no new cases of Covid-19.  That's only the second time this has happened since the first cases started appearing in the country, although figures have been low in the past week. It's particularly encouraging six days after the release of the lockdown, when it might have been expected that there would be an increase. Cyprus continues extensive testing of all contacts of known cases as well as frontline people in the community, and teachers and children returning to school.

But we don't know what the future holds. Airlines are still banned until June 9th, other than a few specific chartered repatriation flights.  In June, visitors will be allowed from a small number of countries deemed 'safe'; even then, they will have to have certificates saying that they are virus-free, and there will be extensive measures in place to ensure no transmission of virus if at all possible. It doesn't sound appealing, but some airlines are offering inexpensive flights in the hope of tempting people to a holiday in the sun.

Still, the tourism industry is going to suffer, even if there are tourists from these few countries. The majority of Cyprus's usual visitors are from the UK and Russia, and neither of those countries are anywhere near 'safe' from the point of view of Covid-19. Indeed, several of the new cases in Cyprus in the past couple of weeks have been detected from people repatriating from the UK.

So unless something changes, we will be here in Cyprus all summer.
Posted by Sue at 17:37

During the week you had a hot spell, we had a cold one. Perhaps it was your new air-conditioners that did it :-)