At the end of May I wrote about Summer arriving in Cyprus.  But, thankfully, it was just a temporary heatwave. Longer than typical for the time of year, but by June 1st we were seeing more seasonally normal weather. I had put my jeans and jackets away in our overflow closet and packed up the duvets, so we didn't return to pre-summer mode, although we stopped using the air conditioning.

I'm not entirely sure what happened to June. Perhaps it just seemed short by comparison to the exceptionally long time April and May seemed to take, in different phases of lockdown.  In June life started to feel more-or-less normal, albeit a new variation on the theme. Marks indicating two metre physical distancing are commonplace inside shops, and on the pavement outside. Mask-wearing is expected for shop and restaurant staff (though less and less apparent in shops, as it becomes clearer that the virus is not at large in the community). Hand sanitising is normal going into shops, though nobody enforces it and I sometimes forget.

The anxiety we had at the start of lockdown is gone. I no longer wipe down everything I buy, or worry about other people in the shops. Our friends have been in our home, we've been to theirs, and we don't keep to any kind of distancing. At church services we sit two metres from anyone else, and don't have any physical contact with the other congregation members during the service... then we all hang out and chat in the courtyard afterwards.

Perhaps we're becoming blasé. The only new coronavirus cases in Cyprus in the past couple of weeks have been in people who have travelled, either repatriations or tourists from supposedly 'safe' countries, or their close contacts. Maybe it will become a problem when the island opens up to the UK and other less 'safe' countries, probably at the start of August,. But right now it's pretty safe to be out and about.

So it's a tad ironic that July and August are, for me, months of aestivation. Not that I sleep for two months; it's not exactly the summer equivalent of hibernation.  Wikipedia tells me that aestivation is 'characterised by inactivity and a lowered metabolic rate'. I don't know about the latter, but I'm certainly much less active than I am the rest of the year.

We had to cancel our proposed visit to the UK. We were going to stay at an AirBnB in Scotland with our sons, daughter-in-law and grandchildren for a week, and I was then going to spend time with other relatives, away from the heat and humidity.  But with no flights at all to and from the UK (apart from repatriations) until at least the end of July, we had to cancel.

So I attempted to get ready for the Cyprus summer... as far as that's possible. Towards the end of June, I had a burst of food preparation:  I found crates of avocados and peaches at the local fruit stall, three or four kilograms of each for about a euro per crate.  They were a little squashy, so I lightly stewed most of the peaches: 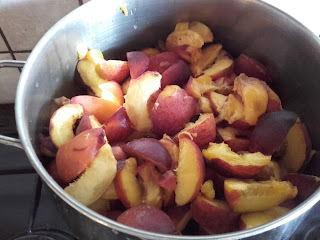 Then froze them in 450g portions, ready to pull out to eat with ice cream when we have visitors: 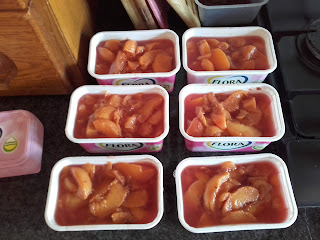 I kept a couple of avocados in the fridge then lightly mashed and froze the insides of all the others for future guacamole: 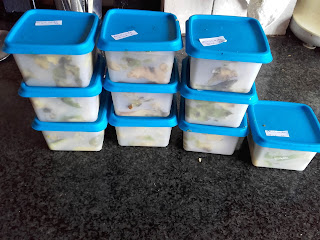 I made a batch of ketchup and another of granola that same weekend, sufficient to last, probably, until the end of July.  I knew I wouldn't feel like much cooking in the hotter weather, so when we went to a supermarket, I bought a bottle of  ketchup and a couple of packs of granola that were on special offer.  They won't be as good as the home made equivalents, but in August I probably won't much care.

I normally cook a hot meal six evenings per week, and Sunday lunchtime. But our oven produces a lot of heat, and even cooking for more than a few minutes over the stovetop is exhausting at this time of year. So we decided, as of July 1st, that we would eat different kinds of salad all summer. Or at least until we get fed up of cold food.  I have a book of different salad recipes that I hadn't really explored, so I went through it thoroughly and made a note of all the ones I plan to try.

So far it has been very easy. Last Wednesday evening I made a chickpea, red pepper and green bean salad (for protein), accompanied by one of our standard favourites: red onions, tomatoes, peaches and fake (vegan) feta, dressed in lemon juice, honey and olive oil.  I microwaved a couple of potatoes to provide a bit of starch. 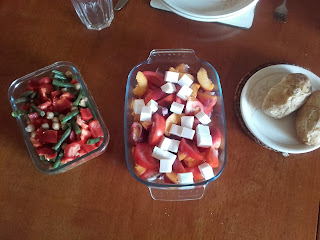 On Thursday I added a basic tuna salad  to the leftovers, and forgot to think about any extra starch/carbs - but we didn't really notice.  On Friday I made a big green salad and some sliced tomatoes with fresh basil to take to our friends' house, where they are still cooking hot food.  On Saturday Richard and some friends sailed all day, so I ate salad leftovers.

For Sunday lunch Richard went to a takeaway place around the corner that does roast chicken, lightly roasted potatoes and salad for just 13.60 euros. That might sound like a lot for one takeaway lunch, but it was a huge amount of food: 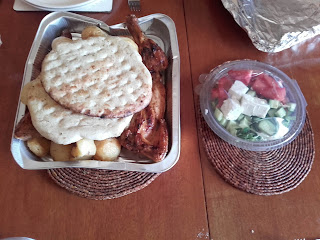 Although the salad was only enough for one meal, the chicken and potatoes will be plenty for two of us for at least four meals.  We froze the two pittas that were also included.  On Monday night we ate out at a taverna with the reading group I joined earlier in the year. Last night we ate cold leftover chicken, fried onions with leftover potatoes, green salad left from Friday, and a broccoli/leek salad from my book. Tonight I will repeat the fried potatoes, and make a new salad with lettuce and mango, in a yogurt/curry paste dressing.

Which is more than enough about food.

As for the aestivation schedule, such as it is: I usually wake between 5.30am and 6.00am, when the weather is cooler (around 23-25C, usually). I stopped going for 5km walks with my friend almost at the end of June, when the humidity started.  I'm trying to do a short 2km walk locally most mornings, though I've felt too tired or it's been too humid a couple of times. I water all our plants three times a week, and on a couple of days I take my shopping trolley to the fruitaria to buy more fruit and whatever vegetables we're going to need for the salads.

Then I sit on the garden swing, and read, and think, and pray... and usually go inside around 7.15am when the sun starts to hit the swing and the temperatures increase.  I feed the cats, and squeeze orange juice, and have breakfast, then take Richard's to him. I have a frappe, and read, and think about the day, then we usually spend anything from five minutes to half an hour or more together, before he starts work and I shower and turn on my study air conditioning.

Then I spend most of the time between about 10.00am and 6.00pm in my study, reading, or writing, or working on a blog or website, or doing something else online.  I emerge for meals and other random things, but always return to cool down.

I do laundry usually three times per week, and aim to clean the whole house on Saturday mornings, though that doesn't always happen. Last Saturday I turned on air conditioning in several rooms which made it possible to clean them, although it was still quite tiring.  I've made dairy-free ice cream a couple of times, although with the ambient temperature so high the churn doesn't do much to freeze the ice cream, even when I put it inside a cool bag with ice packs: 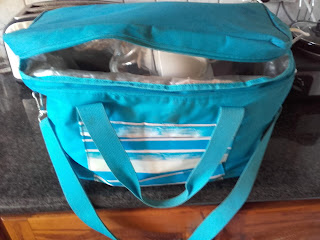 Still, the taste is good even if it has to be thawed and then sliced rather than scooped.

It's not as hot as it was at the end of May, so my forays into the rest of the house aren't too unpleasant, and so far the humidity is mostly bearable.

In the evenings, we play games with friends usually twice a week, we watch a film once a week, and an episode of something like Doctor Who once a week. We go to our friends' house, usually, once a week.  And on the other evenings Richard often works, and I read.  Until the end of June we were going out for walks two or three evenings per week, but it's too hot for that now.

So the first week of aestivation has passed.  If lockdown had happened in July, I would hardly have noticed any difference.