July passed, a day at a time, rather more quickly than I had anticipated. It was apparently the hottest July in Cyprus for nearly four decades. I was very thankful for our new, more efficient air conditioning units. We also bought a new fridge-freezer towards the end of May.  These were justified to some degree by our recent electricity bill. Despite using more air conditioning than we did last year, we used just over half the number of units.
As I said in my last post, we should have flown to Scotland towards the end of the first week of July.  We were planning to celebrate our fortieth wedding anniversary with our sons, daughter-in-law and grandchildren at an AirBnB in St Andrews, the town where my family went on holiday every year when I was growing up. I was then going to stay with various relatives and stay out of Cyprus as long as possible during the heat and humidity of Summer.
But the pandemic crisis ensured that didn't happen. We determined to celebrate next year, if at all possible, but in the event we had a very pleasant day.  It started the day before with a lovely basket of flowers sent by my sister: 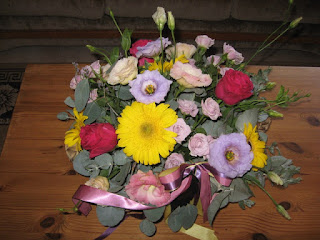 Then on the day itself, several people at church congratulated us. Then we were surprised and delighted with a special cake afterwards (albeit with a minor spelling error - not unusual in Cyprus!) to share in the courtyard after the service: 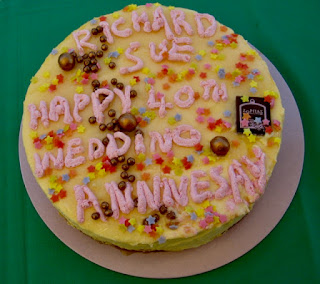 We went out for lunch to our old standby Alexander's, as we could park not too far away.  In the afternoon our closest friends in Cyprus were coming over anyway. So in addition to thawing some more apricots and making some more ice cream, I made some tiffin [chocolate biscuit cake], to my grandmother's recipe, since I'm avoiding using the oven during the summer. 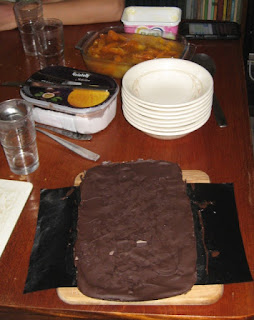 We were given two anniversary cards on the day itself, and two more arrived in the post a week later. 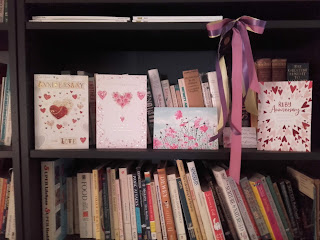 For a non-celebration, it was very enjoyable. Forty years feels like both a long time, and almost no time at all. Will we still be around in another forty...?  It's not impossible.
Other than that, life has continued in aestivation mode. I've been for a few very short local walks, not even reaching 5,000 steps most days. I've watered the plants and looked after the house, and made a lot of salads. It's been interesting experimenting with different ingredients and combinations for salads, and we haven't yet become bored with cold food.
Not that it's been entirely cold food. We had been talking about buying an air fryer for some time, having read some enthusiastic reviews. These aren't just a healthy version of a deep fat fryer, but can roast or bake smallish quantities of food too. For just two of us, it sounded ideal.
We hadn't actually decided on anything, though I was looking at one from Lakeland in the UK.  Then we were in SuperHome Centre looking for something else, and saw that they were selling air fryers. I wanted to know what they looked like out of the box, and a very helpful assistant (masked, of course) showed us in some detail.
The price was good. And it was ready to take home. And it was a reputable brand, with a two-year warranty - much easier to take back, if necessary, than one ordered from the UK.
So this was our anniversary present to each other: 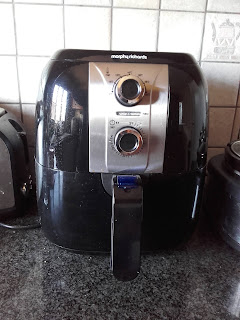 I was a little anxious about using it at first, but tried it for re-frying potatoes in slices, and it was excellent.  I've made sweet potato fries in it, and baked potatoes. It's excellent for cooking frozen oven chips.  I've roasted a chicken breast to slice in a curried chicken, mango and cucumber salad, and yesterday cooked a small salmon fillet to flake for a lentil, pepper and salmon salad.  I've roasted peppers and even onions in the air fryer.  It doesn't heat up the kitchen like the oven does, and it's a great deal more efficient to use for just one or two items for two people.
As for the salads... I've had to cook some ingredients over the hob, but again that's not really a problem. I've made - for instance - tomato/peach/fake feta salad, broccoli/leek/egg salad and avocado/mango/cashew salad.  We bought 500g farfalle pasta, something I wouldn't normally do as we eat very little pasta. A 500g pack of spaghetti usually lasts us around five months. But it's excellent in different salads to provide some carbs; 100g farfalle (cooked) gives us enough for two days' worth of salads. I made one with mushrooms, one with pesto and cherry tomatoes, and another which I've already forgotten.  Most days I make one new salad, and team it with at least one from the previous day, plus perhaps some extra lettuce or coleslaw or chopped cucumber.
That's it for July, really.
At least, it was until almost the end of the month, when the Cyprus numbers for Covid-19 positive tests suddenly went up from 0-3 per day to 10, then 13, then 25... big numbers, percentage-wise, for a small island.
We breathed a sigh of relief when the numbers dropped to 5 over the weekend, but yesterday was another higher number.  Today they have just reported 15 cases.  Here's how the graph looks on the Worldometer site: 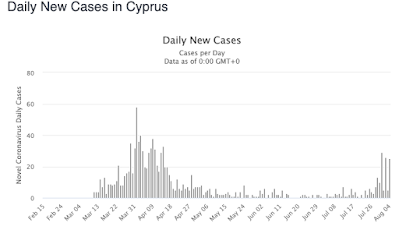 It resembles what some countries are calling a second wave, although most of the cases are in Limassol and are being tracked with all contacts traced and tested.  Some are from airport tests of repatriations, too, not all of whom are self-isolating even when they come from 'high risk' countries.  But a few are appearing 'in the wild', which suggests that Cyprus hasn't eliminated the virus at all.
So as of last weekend, we must wear masks in all public indoor crowded spaces. They have spelled out what that means; the ones relevant to us are shops, banks, and churches. It refers to children over the age of six as well as adults. Limassol has had some extra restrictions and closures.
I find masks unpleasant to wear, particularly in the heat and humidity. For ten minutes or so in a shop it's not a problem. For an hour in a church service last week, I found it increasingly difficult to breathe in properly and began to feel faint with the heat of my breath inside the mask. I will try sitting outside in the courtyard this coming Sunday, so long as we don't have another heatwave. And, of course, the church service will only happen if we're not back in lockdown mode....
Every time we see our friends, now, we wonder if it will be the last time for a while. The government had said there would be another lockdown if the cases rise too much. So far the experts seem to think it's under control, and that if everyone wears masks in public indoor spaces, it should gradually ease off again. But we're not taking that for granted.
We also know how well off we are in this country. It might be hot and humid but we have inexpensive and efficient air conditioning, with electricity that works all the time (barring very occasional power cuts).  There's plenty of food in the shops, it's safe to go out and about, albeit with masks on, and we have reliable, fast Internet. Cases of Covid-19 are rising, but they're mostly affecting younger people now so many are asymptomatic. Only four people are in hospital with it, none of them in Intensive Care.
We have friends in Lebanon where there seems to be crisis after crisis. They aren't doing too well with Covid-19 either, and the whole country has been in financial chaos for weeks, getting increasingly worse.  Their electricity is off more than it's on.  Yesterday we heard - and felt - a loud bang which we quickly learned was from a huge explosion in Beirut, leaving devastation, serious injuries and over 100 people killed.
Posted by Sue at 19:31

Hi, I'm sure I must have read your blog many years ago but I've been slacking on the blog front (both reading others and writing my own). I will make sure I catch up with some of your posts as it's great to 'know' another Cyprus blogger.

I feel for you regarding wearing a mask, especially in church. In much-cooler-than-Cyprus Scotland, I'm struggling to breathe by the end of the Gospel reading.