I knew it was optimistic when I wrote, at the start of August, that we should be half-way through Summer. Cyprus Summers don't finish at the end of August. I knew it would still be hot at the start of September. What I didn't expect was another heatwave, temperatures up to 37 degrees in the shade (over 40 in Nicosia), and humidity worse than it was in July or August.

It's been a strange year, and an unusual summer. Usually our younger son comes out for at least ten days or so. But with cancelled flights and the need for Covid testing, not to mention the way the Cyprus 'categories' changed almost by the day, it didn't make sense this year.  Two weeks of self-isolation is not so bad for someone arriving for a month or more. But it would be terrible for a short visit.

We didn't leave the island, either, and don't expect we will until at least the spring. The pandemic is not over.  Numbers remain low in Cyprus, and we have a lot more freedom than many countries; but it could come back any time. Much of Europe is seeing a spike, possibly a second wave. Treatment for the worst cases is improving, and, at least in Europe, fewer people are dying. But until there's a reliable vaccine or a breakthrough in curing the disease, any travelling is going to be risky.

We didn't go to the beach this year, either. I think that's a first. In previous years we've gone on Friday evenings with our friends, and we've often gone there on other evenings, too, for a brief swim. But this year everything is different. We didn't want to risk a crowded beach, early in the summer, and somehow we never got around to it. The days passed slowly, but the weeks whizzed by. I could have gone to a friend's daughter's birthday party on a beach ten days ago, but the predicted temperature was about 35C and we had no idea if there would be any shade. So I didn't.

I haven't used the oven since the end of June. I thought I might when September started, but it's remained too hot and sticky. We managed to eat salads in some form, albeit sometimes accompanied by hot potato wedges or slices, until the end of August. Since then we've had some cold food, some hot, but made in the air fryer or over the stove top, or a combination of the two.

Having said that, I've experimented a few times - with the kitchen air conditioning on - with different foods. I've been particularly pleased with some dairy-free vanilla ice cream, based on a recipe I found somewhere else, involving (among other things) a can of full-fat coconut milk and some whipped aquafaba. Gold syrup gives an almost caramel flavour, and canned coconut milk whips pretty well, after the more watery part is removed (and made into a custard to combine, when cold). 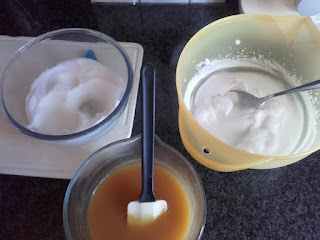 I tried a couple of other recipes, but although I'm not, in general, a huge fan of vanilla ice cream, I did very much like this one. 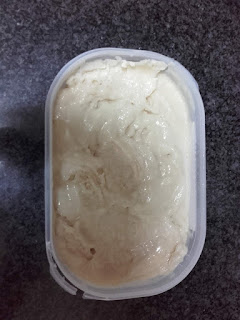 I made 'fake feta' a couple of times, too, after realising that the 'fasting' (dairy-free) version available here is a bit tasteless. Here is the recipe I used (approximately): https://honestcooking.com/baked-almond-feta/
Cooking in the air fryer worked well, and was much more efficient than using the oven. 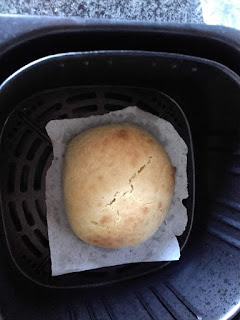 But on the whole I kept cooking to a minimum; we had plenty of leftover curry portions in the freezer to reheat and eat with salad and pittas for our Saturday night curry nights, which has been a 'tradition' in our household for many years.
And so to September. It's the middle of the month already, and although I've been for short walks around the neighbourhood first thing, just to get a small amount of exercise, I haven't yet resumed walking along the Salt Lake trail. We thought about it for this week, but the humidity is about 85% at 6.00am. Some mornings I'm absolutely dripping after just twenty minutes or so walking locally, in sandals. It would be much worse in socks and trainers - and I would not want to walk along the rough ground that leads to the trail in sandals.
I was uploading photos to Facebook earlier and realised that, for the first time in probably fifteen years (since we had our first digital camera) I have only taken two photographs this month. So far, anyway.  One is of our large white cat Alex, who really doesn't like the heat at all: 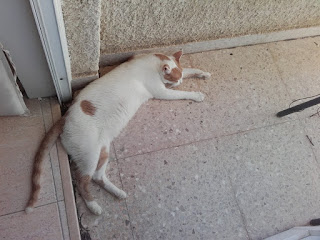 The other is of Lady Jane, our small grey cat. She, in contrast to her brother, seems to thrive in the heat. She objects when we turn on air conditioning, and doesn't even like ceiling fans very much.
On the other hand, she has an odd affinity for shoes... 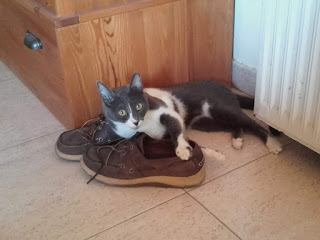 I'm still checking the pandemic statistics regularly, though not as obsessively as I was a few months ago. I'm checking the weather more often than usual, too, in the hope that we'll see some rain, or at least a hint that autumn might be coming. It does look as if the heatwave has passed, thankfully, but it's still warner than I like. Still, the 'low' temperatures are better than they were, and if the humidity drops the early mornings should be quite pleasant by the end of the month. 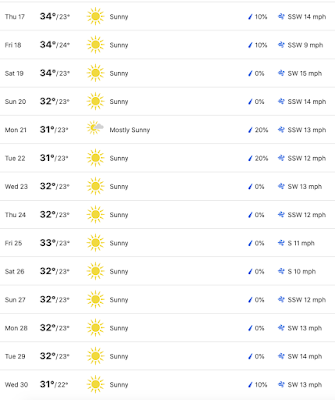 Keeping you in our prayers