I am not very good with large or sharp knives. I say this not to be self-deprecating, but in the interests of complete honesty. I am the only person I know - perhaps the only person in the world - who was banned from using sharp knives, not by my parents, but by my sons when they were perhaps eight and ten. Even at that age, they were both considerably more competent with knives than I was. They hated seeing me with a large blood-soaked plaster around a finger. I can't say I liked it much myself.

However, although others cut home-made bread and cakes for me, I'm the one who does most of the cooking. So I have to chop a lot of vegetables, and a gentle, serrated edged knife isn't much good for onions, or carrots, or sweet potatoes. Some years ago we bought a small, sharp vegetable knife which I have used extensively, and I don't think I've ever cut myself on it. It's easier to control, being small, so the handle fits into my hand nicely. 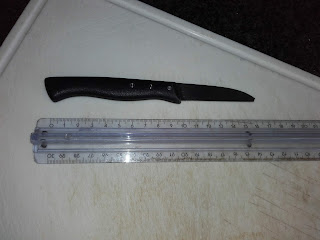 I have shown it next to a ruler for reasons which should become clearer later in this post. In case you can't easily enlarge the photo, the whole thing is just 15cm long. (That's around six inches to those who still think in imperial terms.)

Although I've returned to cooking hot evening meals and using the oven again, after the summer, I haven't really got back to my monthly schedule/menu, so am somewhat improvising what we eat. And yesterday afternoon I remembered that I had bought some special-offer tortillas a week or two back. So I decided we'd eat fajitas. And yes, I know that technically 'fajitas' should contain little strips of meat, but I make vegetarian ones, with black beans as the protein part.

So I removed from the freezer some previously cooked black beans, and also a mashed avocado (from a euro crate of avocados I'd bought a few months ago) to make guacamole.

Around six o'clock in the evening, I chopped a large onion, using my little knife, chopped and added garlic, chopped mushrooms and peppers, and was cooking them with the black beans and the relevant spices in a large frying pan. 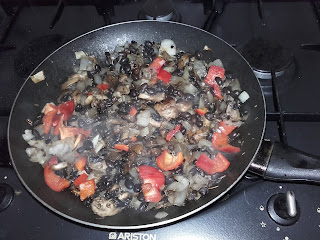 Then I checked the avocado. I found it wasn't quite thawed, so I microwaved it for a  minute on 'thaw', and proceeded to make the guacamole.

It was as I was chopping a tomato to add to the guacamole that I became aware that something felt different. The knife was almost cutting more easily - it wasn't catching on the chopping board as it can sometimes do with tomatoes. Puzzled, I looked at it carefully: 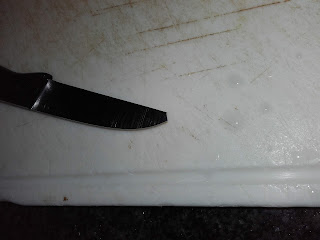 The point of the knife was not there. I assumed it must have snapped off somewhere. I looked about for it, to no avail. It would have been quite small - that's why I posted the photo of the knife next to a ruler, to show the scale. With dawning horror, I realised that, as it probably happened while I was chopping the vegetables, and wasn't on the chopping board, it must be somewhere in the cooking food.

I turned off the gas, and used a large fish slice to turn over the contents of the frying pan carefully, but I couldn't find anything. It didn't help that I'd added cumin seeds, and that everything was well-stirred, with the black beans turning it all rather dark coloured. I tipped it into a different pan, piece by piece, but that didn't help either.

I tested the knife with a fridge magnet to see if it was magnetic, and it was.  Apparently some stainless steel is magnetic, some is not, but this one definitely stuck to the magnet. I went to ask Richard if we had a strong magnet in the house, but he said that we don't. I had thought that perhaps a strong enough magnet might cause the rogue point of the knife to jump out of the meal, rendering it safe to eat.

He then checked it all carefully too, but there was no sign of any tiny piece of metal. And it would have been so small that, if we had gone ahead and eaten the food, one of us might easily have swallowed it. The thought of a tiny sharp triangle of metal making its way through my gut - or his - was enough to make us both shudder.

So although we really, really don't like wasting food, and eat (or freeze) all leftovers, we knew we couldn't risk it.  I felt quite guilty about throwing it away, particularly as we didn't know for certain that the knife blade was somewhere in it. It wasn't the cost - probably no more than about a euro in all - but the thought that so many people go hungry, while I - after wondering what to do - remembered that I still had plenty of onions and peppers, and had only used half the mushrooms I had in the fridge. So I could easily make the same again. We even had a can of black beans in the cupboard, which we'd bought for emergencies. This, I decided, was a good example of an emergency.

Fifteen minutes later, I had prepared another basic black bean fajita filling in another pan, and set it out on the table along with chopped salad vegetables, the shop-bought tortillas, and the guacamole.

Then I panicked about that, remembering that the avocado hadn't been quite thawed when I wanted to use it.  But I could not recall whether I poked at it with a fork, or with the little knife which I had been using.  Richard commented that poking something partly frozen could well have caused a weakened blade to snap.

So, very reluctantly, we decided that we had to throw out the guacamole too. And there was no time to make any more.

It would have been irritating if I had found the snapped off blade later, when cleaning the work surfaces after tidying the kitchen, but I didn't. So, despite my guilty feelings, I'm sure it was the right decision to throw out the food that probably contained it.

Oh my, what a conundrum. I'm sorry you had to throw put so much food, but glad you made that decision. It would have been horrific if the missing knife tip had ended up inside of one of you.
Knives are easily replaced, not so you two.
Take care. 💗