It's only a week since I wrote about some new restrictions in Cyprus, until the end of the month.  The only one that affected me was that shops would only serve those who were vulnerable and/or over 65 from opening time until 9.00am. And that masks are required outside as well as in public places, other than when exercising, or in quiet street with nobody else around.

Sadly, it hasn't made any difference to the number of new cases being diagnosed daily. Here's the Worldometer graph that's now showing: 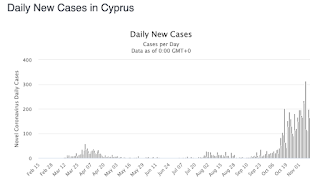 There was a shocking peak of over 300 one day last week, although thankfully that has not been repeated. But the numbers in hospitals are high, and yesterday four more people died. The hospitals are not able to cope with many more admissions; this is a small country. So on Monday the epidemiologists and other advisors met, and last night there was a meeting to determine exactly what new restrictions would be in place.
We were more-or-less prepared for another lockdown, although we didn't expect it to be as strict as the one that started at the end of March. More is known about the virus, and it was fairly certain that schools would not close. I didn't expect to go back to the SMS system of needing authorisation to leave the house, either.
So last night, around 8.30, I kept checking the various local news sites. I was most hopeful about Kathemerini, a Greek site which seems to get the news more quickly than any of the others. And, indeed, it did. It gave a live stream of the Cypriot President giving a speech asking people to follow the new regulations, and then one of the Health Minister explaining what the new rules are. The Greek was much too rapid for me to understand more than about one word in five, but text was being updated every minute or so as he spoke, and I right-clicked 'Translate to English' to find out what we would be facing.
It turns out that, other than for folk in Limassol and Paphos, not a great deal has changed. The measures from a week ago are still in place, and will remain so until the end of the month. There are some additional rules: no visits to nursing homes or other high-risk areas; the shopping time for the vulnerable and over-65s is extended by an hour. But we can still meet in private homes or outside in groups of up to ten people, which is the most significant thing for us at present.
However, as the article (and others linked below) points out, Limassol and Paphos have had around 70% of the new cases in the past couple of weeks (compared to 28% in the Spring), and have also had around 70% of hospital admissions currently.  Seven out of eight of the people who have died with Coronavirus in the past week are residents of either Limassol or Paphos. So there are gong to be much stricter measures in those two districts, starting today.
For one thing, movement is going to be restricted, to ensure that nobody can get in or out of Limassol or Paphos, other than for essential work (health care, mainly) or going to/from an airport. For another, they are having a full curfew from 8pm to 5am (it's 11pm to 5am in the rest of Cyprus).
Also the universities and lycaeums (schools for age 15-18) in Limassol and Paphos are closing, with online learning only, and various activities are cancelled.  Many businesses are closed too. Shopping malls are shut, and outside groups of more than two are not allowed. However, surprisingly, up to ten people at a time are still allowed to meet in homes in those towns too.
I was mildly amused at the auto-translation of the notification that churches are closed in Limassol and Paphos:

"Ecclesiastical and other forms of religious worship in religious places are performed without the presence of believers."

Today there was a summary (in English) on the Cyprus Mail website although I don't think it's particularly helpful to use the word 'Draconian' in the description of the not-quite-lockdown for Limassol and Paphos. It is, after all, nowhere near as severe as the restrictions during April.

However the best place to look for all the details is the press release on the PIO site.  I checked, out of interest, and the phrase about church services in Limassol and Paphos states:

"Church services and other forms of religious worship in religious places take place without a congregation present."

Which is how we had understood the odd auto-translation above. While this still sounds a bit strange to those of us of Protestant backgrounds, it's important, as I understand it, for the Greek Orthodox priests to say/sing their liturgy in their church buildings on Sundays and other special occasions, but it doesn't matter so much whether anyone else is there. The Protestant churches will have to return to live-streaming, probably from their homes. Or maybe from their church buildings, if they are able to do so without any congregation present.

So Cyprus has essentially introduced a 'tier' system, a little like those which the UK and various other countries have adopted, although it hasn't been officially described as such. But I assume that, if cases start to get worse in Larnaka, we too are likely to have these stricter measures implemented.

We just hope and pray that numbers will reduce, here and elsewhere, and that the hospitals will cope. There are more effective treatments now available, as the virus is better understood, but all over Europe and the United States people are still dying, more than did back in the spring when some of the treatment was guesswork.