Richard went to the PO Box this morning, and retrieved four parcels - all of them for me.

Each parcel contained one book. I ordered them nearly a month ago from the excellent Awesome Books site. The prices on that site are usually better than those on Amazon UK, with the huge advantage that there's a fixed postage cost of £2.99 per order, throughout Europe and most of the world. (Postage within the UK is free).
But perhaps more importantly, Awesome Books claims to be the 'no 1 ethical retailer' for books, as well as CDs and DVDs. They donate books to schools all over the world, and they also rescue books from being thrown away. Not that they're poor quality. They sell new books as well as lightly-used second-hand books and the ones they call 'bargain bin' quality: but even those are in good condition. If I can buy something in the bargain bin, I do so.
Those familiar with my preferred reading genres might be a tad surprised to see what was in these four parcels: 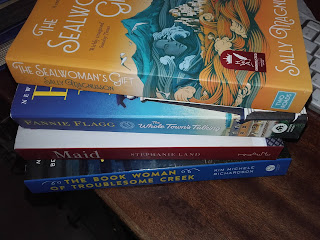 They are not the gentle pastel covers of modern character-based novels about families and relationships, which are my favourite reads. Other than the one by Fannie Flagg, they are not by authors I have ever read before. They weren't even recommended to me via Amazon, based on my wishlist and previous purchases.
Instead, they are the books for the first four months of 2021 which will be discussed by the reading group I joined nearly a year ago. One was new, and three were second-hand. They are all, as far as I can tell, in perfect condition.
I suppose it's rather strange that, in five-and-a-half decades of being an avid reader, I have never before belonged to a reading group. I had heard about them - I was even invited to one, about ten years ago - but they always seemed to me to read a selection of books that did not appeal to me at all.
But two things came together at the start of this year. Firstly, I decided that it would be a good idea to expand the genres of books I read. I was experimenting with one or two different authors, and had even read a couple of literary fiction books which I thoroughly enjoyed. But I didn't really know how to go about finding suitable books, other than by trial and error. And I wanted to continue reading new books by my favourite authors, as well as re-reading some which I hadn't read for a decade or so.
Then, looking at books at the St Helena's monthly book sale at the end of February, I was chatting to one of the helpers, and saw a book I had very much liked, though I hadn't expected to. 'Oh, yes,' she said, 'We liked that in the reading group, too.'
'Reading group?' I queried.
I then learned that there was a local reading group which met once a month, and discussed the book they had agreed to read. And one of the aims of the group was to encourage people to read books they would not otherwise read. I would be very welcome, I was told, and the lady took my email address so she could send me the 2020 list.
It was serendipity. Or perhaps synchronicity. Or, as I prefer to think of it, a gentle divine prompting to try something new.
The list was a little daunting; I had never heard of any of the books, and some of them didn't sound very interesting. But I went to the Awesome Books site, where I found two of them inexpensively second-hand, and one in the bargain bin. I also found another book I had been looking for in the bargain bin, so I made my order immediately.  I found a couple of others on Amazon, in the Marketplace, and ordered those too. And I put the rest on my wishlist. Generous family members bought them for me for my birthday a couple of months later.
None of the books had arrived by the first meeting, early in March, so I had only read the 'sample' section of that month's book, downloaded to my Kindle. Yes, I could have bought the entire book for my Kindle, but I prefer to read real books if at all possible. I read a summary online, too, and some reviews. I eventually read the book - 'All We Shall Know' by Donal Ryan - in the summer. I can't say I particularly liked it, but it was well-written and interesting enough that I kept reading.
By April, Cyprus was in lockdown. The group could not meet. I read the recommended book for April anyway, and was glad I did so, despite not being able to discuss it with anyone. I then started the recommended book for May, but found it a bit heavy-going and repetitive; I still dip into it occasionally - it's a kind of memoir rather than fiction - and if we ever do discuss it, I'll make the effort to finish it. But I didn't at all mind that the group was still unable to meet in May.
In June we were once again able to meet as a group, albeit in a larger room with chairs set over a metre apart from each other, and hand sanitiser on the way in. And since then we've met and discussed books every month other than August, when it would have been too hot and humid, and everyone needed a break. My favourite book so far from the reading group selection is 'The Beekeeper of Aleppo', which was this month's choice.
I have loved being part of this small, friendly group, and have thoroughly enjoyed discussing the books we have read, some of which have been excellent. They try to introduce books from a variety of cultures and genres, some light-hearted, some heavier; some fairly short, some quite long, most of them highly reviewed.
And so, when the list for 2021 was agreed, I went straight to the Awesome Books site, and ordered the first four, putting the others on my Amazon wishlist.
I was delighted to see the books which arrived today, although it seems that my unread-books piles are growing rather than shrinking: 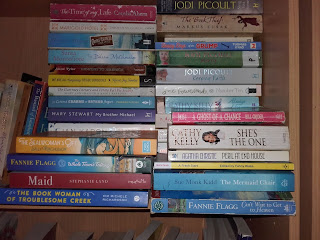 And this despite my reading three new-to-me books every month, in addition to re-reading six or seven favourites.
I suppose I could stop buying books at the St Helena's monthly sales... but there's something very reassuring about having a good number of books still to be read. I would hate to get to the end of the pile.
Posted by Sue at 16:53

I know exactly what you mean about that to be read pile! I have never heard of the beekeeper of aleppo. I usually read the classics. Thanks for sharing.

I had never heard of Awesome Books, will try them soon. Most interesting post.