Autumn didn't arrive until early November this year, after a much warmer than usual October.  But it's still here, two weeks later. It's usually a very short season in Cyprus, sometimes vanishing before we really notice it. By the middle of November we're normally wanting to wear sweaters, at least in the evening, and are thinking about putting the heating on.

Instead, I'm comfortable in jeans and a tee-shirt, and we've been using just our lightweight duvet for the last couple of weeks, with no need to move to the thicker one.

So here are a few images from the middle of November.  Autumn fruit: 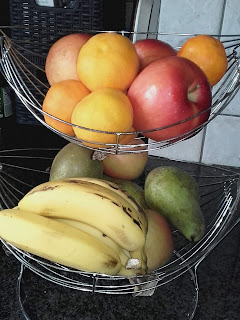 Clementines are now in season (locally grown) and crisp 'Pink Lady' apples, which have all too short a season. Cyprus-grown bananas have been back for some weeks now, and the conference pears are at their best. I miss the summer fruits - peaches, apricots and strawberries, in particular - but I like the way we mostly eat seasonally here, with locally grown produce as much as possible.

Here's our side yard, with gently fallen leaves: 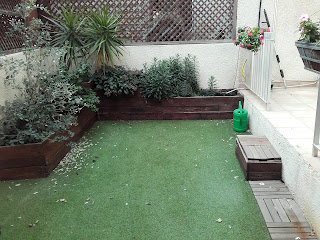 Lady Jane has been sleeping in the cat bed again, rather than sprawled on top of a bookcase: 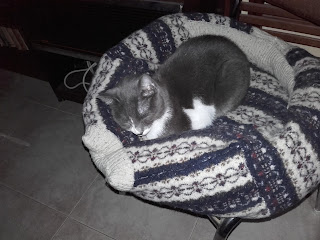 And finally, an Autumn sunset, shortly before 5.00pm: 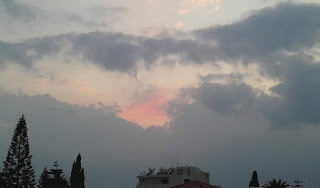