Every other Sunday we have friends over for games, followed by a shared meal. I usually prepare a couple of loaves of bread, a dessert of some kind, and (during the non-summer months) some soup. But on the in-between Sundays, of which today is one, I try to have a day when I don't do anything much.

So I thought that, today, I would go to the St Helena's church service in the morning, and later I might finish the novel I'm reading. I knew I had to make some cashew milk at some point, but that takes a couple of minutes; the cashews have been soaking in the fridge since Friday.

Now that it's cooler, I decided I would walk to St Helena's. Since Richard sets up the live-streaming, I've been going with him, which means leaving the house shortly after 8.30am. That's not early, for me, but I like to have some of our lunch prepared in advance, after having breakfast, and then take a shower. As it wasn't sunny this morning, the solar heating hadn't done much so I had to put the water heater on for twenty minutes. But I didn't have to rush since I had an extra half-hour, in which I par-boiled potatoes, took a previously-made couple of portions of a chicken dish out of the freezer, and had my shower.

As I was about to leave the house, shortly after 9.00am, it started to rain. It wasn't particularly heavy, but I found my waterproof coat, and an umbrella, and actually very much enjoyed my walk in the rain. I'm thankful I arrived when I did, as it got rather heavier within the next hour. There are reports of extensive hail in some parts of Larnaka. I wouldn't like to have been caught in that.

I like the peacefulness of an Anglican service, and am getting used to chairs being spread out to allow two metres between each person or couple. I still don't like having to wear a mask the whole time, but it's not so bad now the weather is cooler. Up to 22 congregation are allowed under the current regulations (3 square metres per person), as the building isn't all that big, and there has been an outside group up to now. But today the rain put some folk off coming to the service, which is just as well as nobody could sit outside, given the weather. 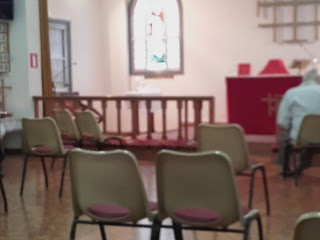 There was a bit of drama in the service when one of the clergy felt faint, but thankfully he was fine later on.
When we got home, we saw that with the torrential rain the roof over our stairs had leaked, and there was a considerable amount of water on the floor in the living room. Just as well we don't have carpets. So I got out the mop, and got rid of most of the water.
I did then read for half an hour, but at noon I had to give the cats their wet food, and put the oven on for roasting the potatoes.
At that point I remembered that I was running low on granola, so decided I might as well make some - it's not difficult, and it's quite convenient to toast the oats and walnuts at the same time as cooking the  potatoes, turning the oven down after twenty minutes or so to roast carrots, and re-heat the main dish, and to continue cooking the granola. Then after adding the dried fruit, I leave it in the oven (as it cools down) for the rest of the afternoon. 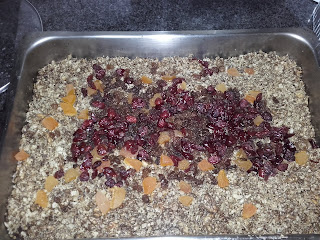 This is the recipe I used to use for granola, adapted from one given by a friend many years ago.  Nowadays I don't add buckwheat flour, or any grain other than the oats; instead I use chia seeds as well as the other kinds of seed. And I always add some dried cranberries.
When I opened the fridge to get the carrots and broccoli, I saw a bag filled with tomatoes, which I'd bought at the local fruit stall for a couple of euros on Friday. My plan had been to make some more tomato ketchup, as we'd run out of that too. But I hadn't done it on Friday, nor on Saturday... I decided I might as well do it today. The tomatoes all looked good, but there's no guarantee that they'd last many more days.
So I washed them and chopped them, and added onions and spices etc, and put them on to stew gently to soften, then continued preparing lunch.
Just before we sat down to eat, my older son sent a Whatsapp message asking if I'd like to video chat, so I suggested an hour or so later.  We usually have a leisurely lunch on Sundays; it's the only day when I cook at lunch-time rather than in the evening, and Richard usually makes a chocolate mug cake to follow.  By the time we'd finished, and cleared up somewhat, and put the dishwasher on, it was almost two o'clock.  So I turned the computer on and sat down with my coffee, and attempted a video call; the quality wasn't good, so we decided to try again later.
But having sat down at the computer, I checked news sites, and played my Lexulous games that were waiting for me to make a move. I answered a few questions on a forum, and checked Facebook, and followed some links... and about an hour later had a very enjoyable (and much better quality) video chat with my son, daughter-in-law, and two wonderful grandchildren. 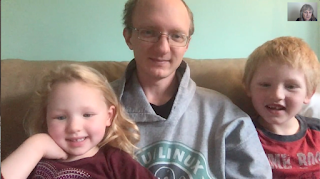 I miss them so much! Still, Facetime allows us to keep in touch, and I usually read a couple of stories to the children. Only picture books - I have to hold them up to the webcam, and read with my head slightly twisted round, so I don't usually read more than two. Just seeing them in their house, talking to them about their week, leave me feeling refreshed, with what a friend, years ago, used to call warm fuzzy feelings.
Then I continued browsing, and reading online for another hour. At that point I remembered that I needed to blend the tomatoes etc for the ketchup, add the remaining ingredients, and simmer a while longer to reduce it to the right thickness. I have an excellent stick blender which I was given ten years ago. 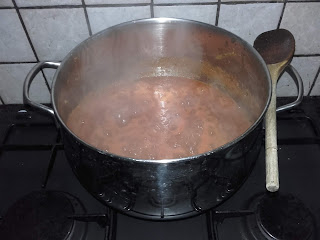 The simmering doesn't take all that long, and I knew that if I went back to the computer I might lose track of time. So I emptied the dishwasher, and then remembered that I need to make the cashew milk.  Now that we've stopped drinking frappes, I only have to make this about once a week. I have a Lidl blender which works well, so long as I tighten it sufficiently: 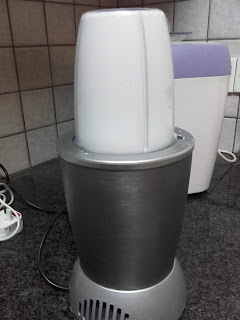 While it's blending, I put a litre of coconut milk in a large jug.  There's always a lot of coconut cream stuck in the packet, so I add extra water and shake it up, and usually end up adding another half litre of water - which makes a good consistency to add to coffee.
I used to make my own coconut milk out of desiccated coconut, but it was quite a hassle, and sometimes very watery. So we now buy Koko brand coconut milk, which is reasonably inexpensive and readily available, and it has the added bonus of a few extra vitamins. 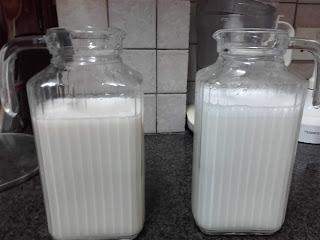 After those were in the fridge, and I'd turned off the simmering ketchup, I sat down at my computer again to update the St Helena's website with this week's bulletin, and other information. And then realised it was time for another blog post...
Just before I finished, Richard made us a light supper. As he's doing some work this evening I shall now turn off the computer and might even finish the novel I have been reading.
Posted by Sue at 20:07