Lady Jane Grey, our smaller cat, has lived with us for over four years now. She moved into our household when our younger son Tim moved back to the UK, and although it took her a few weeks to adjust - and maybe a year to be fully integrated, she and Alexander the Great are now good buddies - typical siblings, in fact. Sometimes getting alone well, sometimes looking out for each other, sometimes play-fighting and scampering all over the house.

But despite being originally from the same litter, they are very different in personality. Alex is placid, on the whole, quite demanding when he wants attention, and generally interested in people. Alex goes outside when he wants to during the daytime, although we keep him in at night. But, as with most cats, he spends a lot of his time asleep, oblivious to his surroundings.

Jane is a lot more skittish. She's around half Alex's weight, and an excellent jumper. She is quite picky about who she gives her affection to; it's taken her four years to accept Richard properly, although she does now settle on him sometimes. She's nervous of visitors, other than those she has known for years, and she's terrified of workmen of any kind.  She sleeps, but usually remains very alert.

Jane doesn't go out at all; two years living in a flat, with nowhere to go outside, means that she hasn't developed any road sense. And the few times she has managed to get out, she's been terrified; so much so that she's mostly entirely happy to stay inside.

However, that means that her diet is limited to the cat food we give her: wet food at lunchtime, dry food available all day. The first time we wondered whether she needed something extra was three-and-a-half years ago, when she started nibbling bits out of a bouquet I had been given. We don't often have flowers, but the same thing has happened any time I'm given any - she sniffs around carefully, then finds something which takes her fancy, and starts chewing. 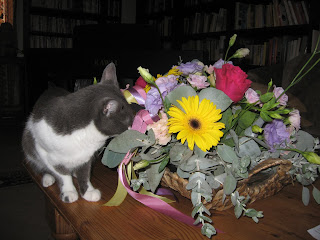 Around the time this happened in the summer, I discovered that it was possible to buy grass seeds specially intended for cats. The grass grows quickly, and provides a few extra vitamins and minerals.  I discovered some on Amazon, and since I was ordering something else anyway, I added a pack of seeds to the order.
I planted some of them in a little pot, as directed, and within about five days they had grown to a height of around five or six centimetres.  I put them on the table in the living room, wondering if - as is typical for cats - she would entirely ignore them.
But she was immediately drawn to them: 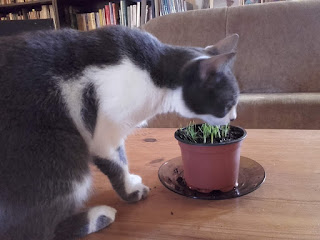 She was so enthusiastic that I wondered if she was going to eat the entire pot's worth of grass. But instead she just gently nibbled the ends, until each stem was at a length of about 2cm: 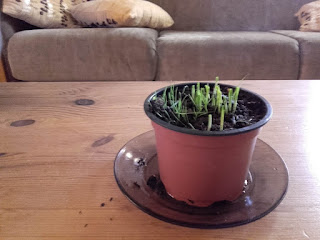 They grew a bit more overnight, and the following morning she repeated the process.  After a couple of days I planted another pot, and when those seeds had grown to a reasonable amount, I started alternating them indoors, so that they had more of a chance to grow. When I open the kitchen doors in the morning, Jane goes and checks her grass, and usually has a quick munch. Then she takes no notice of them for the rest of the day.
Alexander, meanwhile, doesn't even seem to have noticed that they are there. But he's never been interested in bouquets, either.
I don't know if Jane is now feeling fitter and healthier, or if she feels the need of more protein in her diet, to balance the green stuff, but she's started another new habit within the last few months. And we really don't like this one at all.
The one place where she can get outside into the sunshine is a biggish balcony area outside our bedroom, where Richard sits in the morning to eat his breakfast. Tbe cats usually join him, and about six months ago we used an old dust sheet with a ladder that's up there to make them a kind of den or playhouse. And they did play in it, batting each other through the cloth, for the first few weeks.
But it grew hotter, and Alex mostly just flopped when he was outside, rather than joining in with anything. Jane, who likes the weather to be very hot (she refuses to stay in a room with air conditioning on) stayed indoors during most of the summer months, as it was cooler outside on the balcony, first thing.
However, in the past few weeks, she has taken to hiding under this den. When cats can't see out, they assume they cannot be seen.  Nobody would guess there was a grey-and-white cat sitting under that dustsheet (which was a curtain originally), after all: 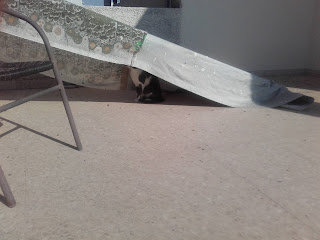 It took us a while to realise that she wasn't just meditating, or needing time to herself when she sits up there, sometimes for hours. Instead, she was waiting for a bird to land on the balcony. There seem to be birds nesting in part of our roof, and they often fly overhead.  Alex has occasionally caught one, and brought it into the house fluttering around, much to my horror.  Jane, until this summer, had rarely caught anything bigger than a lizard.
But she is more subtle than her brother. She seems to know that we don't want her chasing birds around the house. And it all happens when we're not there, so it's still speculation, though it's not at all Alex's style. The first time I found a little pile of feathers at the end of the ladder, I was a bit surprised, but swept them up (not an easy thing to do!) and thought no more about it.
Until it happened a second time.  And a third time: 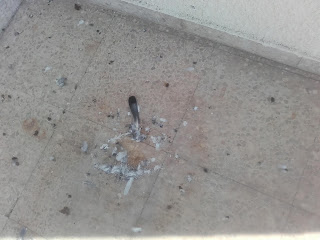 It's not entirely obvious from the photo, but there are yet more tiny feathers in a pile at the end of the ladder. Jane, at six years old, has turned into a hunter. It doesn't seem to have done her any harm; indeed she's looking healthier than ever, and also a bit fatter.  I thought at first that she was fluffing her fur out to keep warm, in this chilly (to her) 25 degree temperature we now have in the house.  But I wonder if the combination of cat grass and fresh birds is giving her the nutrition she actually needs.
Short of keeping her inside the house all the time, not allowing her even on the balcony (which would be very stressful for her), I don't see any way of stopping it.  At least she's not bringing them into the house.
Posted by Sue at 17:02