Having known about the Larnaka Salt Lake for twenty-three years, now, and walked along part of it probably 100 times or more each year since 2013, I tend to forget that it's quite unusual. Lakes, after all, generally have fresh water. I know there's a famous Salt Lake City in the American state of Utah, but it's only since knowing about our local salt lakes that I realised there was an actual salty lake there.

We've had two heavy rainstorms so far this month.  The first one didn't appear to make any difference to the level of water in the local Salt Lake, but after the second major rain, it did look as if it were rather fuller. 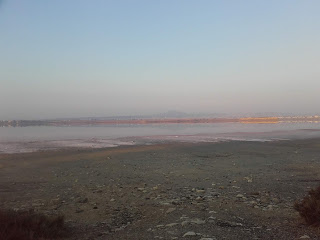 Those white bits near the water's edge are patches of salt.  Today, we walked a bit closer to have a look, as yesterday's warmth and sunshine had evaporated some of the 'new' water, leaving quite a bit of salt exposed: 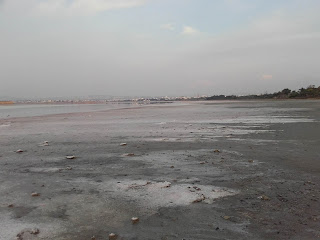 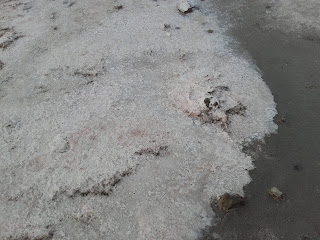 And here's an even closer view of one bit: 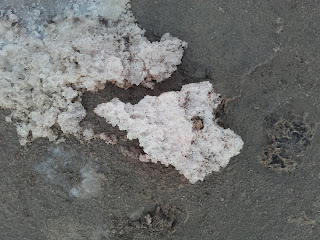 It looks very dirty.  According to various sources, salt was harvested each year up to 1986 - I hope they cleaned it and re-evaporated it before marketing it. But since 1986 it hasn't been legal to use or sell the salt, which is probably just as well.
Another wide view although the white salt looks rather pink in this photo: 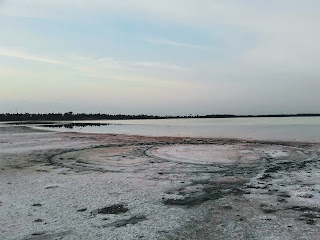 That's possibly because the sun was properly rising at this stage: 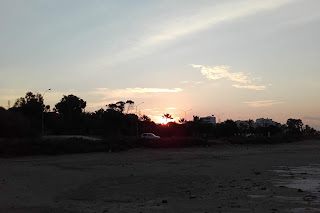 We walked a little way back along the sand, but it was quite boggy in places, so we pushed our way through the shrubbery to the trail. And we think we saw a few flamingoes.  This photo doesn't show them at all: 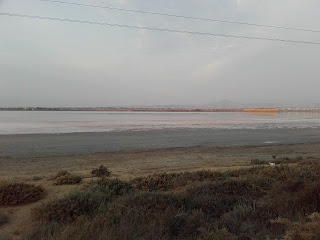 But in this one, where I used the camera's digital zoom, I could just about make out a little line of pink, right in the middle.  It's hard to spot on this smaller version, but if you click the photo to enlarge it, you might see it too. 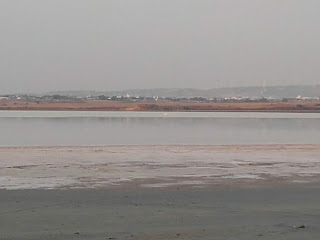 As the level of the lake increases, there should be more flamingoes arriving. Possibly as soon as next week, as there's a lot more rain predicted for this weekend. The flamingoes come either from Africa or from the Middle East, or possibly from both general locations, and it always amazes us how they seem to know instinctively when there's enough water to come back, whether it's late September or, like this year, mid-November.
Posted by Sue at 15:32