Some long-standing friends of ours are in Cyprus at present. We were surprised when we learned that they were here, having flown out from the UK early in October; most potential visitors have been forced to cancel. But we were delighted to hear from them, and were able to invite them for a barbecue here a few weeks ago. We were also able to lend them some books. This evening, they took us out to eat, at the Monte Carlo restaurant along the McKenzie part of the sea-front. 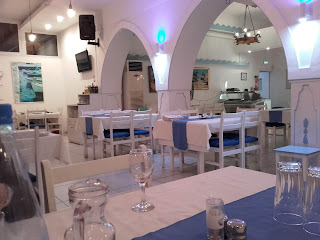 It's not somewhere we've been very often. Maybe twice in the twenty-three years since we moved to Cyprus, and one of those other times was with these same friends. They suggested we have a meze, and it seemed like an excellent idea. Since none of us has an enormous appetite, we opted for what is officially a two-person meze to share between the four of us.

Meze (pronounced something like 'MEZZ-ay') is a traditional and popular form of eating in this country. Here's a brief explanation of a meze in the InCyprus online news. Most years we have meze maybe a couple of times, with visiting friends, at a restaurant that's walking distance from here, Kura Giorgena's. Not this year, though...but then nothing much has happened normally this year.

I wasn't keen on mezes when we first came to Cyprus, as the focus was very much on different kinds of meat and/or fish (including sea-food) and I prefer vegetarian options. But nowadays mezes usually include more than just different kinds of meat or fish, and they're great to share with friends. There's usually a minimum of two portions per party, but it's quite normal for three or even four people to share a two-person meze, as we did this evening.

A meze is a kind of ongoing meal, starting usually with salad, bread and different dips, moving on to some vegetarian dishes and perhaps halloumi, bacon and/or sausage. Then other kinds of local meats are brought out, gradually, and usually some chips (french fries).  It's surprising how much one can eat when new, tempting foods keep arriving on the table and one takes just a spoonful...

Tonight's meze started with a Greek salad (tomatoes, cucumber and feta cheese, with a bit of lettuce), accompanied by two kinds of warm bread, olives, Greek yogurt, tzatsiki and a couple of other dips. I enjoyed that very much, and could have made a meal on just that 'starter'.

The next things that arrived were halloumi and bacon (I had halloumi but not bacon), then three vegetarian dishes: pasta with grated cheese, mushrooms in a lemon sauce, and scrambled egg with courgettes. 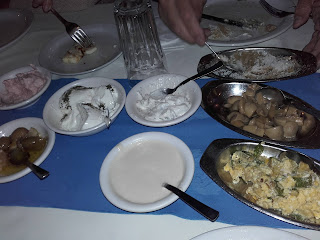 All delicious (from my point of view) and although the others had some of them, I then finished all three when the meat started arriving.  I did eat a little chicken and several of the chips, but much preferred to eat, slowly, a bit more salad, or egg, or mushrooms.
Meze has the advantage that each person can choose as much or as little of each dish as they wish - if any of them ran out, we could have asked for an extra portion of just that. But there were so many different kinds of meat that there was plenty for both the guys who liked it, and some (though not much) left at the end.
After we'd finished, and everything was cleared away, we were given a dessert - some Greek pastries containing anari (a bit like cottage cheese), and some candied fruit and walnuts.  I was extremely full after the first part of the meal, but couldn't resist the pastry - though I forgot to take a photo - or one of the candied walnuts.
We wore our masks as we went in, of course, and the staff of the restaurant were wearing theirs all the time. However it's fine to take them off while seated, so long as there are no more than six people at a table.
We arrived early, around 6.15pm so were not surprised to find the place empty. One other couple came in shortly afterwards, and ate at a table several metres away.  And when we were thinking of leaving, around 8.00pm, a few others had come in. But it certainly wasn't crowded. Restaurants have been hard-hit by the Covid restrictions, and the greatly reduced number of tourists this year.
Posted by Sue at 20:55