Lidl supermarket, an international chain, has been in Larnaka for ten years this month. When we first visited, lured by some enticing advertising, we weren't all that impressed. By that stage we had got into the habit of doing one major grocery shop per month, at Metro, and in between times I would pop to the local discount shop, or the fruit shop. And it was clear that while Lidl had some products at excellent prices, the range was too limited for our regular needs.

However, in the past ten years we've been there quite a few times. Their advertising brochures arrive most weeks on Saturday, and while I throw most junk mail straight into the paper recycling, we usually browse the Lidl one. Richard has bought some inexpensive and reasonable quality tools there, and we've bought a few appliances, too, when they're on offer.

We like their coffee beans, although we haven't been able to find any for some months now. And there's the biggest problem: we understand that the 'special offer' products, often connected with a specific country or culture, are only available for a short period. But they also have regular products, which are sometimes there, sometimes not. They always have some basics - sugar, white flour, toilet paper etc - but there's no guarantee of any particular brand, nor of some products.

This week's catalogue showed some silicon muffin pans, something I'd been thinking about for a while. I have plenty of small cake tins, but sometimes I want to make bigger cakes, the ones generally referred to as muffins (or American muffins, as the muffins I grew up with, known as 'English muffins' in America, are rather different). These muffins pans weren't going to be available until Thursday, so we knew from previous experience that we needed to go first thing on Thursday to have any chance of buying any.

Of course 'first thing' is actually mid-morning now, since we're under 65 and in good health, so we can't go to shops before 10am.  But shortly after that hour, we headed to Lidl, armed with a short shopping list of things we would be running out of in the next few weeks, and which we have previously bought there.

I was pleased to find that there were still plenty of muffin pans, albeit at the bottom of a box with various other silicon cookware. We pondered buying four, but decided that two would be sufficient; it's not as if I make muffins all that often. I just like to have the option. 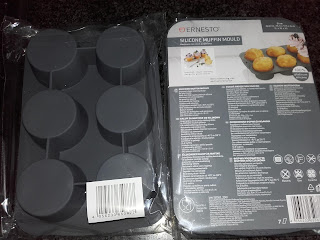 I didn't hold out much hope of coffee beans, which is just as well as there weren't any. On the other hand, there was a good amount of a Columbian ground coffee that we tried a while ago, and which I liked very much. We can't find Fair Trade ground coffee here, but at least it has the symbol for Rainforest Alliance.  We bought three packets, which should keep us going for a while: 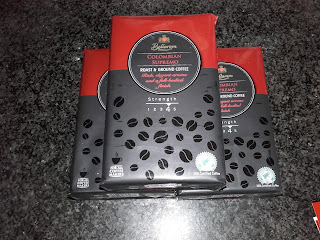 I didn't hold out much hope of finding my current favourite peanut butter, as there wasn't any last time we were at Lidl, but I was pleased to find that they had it in again. It was even on special offer, reduced by quite an amount. So I picked up two jars: 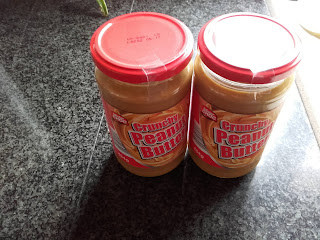 Chocolate - thankfully the basic dark chocolate is usually excellent value, and is the one I use for cooking. It's dairy-free and UTZ certified, so we're happy to buy that regularly. Perhaps six bars was a tad extreme, but I doubt if we'll go to Lidl again before the New Year. 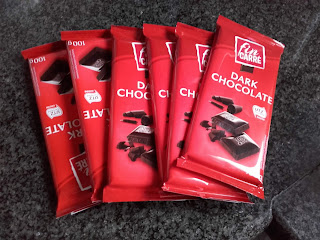 The only pasta we generally buy is wholewheat spaghetti, and that's something Lidl usually has in;  one 500g pack lasts us around five months as we're not great pasta eaters. Lidl is also also a good place to buy dried chickpeas, which are useful for many things. Both products were on my list, and I was pleased that I managed to find them both, even though the store shelves regularly change, presumably to encourage people to look around the entire shop in the hope of finding what they want. 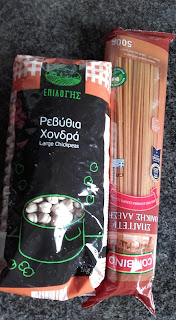 We also bought some battered cod and some salmon, but I put those straight in the freezer when we got home, so didn't take photos. But I couldn't find any mayonnaise; for several months Lidl stocked our favourite brand, but I couldn't find any this time.  Nor could I find raspberry jam, something I dislike having to buy, but since we can't get raspberries here, I can't make it.
The other thing we bought was a pack of sharp knives. I managed to break the tip off my favourite sharp knife just over a week ago, so when I saw that there were some knives on special offer at Lidl this week, I thought we might look at them. I hadn't realised that they would be in a set of four, but at €6.99 for four, we thought them well worth getting. Ernesto seems to be a reasonable brand, and they're guaranteed for three years. 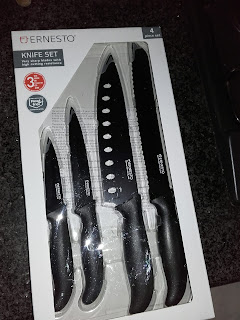 The other thing we bought was a small poinsettia plant. We like to have one each year, coming up to Christmas; our living room table by the window seems to be an ideal place for poinsettias, and they last, usually, at least until Easter. November is a bit early, but we know from experience that they can be harder to find, higher priced and less attractive looking if we wait until December. 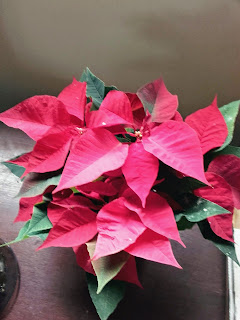 So, once again our visit to Lidl was something of a mixed experience. A couple of very useful non-food purchases, a few random food items that were good value... but we'll still need to go to Metro next week for groceries that we can't buy at Lidl.
I know some people boycott Lidl; their policies for workers aren't great, and they don't score well on many of the ethical categories. However, we try to buy products with some kind of ethical labelling, and don't usually go there more than five or six times per year.
Posted by Sue at 15:57