Our two years in the United States (1992-1994) made us somewhat bilingual as far as British/American words and phrases go. On the whole I use British phrases - a lift rather than an elevator, trousers rather than pants, car boot rather than trunk, and so on, although I don't necessarily even notice when friends use the other versions, or when I read them in books. And with globalisation, and popular culture, and of course having had several good friends from the US, there are some words where find myself adopting the American usage.

So, for instance, movies and films are pretty much interchangeable, in my mind. I use both words, for variety, if I'm writing about one. And I realised recently, when asked a question by an online friend, that I use the word 'cupcake' to describe small cakes (often iced/frosted) in cases, whereas, growing up, I would have said 'fairy cake', or possibly just 'little cake'.

And then there's muffins.

As a child, I knew muffins as bread-like flattish things, a bit like crumpets, which would go in the toaster or under the grill, and could be eaten with butter. However I had almost forgotten they existed until we heard that, in the United States, they are known as 'English muffins', because their 'muffins' were baked items that resemble cupcakes - or fairy cakes - in appearance, although they tend to be larger, and can be savoury.

Nearly three decades later, I haven't seen an 'English' muffin in years, and now use the term 'muffin' to refer to the American items. I've seen them in supermarkets (in the UK), and even in some restaurants or cafes, sometimes referred to as 'American-style muffins', but sometimes without any adjective at all.

I mentioned on Friday that we had bought some silicon muffin pans. This led to some discussion with our friends about the difference between cupcakes and muffins. Apart from the fact that muffins can be savoury and are never iced (or frosted), what is the essential difference between, say, a chocolate cupcake and a chocolate muffin?  The fact that muffins are usually bigger isn't an essential difference, since one can buy 'mini muffins', and there's no reason why one shouldn't make large cupcakes.

I knew that muffins tended to be denser, but it's been a long time since I actually made any. So today, as our friends were coming for the every-other-Sunday games afternoon and shared  evening meal, I decided to try out my new muffin pans. I checked various books and found a couple of recipes that sounded rather good, and for which I had the ingredients; one with oats and cranberries, the other a triple chocolate muffin recipe.

I made the cranberry one first. The recipe involved putting the dry ingredients in a mixing bowl (flour with quite a lot of baking powder, oats and brown sugar, then mixing in the cranberries), then lightly beating eggs, oil and quite a bit of milk together, and pouring them in. The instructions said to stir with a metal spoon until just mixed, not beating or over-mixing. So I did that, and divided the mixture between the twelve muffin pan holes, and put them in the oven at 200 degrees.

As I wanted to cook the chocolate ones fairly soon afterwards, I had to take them out of the pans while they were still warm, which wasn't a great idea; I knew they were meant to be left in silicon pans until cold,  A few of them did break slightly, but seven of them came out perfectly, which is good as there were seven of us eating together in the evening: 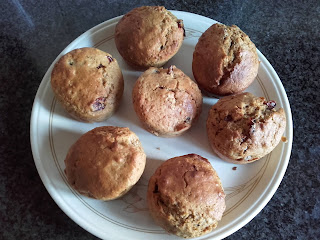 The recipe was quite different from a basic cake recipe - flour was the main constituent, and the only fat was 6 tablespoons of oil. The sugar content was fairly low too. Mixing the wet ingredients into the dry ones is typical of cakes such as gingerbread, but mixing only until JUST combined is unlike any cake I've made - and I've baked a lot of different recipes over the years.
The chocolate muffin recipe started with melting 175g dark chocolate with some butter (I used dairy-free spread, of course), and again the amount of butter/spread was very small, only 50g, whereas there was 275g flour plus 50g cocoa in the dry ingredients. And, again, egg and milk were added (dairy-free milk for us as we don't use cow's milk).  And chocolate chips.
Here they are, out of the oven: 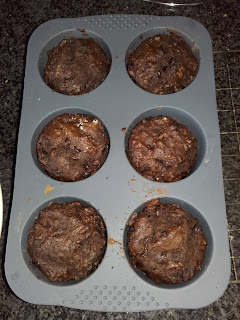 And here are the seven I put out for the end of our evening meal: 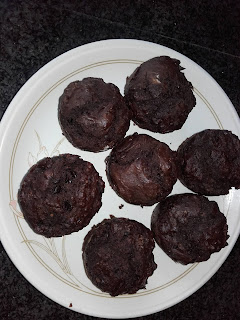 They were good, I thought, quite dense and a little chewy; not as sweet as cupcakes, and more filling, though that might just be because of the size. A basic cupcake would have equal weights of butter/spread, sugar (usually white sugar), flour (usually white flour) and egg,  with no extra fluid, whereas these muffins had more flour than anything else, mostly wholemeal, and a significant amount of milk.
The addition of cranberries or chocolate chips could work in cupcakes, of course, as could using wholemeal flour, and brown sugar, and there are many varieties of cake, some of which don't use any kind of butter or spread.  But I think I now have a better idea of the difference - and on Googling to see if there's anything official, I found this interesting discussion.  Many of the points made are similar to the conclusions I had come to, and one of the experts states that muffins are technically a form of 'quick bread'.

I have made muffins in the past, using cupcake-size pans, with cupcake cases (since I only had metal pans) and recalled that the muffins tended to get stuck to the cake cases far more than little cakes do. So using these silicon pans is a great improvement as they mostly came out very cleanly, and of course there were no paper cases to dispose of.

I am writing a sequel to my children's book, and at one point mentioned that the kids had cookies. My wife read that and said that she would never say cookies. Cookies are what I call what Americans call cup-cakes, and (I discovered after some asking around) the British called fairy cakes. Little cakes with icing in a paper cup.

Eventually it seemed that the terminology would be so confusing that I changed the story and gave the kids meringues instead.