Although Advent started on November 29th, I wasn't quite ready to start thinking about Christmas preparations until December started. Well - other than making our cake a month ago, and feeding it a couple of times with extra brandy.  And something else I order online for a selected few people, which had to be done before the end of November.

Then I realised I had to think about Christmas cards. Many people are not sending any this year, due to extremely slow postal deliveries. The number of cards we send out has reduced significantly over the years: from about seventy ten or so years ago to just thirty-five last year. That's partly due to losing touch with some folk, for various reasons (including a small number who, sadly, have died), and partly because more and more people are now sending Christmas greetings by email rather than in the post.

Since we didn't go to the UK in the summer, I had no chance to buy Christmas cards for this year; I've never much liked those I can find here (and it's not easy to find them at all - or maybe I'm looking in the wrong places). I discovered that I had a handful of reasonable cards that I was willing to send - but nowhere near 35. So that made the decision easy:  I wrote just six cards, to relatives who are a generation above ours - even though most are on email anyway. 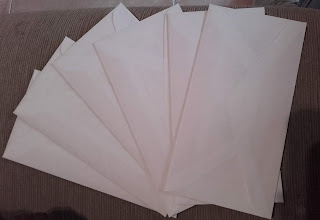 I even had six UK stamps in my desk. So last Tuesday, the first day of December, I walked to the Post Office, and put the cards in the letter box.  I have no idea if they will arrive in time for Christmas...

Something else I usually do early in December is to make a batch of mincemeat and some Christmas puddings. But we still had half of last year's mincemeat in the fridge, and one Christmas pudding - so as we won't be doing much entertaining this year, I didn't need to make any more.

On Wednesday, December 2nd, we spent the morning with a local friend helping her publish her collection of forty-two short stories via Amazon KDP.  We have been very impressed with this method of self-publishing and have helped various people this year to publish their work. The quality is excellent and 'print-on-demand' means that there's no need for a publisher (or writer) to risk anything in advance.

In the evening, back on the Advent theme, I attended a short Advent service via Zoom, offered by St Helena's Church.

I'm not entirely sure where Thursday disappeared to. We shopped on Friday, but only at the froutaria. We met our friends in the evening for a shared meal, as we usually do, and on Saturday I cleaned the house fairly thoroughly.

On Sunday I did quite a bit of baking: some bread rolls, a pan of gingerbread, and some different biscuits for our shared afternoon with friends, and for Monday. And in the evening we went to the Christingle service at St Helena's.

We weren't sure whether there would be room - there were strict limits on numbers of people who could attend any church service in Cyprus, and the maximum permitted in the St Helena's building was something like 28, with distancing between unrelated people or groups, and of course masks on all the time. However the service was streamed, and there was the possibility of seating outside. 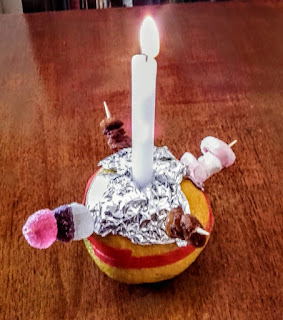 In the event, while twenty people watched online (and many more afterwards) exactly the right number of people turned up at St Helena's, and it was a pleasant service. I am very thankful we were able to go, because today new pandemic restrictions have been announced in Cyprus: there will be no more church services with congregation present until at least January. So the Carol service, Crib service and Christmas Day service will be online only.  That will be strange, and quite disturbing not to go to any church service at Christmas.

On Monday the local Christian writing group had to meet in two groups, as there were eleven or twelve of us who wanted to meet, and no more than ten people can be present in anyone's house. We usually have a shared potluck-style lunch in December, but decided it was best not to do that this year. Perhaps we'll celebrate at Easter instead. Or whenever we are finally able to meet again as one group.

In the afternoon I went to the local book discussion group where we did have some Christmas nibbles to share during the meeting - there were eight of us, spread out in a distanced way around the table which was full of finger foods.

Then on Tuesday, my friend Sheila and two of her daughters came over to help put up and decorate our Christmas tree. When I say 'help', that's how it was when the girls were smaller. But now they put the three together unaided, and decorate exactly as they wish.  They do an excellent job, and I rarely move or change anything. 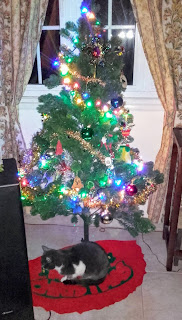 I started ordering presents for family members yesterday too - so much less stressful not struggling through Christmas crowds (not that it would happen this year).

And in the evening, we watched that Christmas classic DVD 'Love Actually', which we hadn't seen for eight years. I had reservations about it when we first saw it, but enjoyed it a lot more last night.