Buying a boat in Larnaka

After the awful tornado that destroyed Richard's Mirror dinghy, he's been looking around for a replacement. He had been thinking for a while that he would like a slightly bigger boat. The Mirror was ideal to learn on, but could only really take one other person - or two small ones.

However buying a boat in Cyprus is nothing like as easy as it would be in the UK. Yes, there are web-sites with yachts for sale, but even the second-hand ones are very expensive. I looked in the classified section of the local paper, but there was nothing there. Richard bought the Mirror nearly two years ago after seeing an advert in Metro supermarket - but it's the only one we've seen there.

But in Cyprus, relationships are all-important when it comes to buying something like a boat. The fact that Richard has been sailing fairly regularly at the Larnaka Sailing Club means that other people know him, and think it's a good idea that he has another boat, as he's one of the few people who does actually sail!

Moreover, we have a friend who knows several people at the Marina, where bigger boats are moored. And he said that there were quite likely some suitable small boats there. Indeed, he had been asked a few years ago if he wanted to buy a small yacht for £450. So he took Richard to see it, and also checked the notice-board at the Marina, where there are sometimes boats available for sale.

This is the one our friend had been offered. The White Boat: 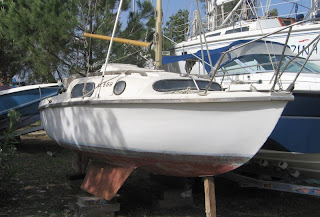 It even has a small cabin inside. It needs some refurbishment: the cabin is in a very bad state and the boat needs some painting and repairs. But it looked a very nice boat, and an excellent price.

There were two others of similar size listed for sale at the Marina.

Next problem: finding the owners. Records are usually fairly casual, and while everyone seems to know everyone else's business, it's not always easy to pin down a phone number. But Richard managed it.... and learned that the White Boat is in fact not for sale after all. The owner may even refurbish it himself, although it doesn't seem to have been touched for years...

The second phone call was to a lady who said her boat was for sale at £6,500. Ah. Well, we won't be considering that one, then.

The third phone call was to a man, who said his boat was for sale at £6,000. But when Richard was about to say, 'Thankyou, goodbye" the owner said, 'But.. I might negotiate. It doesn't have to cost that much."

Haggling, in a genteel sort of way, is fairly common in Cyprus, so Richard said that he would have a look at the boat, and consider it if the price was right. He did some research, and learned that he could buy something similar elsewhere for about half the price, although shipping costs would then increase it. But he went to look. This is the Blue Boat: 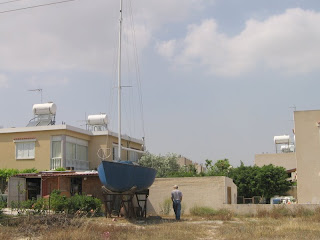 It's never been sailed. Instead, it's been sitting out in the sun and rain for about five years, so it's looking a bit scruffy. More significantly, although there is a cabin inside, the entrance is via a porthole. And, for other reasons, it's not ideal. But Richard had a chat with the owner, who was very pleasant, and said he would let other friends know.

Meanwhile, our Sailing Club friends had been trying to find out if there was a Sailing Club boat that Richard could at least use while looking for something to buy. The boat they thought was owned by the Sailing Club turned out to be a privately owned one, a Wayfarer dinghy which hadn't been sailed for about five years - but which was, thankfully, undamaged by the tornado. So he went to look at that, and was very impressed. It's not quite as big as the other two, and there's no cabin - but there's room for at least four people in it. And it's bigger than the Mirror, so quite sufficient to provide a new challenge.

The guy asked 500 for the Wayfarer... and it seemed like the right price, and the right boat. So here it is, the Light Blue boat: 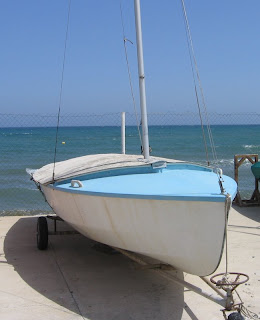 He and our friends cleaned it thoroughly, then he took it out for the first time on Saturday, with our friends' ten-year-old son as crew. Richard said it was wonderful; he's very pleased with it.

Oh, and we heard that there are two more dinghies for sale at the Sailing Club: 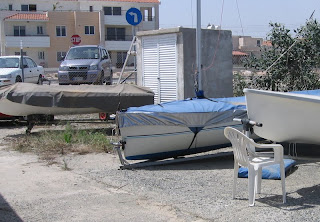 We want to give the Light Blue boat a name. Probably something to do with the colour - suggestions welcome.

Richard salvaged the anchor, the oars, and some other useful bits and pieces. Then they loaded it onto the back of a truck that's used for taking away rubbish from the Sailing Club: 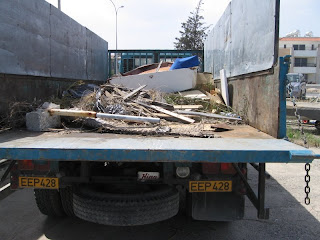 Here is some boats for sale located at Cyprus - Cyprus boats