Mostly, we have our main cooked meals in the evenings. On Sundays, however, Tim likes a traditional British-style roast meal, so generally he cooks it for us.

However, Cyprus summers are hot and humid, and even with air conditioning, he doesn't necessarily feel like cooking during July and August. So sometimes Richard pops out to New York to pick up a ready-roasted chicken, which we eat with french bread and salad (unless Tim has decided to roast some potatoes and cook some broccoli).

Of course, it puzzles some of our visitors when we say Richard will pop to New York... but we've been here so long that, like other locals here in Larnaka, we refer to our favourite take-away place, not the city in the USA. It does have a fake statue of liberty outside: 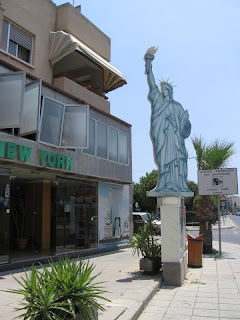 .. but the food doesn't seem to be very American, other than (perhaps) the excellent roasted chickens. They also serve a variety of pasta dishes, a few vegetarian options such as cauliflower cheese, and various vegetables. It's a very hot place - they don't seem to use any air conditioning - but the staff are efficient and helpful, and the food excellent.

Today, Tim was invited out to lunch with some friends, so Richard and I decided to have something different from roast chicken. We settled on moussaka, which is decidedly Cypriot, or at least Greek. And some salads, which are sold in little tubs in the fridge.

Hello Sue...that was cute about "popping over to NY" - thanks for the pic. I would have been one to think you actually might have made the trip :-). Here in Vancouver there is a part of town called "The British Properties" where the wealthiest of the wealthy live:-). So if we go by there, we haven't been to Britain, although round trips to the UK right now have been seen around $300. Air conditioners by the way were sold out here last week. We were between 37-42 C (l05F in our part of town). Very warm. That beach walk you described sounded nice.
Shirley K