On Thursday, it was our 27th wedding anniversary. Richard had been feeling a bit overwhelmed with work, and over-tired, and I had been feeling tired with the heat and humidity. So he decided it would be nice to go away for a couple of days, into the mountains. Many people in Cyprus go to the mountains for the summer; they aren't always cooler, but the humidity is considerably lower.

He booked us into the Mill Hotel in Kakopetria, a small village in the Troodos mountains, on the recommendation of some friends who had recently stayed there. It took about an hour and a quarter to get there, going towards Nicosia and then Troodos. Much nicer roads than going to Troodos out of Limassol! 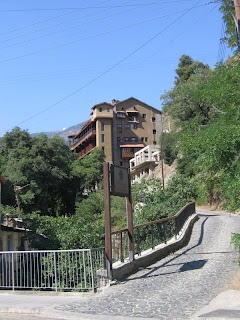 It wasn't too hard to find, and turned out to be very pleasant, with enormous rooms and a stunning view over the valley from our balcony. 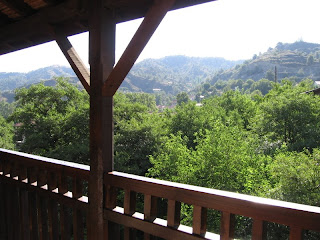 It wasn't actually any cooler than Larnaka - the temperature gauge in the village told us it was 36C - but it felt much nicer due to the dryness, and by evening it felt pleasantly cool. There was no air conditioning in the bedrooms, just a ceiling fan, and that was fine. We were a bit surprised to see that there were very few other visitors in the hotel - only six tables were set in the dining room for breakfast! - despite a huge staff, and excellent service.

We walked around the village - just a few shops and houses - and found the 'bad rock' after which the village of Kakopetria is named: 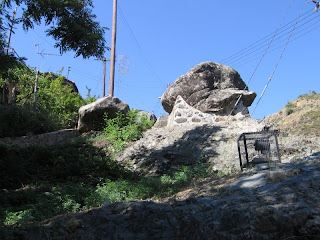 Not exactly a cheerful story: apparently Pagan customs mixed with Christianity in Cyprus, several hundred years ago. A newly-married couple were celebrating their marriage by dancing around a huge rock to Aphrodite, goddess of love, who (legend had it) was born in Cyprus. The rock fell and crushed them. The rock now takes a place of honour and has a village named after it... 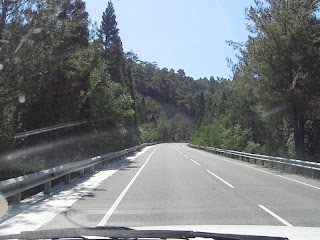 We drove the 16km into Troodos on the morning of our anniversary, and were pleased to find that the road works of previous years had finally gone. Not that there's very much in the village: a small grocery store, a children's playground, and several tourist stalls selling souvenirs, sweets, and so on. Oh, and a couple of small restaurants. We had some cold drinks, and browsed the stalls but didn't buy anything. It was definitely cooler in Troodos, even though it's not much higher than Kakopetria. 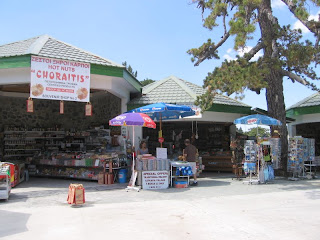 It only gradually occurred to us that the general view didn't look very Cypriot. This is partly because it's so green - in the mountains there doesn't seem to be any lack of water - and partly because the houses don't have water tanks and solar panels on the rooftops: 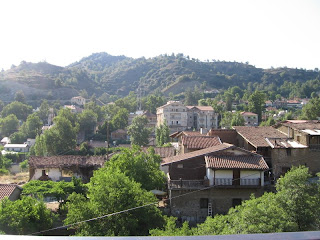 All in all, it was a lovely break - although Larnaka felt all the more humid when we got back yesterday morning.
Posted by Sue at 16:06

Oh Sue...loved you post on Kakopetria and so glad you enjoyed your stay. It's a wonderful village and your remarks bring back great memories of last summer at Rocky Point outside Troodos Village. Hope you enjoyed the Garlic trout at The Mill. The man (family) that owns The Mill has quite a history in the village also. Glad to hear there was water in the mountains, as last summer some of the roadside springs starting drying up in late summer. Watching the ski webcam this last winter looks like the mountains had good snow. Hope you'll be able to take advantage of some of the other little mountain villages.

That was fascinating. I visited Cyprus once in 1985 (Limassol) from England.

Nice "travelogue". Been to kakopetria many times, but never visited the "Kako Petra".