Electricity bills and meters in Cyprus

Long ago, towards the end of last century when we first moved to Cyprus, we were told that electricity was 'very expensive'.  The people Richard worked with used gas for all their cooking, and various forms of heating in the winter that didn't include electric heaters. None of them had air conditioning.

And, indeed, Cyprus was one of the most expensive countries in Europe for electricity, so we, too, were as careful as we could be. We turned off lights when we weren't in rooms, and when we did, eventually, instal one air conditioner in our living/dining room, so that we could use computers without destroying them, we calculated carefully what the cost of running it might be, and didn't use it more than was absolutely necessary.

But costs are lower now, and appliances are more efficient. I like having an electric oven, and various other kitchen gadgets. Lightbulbs now are so long-lasting that we think nothing of leaving them on when we're out, or when we forget to turn them off. We knew, of course, that it would be pricey using our electric water heater in the winter, and the air conditioners in the summer. And, indeed, our bills for those seasons were sometimes double those in the spring and autumn months.

However we didn't look too closely into the amounts, as they were never unreasonable; certainly not the huge amounts we heard about from some other folk here and elsewhere.

Towards the end of July 2019, we had to replace the air conditioner in our bedroom. It was quieter than the old one, and considerably more efficient. We started wondering how long it would take to pay for itself, so to speak. And then we wondered whether, if we replaced the elderly and very inefficient air conditioner in our living room, and ran the new one more often, would it in fact cost less than turning it on only when in the room?

Since the ambient temperature was only about 32 at the time, I wondered if running even the old unit more often at 30 degrees, rather than our usual 28, would make the whole house more comfortable. In particular it would remove the humidity which is often the worst part of the heat.

So I started monitoring our electricity usage. The meter is outside, in a little box so it's easy enough to read. 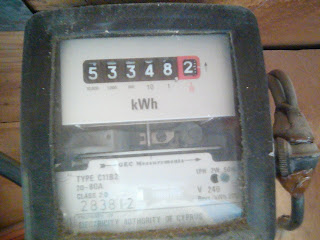 And since I was checking it anyway, I thought I would also keep a note of our guest flat electricity usage. 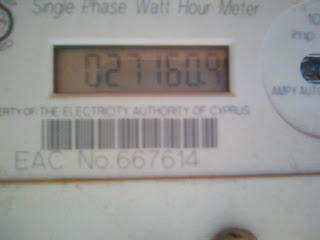 After a few days, I realised that although the electricity usage of the main part of the house was quite reasonable, we seemed to be using an inordinate amount in our guest flat, which was empty at the time. We knew it would use perhaps one or two units each day, as all our water pumps and one or two other things are connected to the guest flat electricity.  But not ten or more, which is what we were seeing.
We went through the entire flat, checking. The fridge and freezer were off. We turned off the wall switches for anything that had an LED light. We made sure the TV wasn't on standby.  We couldn't work out what it could possibly be. Were the pumps using a ridiculous amount of electricity? Was someone tapping into our electricity?  Or was it possible that we had a faulty meter....?
So Richard found a different kind of meter, one he had used years ago in his office. He said he could check the daily usage of electricity from our guest flat, as well as a couple of appliances. So we plugged it into our freezer - wondering if that was using too much electricity - and our fridge-freezer, which was about fourteen years old, and the guest flat. 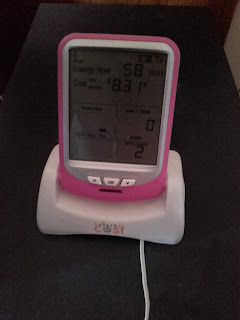 I know. It's pink. I don't much like pink. But it's a useful gadget... and over the course of the next week or so, we learned two things.
1.  Our guest flat, according to this meter, was only using one or two units per day, as we expected.
2.  Our freezer used less than one unit per day, but the older, less efficient fridge-freezer used between three and four units per day.
The first of those was of more immediate concern. Richard went to the electricity board, and after being sent to various different departments, finally managed to explain the problem. The person he spoke to said that the electricity board could come and instal a new meter for us, and take the old one away for checking.
If it turned out that the old one was, indeed, faulty, then this would cost nothing, and we would be refunded a percentage of the past year's bills. BUT.. if it turned out that we were wrong, and that the meter was not faulty, then we would be charged 70 euros. Not unreasonable, in the circumstances, and we were pretty sure that it WAS faulty. However we didn't know how accurate their tests would be...
The new meter was installed the following week, and started giving figures that matched with the amounts on our pink meter: 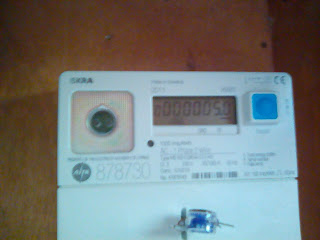 And to our great relief, we received a letter from the electricity board, informing us that our old meter was faulty, and we would receive a refund on our next bills. Which, indeed, we did.
So we were very pleased that I 'just happened' to start checking the guest flat electricity usage when I did.
Fast forward to the middle of May this year. When we realised we would not be visiting the UK during the summer, as I wrote in another post, we replaced three air conditioning units - the very old one in our living room, and the two which are the most used, in our studies.  We also replaced our fifteen-year-old fridge freezer, deciding that if we were going to do it, then the best time was right before the heat of summer.
And I started checking our electricity usage each day. It was quite enlightening. We realised that leaving ceiling fans running all day, as we have done some years, isn't very efficient. Unless we're actually in the rooms, there's little point as they don't change the temperature. They only use about 100 watts but that means one unit is used every ten hours.. which doesn't sound like much, but for three or four ceiling fans, it can quickly mount up.
However, we did use our air conditioners extensively, including running the living room one almost all day on the hottest, most humid days. It was a very hot summer, with several records broken.
Our electricity bills are two-monthly, and it happened that our meter had been read within a few days of our having bought the new fridge freezer and air conditioning units. Between the middle of March and the middle of May, usually our lowest usage, we had clocked up 785 units. That was with no air conditioning usage, and very little water heating, as the solar heating works effectively from about March through to November.
Between mid-May and mid-July, with our newer, more efficient appliances - and a lot of air conditioning in late June and the first half of July - we used just 661 units. That compared to 1119 in the previous year during the same period.  With a temporary reduction in fuel costs in the equation, it was probably the lowest electricity bill we had ever paid.
The second half of July was hotter still, as was August. And it remained hot in September, so we continued using air conditioning.  Inevitably our electricity usage was higher.  From mid-July to mid-September we used 1049 units; that compared to 1289 the previous year - and in 2019 we had two weeks in the UK at the start of August; I had another two-and-a-half weeks out of Cyprus.  Had I been here, as I was this year, it would have been a great deal higher.  The last time - three years ago - that we were in Cyprus all summer, we used over 1400 units.
So we have probably already saved, in electricity bills, the cost of one of the new air conditioning units. I know we're fortunate to have been able to do this; the 'Sam Vimes Boots theory of socioeconomic unfairness' holds, as ever.  But as the sterling/euro exchange rate gradually gets worse, and may plummet still further, it's good to have lower bills.  And newer appliances are better for the environment, too.
Posted by Sue at 15:43

That's an amazing difference. I'd always been so worried about using the air con here and we had always generally 'suffered' through the heat in the summer and cold in the winter as much as possible over the years. Over the last 2 years we started using the air con a bit more,and was surprised to see it wasn't anywhere near as bad as I expected. Of course it must have helped that over the same period we replaced our very old fridge freezer and washing machine, as well as not replacing our dishwasher that packed up.