The Mall of Cyprus

On Saturday, we decided to go to Ikea in Nicosia. We wanted some blackout blinds; particularly one for Tim's bedroom. About six months ago, our neighbours had their house repainted on the outside. One of their improvements was a couple of movement-sensing lights. Unfortunately, they're extremely sensitive and switch on any time a car goes by. And Tim had a balcony that overlooks these lights. With french windows. So his room was getting lit up brightly at random intervals through the night.

Next to Ikea we had noticed, on previous visits, something called 'The Mall of Cyprus'. It hadn't really occurred to us before, but there really aren't any malls to speak of in Cyprus. Most shops are outside - the weather is usually good, after all - and although malls are popular in Asia, and America, and parts of Europe, they hadn't appeared in Cyprus.

So we thought perhaps we should have a quick look, just for the sake of research and interest. Not that it's huge, by any means. This is what it looks like upstairs: 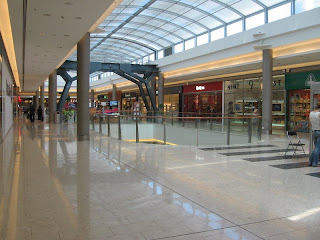 And there's a mall-map, just as one would find in any Asian mall, except rather smaller. Even many of the same shops - such as Next and Starbucks. 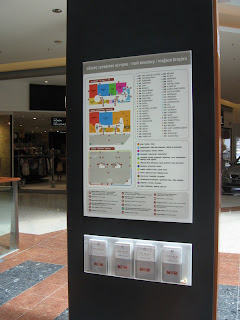 There was also a fairly large Carrefour.

That morning, our citrus juice extractor gave up the ghost. It had been making unpleasant graunching noises for a while, so I wasn't surprised. It has been extensively used, although it's not quite two years old, but it was a very cheap one.

So we had a look at the electrical section, and found a Braun juicer that should meet our needs. And one or two other rather useful items....

We didn't need a trolley, but there's one of those useful escalator-ramp things that will catch hold of a trolley, should one need it: 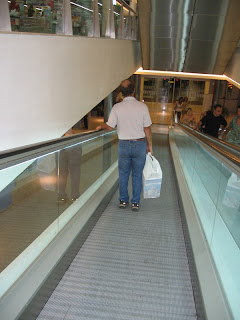 Then we went to Ikea. We found blackout blinds, and - as always - various other bits and pieces.

A successful morning, in all. I don't like shopping much (though Richard does) but when we manage to find all the things we wanted, and a few others that we hadn't realised we needed, it feels like a satisfactory trip. Even though I was totally shattered for the rest of the day!
Posted by Sue at 19:02

I love the trolley escalator and, even though I am 44, it is an enjoyable part of our trip to the supermarket in Lemesos when we're out.

That mall is bigger than our local one! I really like the natural lighting at your mall.

Shopping outdoors does sound even better!

Although I think shopping malls have their place they do all look the same inside don't they? I mean, you wouldn't know you were in Cyprus as oppose to Birmingham.

When we were in France last I said to my husband "are we going to the autofleur?". He had hysterics. It turned out I meant the carrefeur.