Four days back in Cyprus already

It's Summer, which is my official estivation time, so I'm not doing anything very energetic. I do have several things I should really catch up on - the accounts for the past couple of months, for instance, or a huge pile of books which I read while in the UK, that need to be entered into the various places I list books, and reviewed on my book blog. 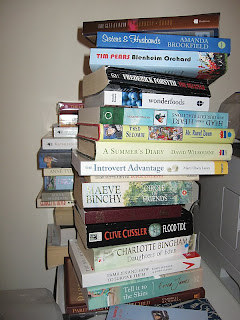 I did write (with pen and paper!) reviews of all the books I read while away, and kept a note of all the money I spent... but somehow it's hard to get motivated to do these things, even though I'm in my air-conditioned study, and they're all computer related.

The weather is hot, of course... around 32C in the shade. But to my surprise (and great relief) it's not very humid. A little sticky, but if I go outside, or am in a room where the aircon isn't switched on, I don't feel drenched. This is a great bonus, and I am thankful!

I did do a fairly major clean of the house on Thursday, and have done three loads of laundry since coming back to Cyprus. Yesterday evening Richard and I swept and mopped the outside stairs and the patio at the front, both of which were looking rather grubby. We used a mop and bucket, of course, although some of our neighbours told us we should really use a hose... when Richard said that there's a hosepipe ban, and that it would waste water, they just shrugged and said (with truth) that everyone else uses them!

Today, Richard has gone sailing - as he usually does on a Saturday - and I've had time to myself. I have finally succumbed to the lure of Facebook - prompted in part by Tim saying he would play Scrabble with me online if I did. I'm still not entirely sure what the point of a social networking site is, other than to network socially... and to waste inordinate amounts of time playing word games!

However, if anyone reading this (a) has a Facebook account and (b) knows me well enough to know what my surname is [so you can find me there!], then please feel free to add me as a friend if you would like to.
Posted by Sue at 17:14

Glad you're back home safely.

I miss reading books. Apparently I unconsciously gave that up when I went back to work!

No, I haven't used Facebook, but I hear it's great for finding old friends/schoolmates, and for checking out prospective employees/coworkers.

Glad you had a nice vacation. Now it seems you are back to housekeeping.
I, too, love books. I have not been reading enough to suit me. I always say I'll read more when it is too cold to go outside.
Summer is my chance to get used books and they do pile up !!
Slow down.
Betty G

You've just got back, and we're about to go on holiday. 32 degrees sounds quite nice, pleasantly warm in fact. I thought you had much hotter summers than that over there!ustyv

It is a little warm here in the hills of Polemi today, the breeze has taken a while to realise it should be cool ;)
Nice to meet you
feel free to visit my blog
I have a stack of books like that in my house!
Glynis

Its seems to be that you have keen interest in reading books.