The first week we were back in Cyprus, it was hot - of course - but not humid.

Wonderful, I thought. July is usually the worst, and I managed to be out of Cyprus for July. Perhaps the humidity had gone for the season.

Silly thing to think, of course. Last week, the humidity came back with a vengeance. Even at 6.30am the air felt damp. If I went out anywhere, I was dripping by the time I'd been out for about two minutes. When I took a shower, I felt refreshed at first... but it was hard to know whether the towel had any effect at all in getting dry.

I don't know why high humidity is so exhausting, but it is. Everything takes about three times as long to do, and I just want to flake out as much as possible. Thank goodness for air conditioning; however, we don't want to be extravagant, so generally I just run it during the daytime in my study when the computer is on (since computers don't do well in temperatures of 30C or higher) and in our bedroom for about two hours as we're going to sleep. We run it at 28C, which feels pleasantly cool compared to the outside and, most importantly, removes the humidity from the room.

As for the cats, I feel sorry for them in their fur coats. Sophia usually follows me around wherever I go, so if I'm in a cooler room, so is she. Cleo usually stays upstairs, delighted when anyone flops on the bed, since she comes to sit on top of us. And Tessie, whose coat is the longest, lies in remarkably ungraceful positions, usually on the tiled floors.

Here's Cleo, trying to get comfortable on one of the chairs - she's in the living room, for a change, but never did learn how to sit elegantly: 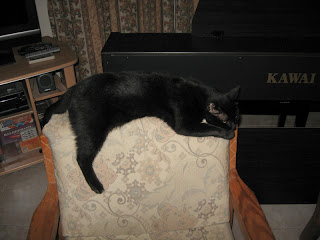 Yesterday and Saturday were probably the stickiest days so far. Then, last night, it felt as if a storm was brewing. There were strong winds, dust blowing about, apparently even some lightning.

No rain, of course. It would be most unusual to have rain in August. But, thankfully, the humidity does seem to have dropped. At 7am this morning the weather outside felt much more refreshing than recently, and when I walked to the PO Box and back to check mail, about a mile in each direction, I only felt slightly sticky.

I suppose it's too much to hope that there won't be any more unpleasantly humid days this summer, but today does feel much pleasanter than recently. I am thankful.
Posted by Sue at 14:52