Update on plants during summer

After six weeks in the UK, I was a bit concerned about the plants on our front porch. Richard said he had kept them watered when he remembered, and that one set of visitors in the guest flat had done some watering. But then some more visitors came, who forgot about watering the plants... and Richard didn't notice until his last day in Cyprus before joining us in the UK, when he was showing our cat-sitter how the hose works.

So he gave them plenty of water, and hoped that she would remember. With the temperature being over 30C every day, and sunshine for fourteen hours, most of them simply wouldn't have survived without water at least two or three times per week.

However, they all seem to be fine. This one, whose name we never did discover, has one or two yellowing leaves, but otherwise looks healthy: 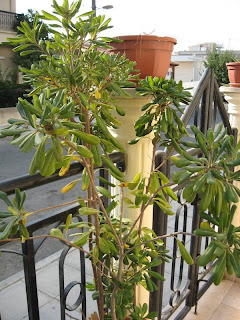 This one, which did very badly at our other house - and which we nearly didn't bring with us when we moved two years ago - is thriving in this position: 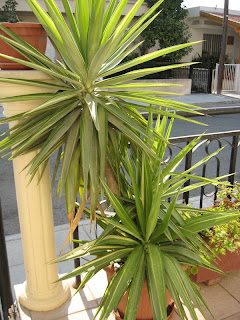 The geraniums look rather sad, although I think they're still alive: 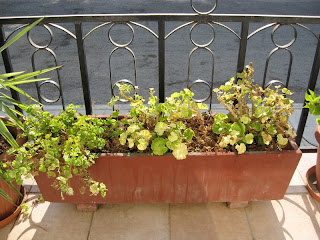 The bi-coloured bougainvillea, which thrives on minimal water, seems to be perking up after looking rather bare during the spring: 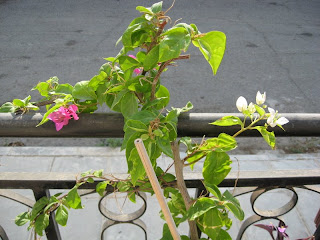 The orange tree, I'm happy to report, has an orange (yes, just one, but then we've only had the tree for two years) which should change colour in a few months. There were a lot more little ones earlier in the year, but most of them fell off. However, this one looks like a survivor: 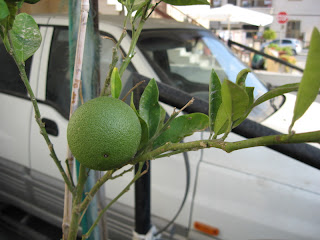 And then there's the fig tree. Last year, there were three or four figs at this time of year, but they all shrivelled up and fell off. This year, there are more: They're green and quite hard still, so I assume they're not ripe. And yet, this is the season for figs. I've seen them in the froutaria, and I've heard a man driving around selling them (it took us a while to realise that the doleful cry of what sounds like 'SEEKAH...' is actually the Greek for figs (συκα) .)

Does anyone know how we can tell when they're ready?
Posted by Sue at 14:21

I came across the following description for determining ripened figs:
Q. How can I tell my figs are ripe?
A. There is an old Spanish proverb: A fig is ripe when it has a hangman's neck (droops), a mourner's eye (oozes honeydew from the eye) and a penitent's robe (skin tears). In practice, a drooping fig is a ripe fig.

I almost forgot to add a link to a very nice article with some fig care pointers and delicious fig recipes: http://www.google.co.uk/url?sa=t&source=web&ct=res&cd=6&url=http%3A%2F%2Fwww.joanneweir.com%2Fpdfs%2Fweirartifigs.pdf&ei=llq0SOf2II2YQ7LjqNAI&usg=AFQjCNExy0J-lYMtXBHJGsCdKdkaWBe9Ag&sig2=IteFE_ZxIXZoU-XwqyqMbg