We had eight figs hanging on our little tree, on the front porch.

One fell off, having burst open and hardened. So then there were seven...

Today, we decided that one of them was ready to be picked. It started to hang downwards, and felt soft. It didn't pluck as easily as I expected, but a quick twist and it was off the tree.

Richard washed it, and cut it in half: 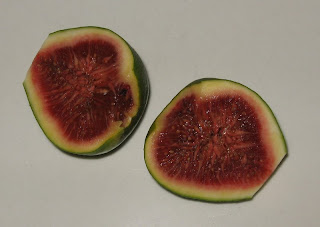 I'd like to say that my half was the best fig I have ever tasted, but honesty compels me to admit that it wasn't. Not by a long chalk. It was actually rather flavourless, and not particularly sweet.

Still, it was the first.

Unfortunately most of them are rather small, speckled and hard. I suspect that, like the first of their siblings, they may just split open and drop off.
Posted by Sue at 16:36

We have a couple of fig trees in our garden, but I think they've been cursed.

Hi, I have greatly enjoyed reading your blog this evening! :)

Sorry to bother you, but i'm going to be cyprus next month for a brief holiday. I realize that weather wise it isn't the best time but stress wise it's perfect for us! :)

We will be in limassol (like probably all tourists) and will have access to a car the entire time. I will be picking up a tour guide (lonely planet probably) tomorrow but was wondering where and what you recomend people see in Cyprus. When we're done decompressing (usually about a day) where should we head out to?