We seem to have had more rain in the past few months than I can remember in recent years. Apparently it's still under average for the season. At the start of January, one of the free Larnaka magazines reported that the reservoirs were still only 4% full.

Over the weekend, we had a lot of rain. Or so it seemed. British style light rain for most of the morning, with some Cypriot style heavy rain later on. Our roof leaked over the stairs, as usual, and there was even a small puddle on the floor in Daniel's room. Evidently we need to get someone to look at the roof again soon.

On Sunday, it was still a bit grey, but looked fairly dry when I set out to walk to a church service. However, when I had rounded a couple of corners, this sight met my eyes: 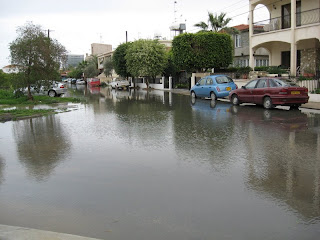 It wasn't a new sight. I saw flooding like this a couple of years ago and it was easy enough to take a detour along a street that is less prone to flooding.

Since then, the sun has been out and the temperatures up to 20C, so it's all dried up. But I did wonder if the rain would have made any difference at all to the Cyprus dams.

I managed to find a brief article from the Cyprus Mail, saying that Dam capacity is up by one per cent. They are apparently now over 7% full, so evidently there's already been some increase during January. There's snow on Troodos too, which will melt and provide more water in the spring.

7% is still very, very low. As far as we know, tankers are still coming regularly from Greece to bring more water to Limassol. And - as is clear from that Cyprus Mail article - nobody in authority really knows what to do.

In the meantime, we're still restricted to mains water for about ten hours every other day. With our tank filling up three or four times per week from the mains, we haven't yet run out. I'm not sure if these restrictions are actually making any real difference, other than to remind us to be careful.
Posted by Sue at 20:18